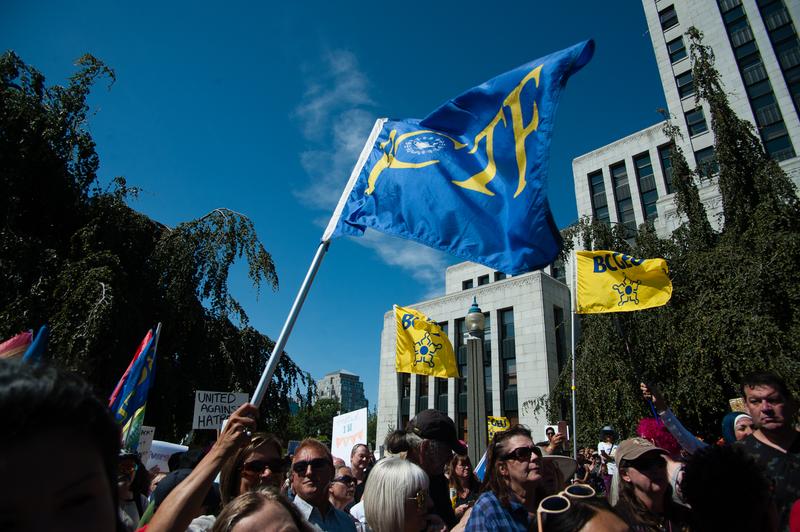 This afternoon, thousands of people gathered at Vancouver City Hall to protest against an anti-immigration rally planned by the Worldwide Coalition against Islam (WCAI). However, as announced by the protest’s emcee at 2:30 p.m., the rally ultimately failed to take place.

According to WCAI Canada’s Facebook page, it was delayed until August 29 instead. This information was posted yesterday afternoon.

Organized by an adhoc group called Stand Up to Racism Metro Vancouver, the protest featured a carnival band and nearly 20 speakers from diverse backgrounds. Over three hours, they offered different perspectives on the concepts of identity and discrimination. They addressed issues ranging from the historical and contemporary mistreatment of Indigenous people, to multiculturalism, to anti-semitism and Islamophobia.

The crowd at the counter-protest at #cityhall pic.twitter.com/HSusLrfWRK

“Apathy escalates hate … Show up, speak up and speak out ... Dismantling white supremacy has to be the work of white people ... Silence is violence," said one speaker.

“We don't want war. We must show tolerance,” said another speaker. “We can do this a better way ... No fighting!”

These sentiments were also echoed in speeches and letters from official leaders, such Vancouver Mayor Gregor Robertson and BC Premier John Horgan. At the same time, a commitment to stand against hatred was reiterated. 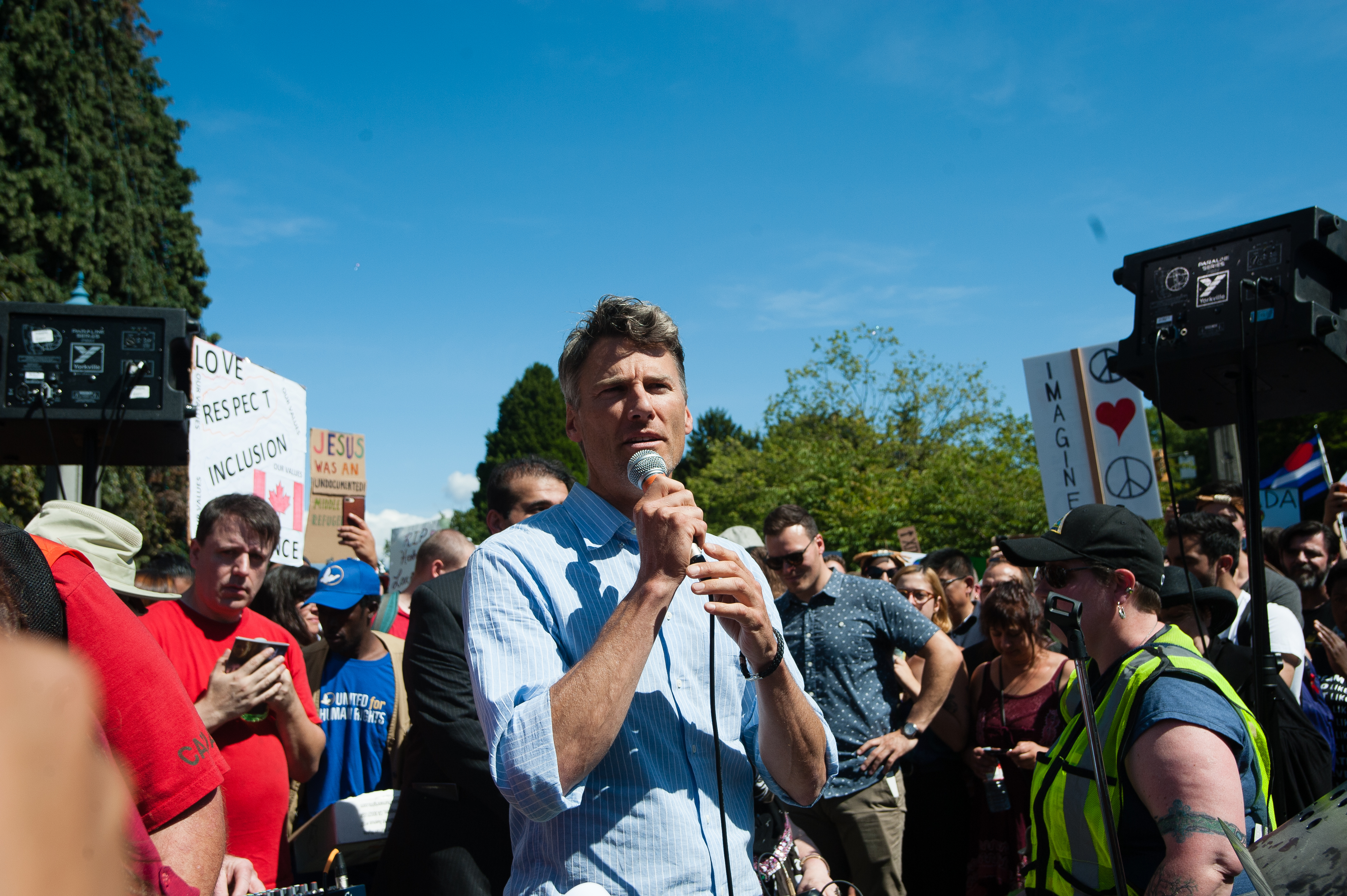 In response, the crowd — which included many UBC students, faculty and staff — was in high spirit.

“I think it was great,” said Reana Deng, a graduate speech language student at UBC. “They only had a short time for organizing, but they managed to get amazing speakers.”

The Ubyssey also spotted a group of students held up a sign that reads “UBC students stand in solidarity with UVA,” referring to the University of Virginia, the site of a violent white nationalist march this month. One of the students, Jess Boon, said that she was inspired to make a stance after seeing the bravery of the activists at UVA.

“They were young people who put their bodies, lives and safety on the line to stand up to bigotry and hate,” she said. “I thought it was important for us as UBC students to display solidarity with them and the people at Charlottesville … We’ve created our own calls to action for community and business leaders and other spheres of the public. We’re also organizing our own direct action activity where community leaders can write down their recommendations and calls to action for politicians, for business, and for universities.” 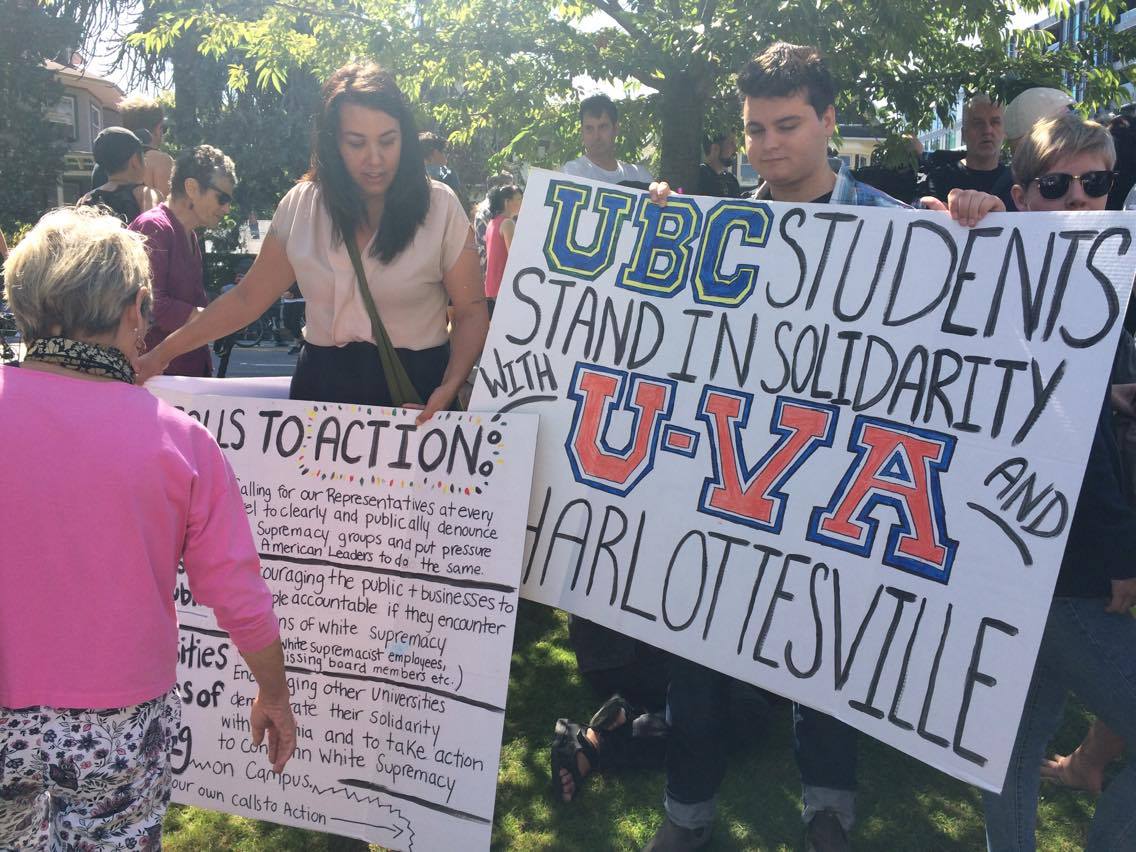 However, since a full protest didn’t take place, it was also viewed as a quiet affair for some attendees.

“For the most part, it was very quiet — the kind of counter protest where people could bring their kids and dogs. There were old people there too so it was a friendly affair,” said Juliet O’Brien, a lecturer in the French, Italian and Hispanic studies department at UBC. She said she was in attendance along with at least half a dozen UBC staff and faculty members in order to show that UBC “really is a place of diversity and solidarity” for students.

Still, minor occurrences of opposition to the protest could be spotted.

“[The Nazis] weren’t as bad as we were told,” said Brian Ruhe, a white nationalist who runs a YouTube channel laden with right-wing conspiracy theories, to The Ubyssey.

Ruhe stated that he was at the protest to support the WCAI and CAP because “they care about the white race in Canada,” although he doesn’t have anything against Islam himself. He said that he is personally against the “Rothschild-Zionists” — a “globalist Jewish power” who supposedly aim to “reduce the world population to half a billion.”

In his confrontation with a Jewish protester, Ruhe denied that the Nazis killed 6 million people in the Holocaust, which he claimed is a “hoax” that has been “scientifically debunked.”

In response, the Jewish protestor referred to him as “fucking Nazi scum.” Ruhe was then escorted away by the police.

In other parts of the crowd, a man was filmed having a shouting match with white protestors about why they feel responsible for slavery despite not owning slaves. A confrontation about Islam and Islamophobia was also filmed.

These two young Muslim women are standing up to an anti-Islam protester. "We condemn anybody that murders," says one woman. #Vancouver pic.twitter.com/hNvguNEehL

In the wake of recent events in Barcelona and Charlottesville, UBC President Santa Ono has released a statement denouncing hatred and xenophobia.

“These incidents are antithetical to the very fabric of a just society,” he said. “In particular, they are antithetical to UBC’s commitment to diversity and inclusion and to the values we hold and champion as an academic institution. We must remember that Canada is not immune to similar challenges and we must work together to build a just and inclusive society.”

Although his statement did not mention the protests in Vancouver, it echoed the protest’s message of diversity and inclusion.

In response, UBC students and faculty at the protest viewed the message as “a step in the right direction.”

To further the effort, Deng suggested that the university could host its own anti-racism rally or speaking events.

Meanwhile, O’Brien recommended that both the students and university read the Southern Poverty Law Centre's guidelines on dealing with the alt-right to prepare for rallies or protests on campus. She ended the interview by offering assurance of support for students.

“Students should know that there are faculty that would follow in solidarity with them,” said O’Brien. “They should come talk to us — if you’re stressed out by this, come see us.”