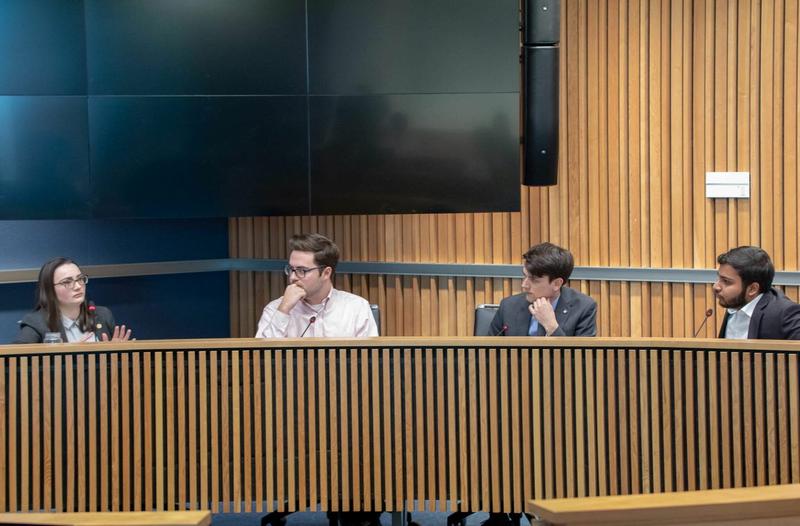 At their first debate, the four UBC Board of Governors candidates chased one another’s tails on policy, avoiding direct clashes over policy. Zubair Hirji

At their first debate, the four UBC Board of Governors candidates chased one another’s tails, avoiding direct clashes over policy.

That meant instead of duking it out over policy, most of the debate was spent quietly sparring over who is best for the job.

Malone, a two-time Board representative who’s now “running for round three,” cast herself as the voice of experience. She helped spearhead this year’s campaign against tuition increases, but said she wouldn’t make it a habit — unless UBC fails to consult students.

“As a governor you’re elected to represent students, but you also have a duty to fill the best interests on the university. “You have to pay bills. They go up every year.”

“I think we would all like to pay less money to go to UBC,” said Braam, the current law representative on AMS Council. Braam has a reputation for “asking tough questions” in his oversight role as chair of the AMS governance committee — something he repeatedly promised he’d bring to the Board.

Holmes, the current AMS VP Academic and University Affairs and student senator, says his advocacy would draw more from consultation.

“If there are tuition increases, there has got to be accountability for those increases,” he stressed. Holmes highlighted his history of lobbying the Board, pointing out he already has relationships with many Board members that could be leveraged for advocacy.

Quadre, a newcomer to student government, was the only candidate to speak at length about mental health support on campus — something the Board has been more engaged with this year.

But his lack of experience was also a disadvantage. He asked what UBC would do in reaction to the legalization of cannabis, seemingly unaware that a policy was already implemented in October and finalized earlier this month.

He also appeared to confused the AMS Sexual Assault Support Centre (SASC) with UBC’s sexual assault response office, which was a problem in a debate that hinged on the upcoming review of Policy 131, UBC’s sexual assault policy which still has many gaps following its first year of implementation.

Malone currently chairs the committee that oversees the policy and said she’d like to see consultation with students and staff reflected in a new policy draft.

Holmes and Quadre both dug in on SASC being recognized in the policy.

“That survivors have to go to SVPRO to get accommodations and can’t use SASC is not right ... We have to allow [survivors] to use whatever service they want to use,” said Holmes. A vocal advocate for Policy 131 reform and a self-identified survivor himself, Holmes stressed that consultation with survivors should inform any policy changes.

“It’s just a complete jumble,” said Braam of the current policy. “You want help, and instead you’re being forced to navigate UBC’s byzantine organizational structure.”

All candidates said they wanted to expand engagement with Indigenous communities and agreed the Board’s efforts to date have been insufficient, but were vague on how exactly to do that.

The only major promise came from Braam, who said he’d lobby for representatives from the Musqueam and the Syilx — the two First Nations on whose unceded territory UBC and UBCO are located, respectively — permanent spots on the Board.

Beyond that, candidates avoided rocking the boat or each other — making the debate more about resumes than results.

BoG candidates will meet again at the Great Debate this Friday in the Nest.