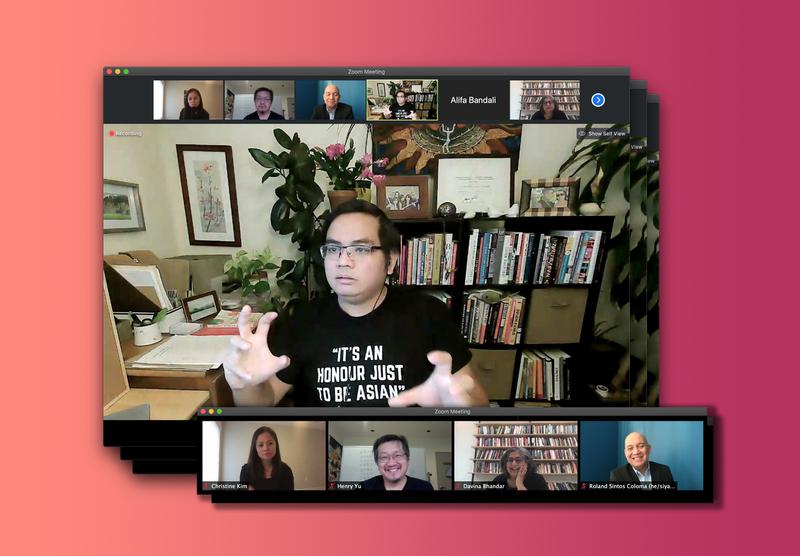 The panel was co-sponsored by the Asian Canadian and Asian Migration Studies Program. Jasmine Foong

A Social Justice Institute panel on November 18 reflected on the dialogues and developments surrounding anti-Asian racism in the last decade, after a highly controversial article on certain Canadian universities being “too Asian,” published in Maclean’s in 2010.

A UBC student and Ubyssey alum Stephanie Findlay co-authored the article, which referred to universities’ large Asian student populations as a deciding factor in picking which schools to attend.

UBC, along with the University of Waterloo and the University of Toronto were named as schools that were "too Asian.” The authors argued that this would impinge on the social life on campus, utilizing the model minority myth of high-achieving, workaholic Asian students.

Kim, associate professor in English language and literature at UBC, framed the article as a non-explicit form of racism, which takes more work for the reader to uncover.

“[In the article] we have the normativity of whiteness being reinforced, the idea that here is a kind of invasive Asian presence ... foreign and encroaching upon Canadian universities in a kind of space that doesn't belong to them,” Kim said.

The question of a university being “too Asian” was examined in other contemporary contexts by Coloma, professor in the College of Education at Wayne State University.

“Is ‘too Asian’... only bad when it threatens the entitled, privileged, spaces and opportunities of white Canadians?” said Coloma. “Or is it okay to be ‘too Asian’ or ‘too BIPOC’ in fields like health care ... for them to sacrifice their lives so long as it’s in the service of Canada and its ‘rightful’ citizens?”

“Is ‘too Asian’... only bad when it threatens the entitled, privileged, spaces and opportunities of white Canadians? Or is it okay to be ‘too Asian’ or ‘too BIPOC’ in fields like health care ... for them to sacrifice their lives so long as it’s in the service of Canada and its ‘rightful’ citizens?”

While reactions to the 2010 article were strong and ignited subsequent activism, including among students and faculty at UBC, Bhandar, assistant professor in political science at Athabasca University and co-editor of “‘Too Asian?’: Racism, Privilege, and Post‑secondary,” examined the nuances of claiming inclusion on stolen Indigenous land.

“How do we strategically organize to confront an anti-Asian racism that is rooted in settler colonial structures of power that have informed ... the foundations of our post-secondary institutions?” asked Bhandar.

Yu, an associate professor in history at UBC also emphasized the importance of keeping in mind that all non-Indigenous people are guests on unceded territory, a position which comes with inherent etiquette practices.

In fact, “[being] ‘too Asian’ might not be a statement of non-belonging that we want to get rid of. [Instead,] non-belonging can be the centrepiece of a form of belonging that isn’t a nation-building belonging” that is anchored on the settler colonial state, said Yu.

In an interview after the event, Yu clarified that the article should be seen as a failure of the university, rather than a personal failure of the journalists.

“The fact that [someone] could be a UBC student for four years and write [the article] with almost no clue of how devastating it would be … that is an institutional thing,” he said.

In the event, Yu questioned whether we are doing better at UBC regarding anti-Asian racism, ten years later.

The panelists expressed varying views, but agreed that while some significant changes are evident and applauded, they are still not enough, especially in view of the recent increase in anti-Asian hate crimes in Vancouver due to the pandemic.

“And as we know, higher education is not immune to racist prejudice and discrimination,” said Coloma, listing McMaster University, Queen’s University and University of Waterloo as examples of where pandemic-related crimes have been reported.

Catungal alleged that at least one anti-Asian hate crime due to the pandemic has also happened on the UBC campus through vandalized posters in a science building.

But one difference that Yu noted after the event, is the increased collective consciousness of racism in its many forms.

“I don't think it would be as surprising and shocking that there was a backlash against this — that if you are a student now at UBC and you choose to say that UBC is ”too Asian,”... you would be quite conscious of the pushback,” said Yu.