As part of The Future of Food Dialogue series, UBC hosted a triple book launch where panelists emphasized the need to go beyond charity to resolve food insecurity.

Pulling from their respective books, the panelists discussed the concepts of food sovereignty and the right to food, the role of public policies in alleviating hunger and the consequences of leaving the solutions to businesses and charities.

Desmarais, who is currently the Canada research chair in human rights, social justice and food sovereignty, defined food sovereignty broadly as the right of nations and people to determine their own food system, food environment and food culture.

She said Public Policies for Food Sovereignty highlights empirical research on food sovereignty institutionalization to contribute to the growing literature on the topic, as well as the “questions and contradictions” raised within it. With case studies from around the world, the book offers an interdisciplinary look through contributions from geographers, political scientists, anthropologists and sociologists.

“Many of the contributors were graduate students at the time of writing — out of the 15 contributors, 7 were doctoral or masters research,” said Desmarais.

“So the empirical research was fresh and it was exciting.”

More specifically, the book examines the challenges associated with state-led initiatives, social movements’ efforts to interact with public policies, and the challenge of achieving the prerequisites of food sovereignty itself. 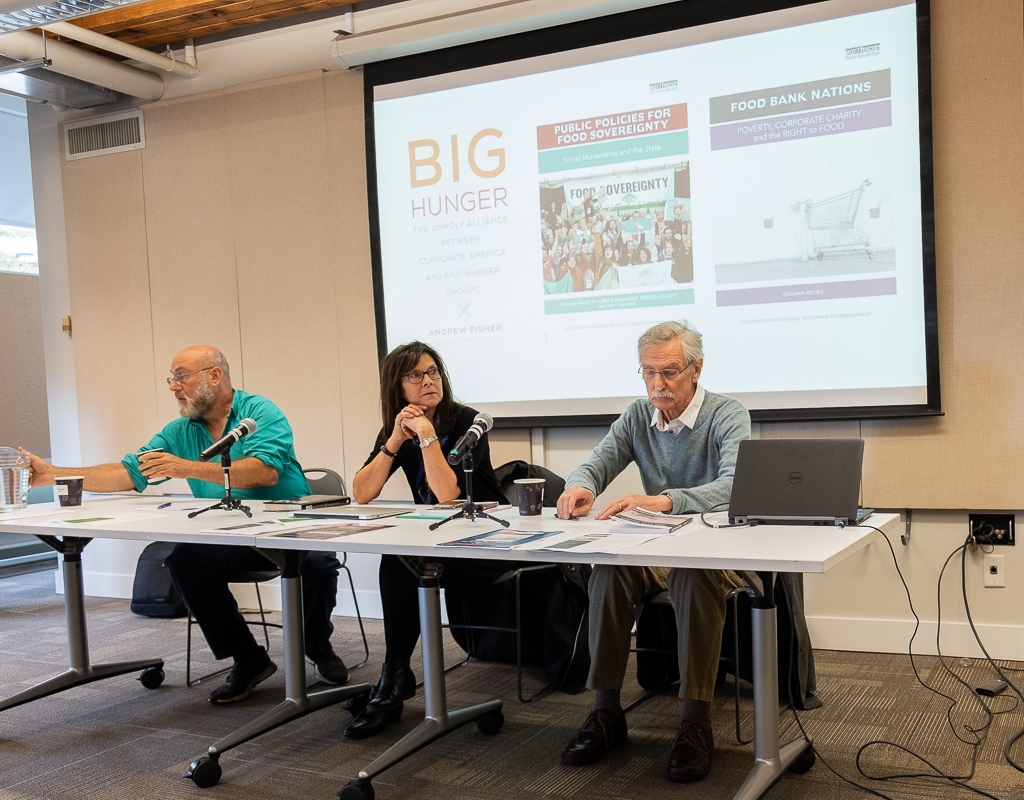 As co-founder of the US-based Community Food Security Coalition, Fisher spotlighted the “hunger industrial complex” in the United States. While noting that different government-led nutritional programs are “incredibly vital to the welfare” of many Americans, he described them as heavily reliant on major food companies due to “efficiency, convenience and low price.”

“They place the federal government in a tightly knit partnership with a highly industrialized and economic concentrated system, so the government bolsters a system whose negative impact on rural communities, family farmers and workers is well known,” said Fisher.

To move away from this complex, he suggested increased sourcing from locally produced goods as seen in farm-to-school programs, making the back-end of these nutritional programs more transparent and allowing for more food sovereignty.

“We need a new vision and a new coalition to move federal food programs from just supporting those special interests and to re-situate them so they are fully in the public interest,” Fisher said.

“These programs need to be modernized.”

An emeritus professor of social work and former director of UBC’s School of Social Work, Riches stressed the importance of re-politicizing the issue of hunger instead of relying on food banks, noting that its primary cause is income poverty — not lack of food.

He also pointed out that Canada is a “state party” to the International Covenant on Economic, Social and Cultural Rights, which “[recognizes] the right of everyone to an adequate standard of living ... including adequate food.”

“It’s not that people shouldn’t give to food banks — I’m not arguing that — it’s clearly a moral imperative to feed hungry people,” he said, acknowledging the differences between emergency relief centres and corporate food banks.

“But that is not what actually the right to food is about, and it actually allows people to sort of look the other way.”

Instead, Riches called on civil society and activists — in particular young people — to “reclaim public policy” and change the paradigm from food charity to the right to food. During the later Q&A session, he also called on food bank volunteers and journalists to critically examine the issue through this lens.

“Food bank volunteers … for every parcel, there should be a tweet or a text or a message going to the local politician and the government and say ‘We’re doing our best, why don’t you do yours?’” he said.

“We all know that people need to have money in their pockets if they are going into a store and buy the food of their own — that’s what the right to food is about.”