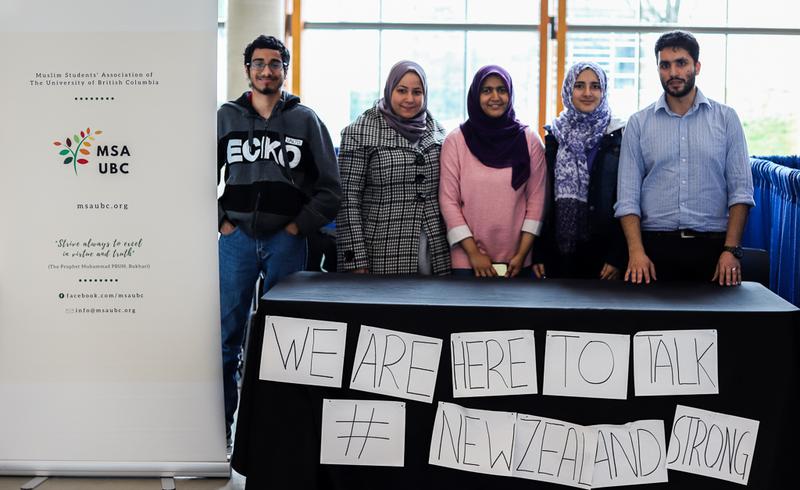 The UBC community is expressing its solidarity with Muslim members following a terrorist attack at two mosques in New Zealand. Alex Nguyen

UBC is standing in solidarity with the global Muslim community following a terrorist attack at two mosques in New Zealand.

This morning, a white nationalist gunman opened fire on two mosques in Christchurch, killing 49 and injuring 48 people who were attending Friday’s prayers. It was one of the worst mass shootings in New Zealand’s history.

Student groups have responded to the attack with condolences for those affected and with condemnations of Islamophobia and white nationalism.

“What we can do here today is stand strong,” said Sultan Owaisi, a chaplain assistant for the Muslim Student’s Association UBC (MSA). “Today it’s the Muslim community that’s affected, and we’re standing strong. In the past it’s been other communities who are affected, and we stood strong with them.”

“We ask that you keep the individuals lost and those who are struggling to stay alive in your prayers; Islamophobia has no place in our world,” said Solidarity for Palestinian Human Rights UBC in a statement issued on Facebook.

UBC has released a public statement in response to the attack, and the Equity & Inclusion Office reiterated its “commitment to ensuring a welcoming and respectful environment” and offered resources for students who have concerns about physical safety or mental well-being.

“As a university, we are united in our commitment to fight hate in all its forms, including xenophobia and Islamophobia,” said UBC Equity and Inclusion VP Sara-Jane Finlay in the statement.

My thoughts are with New Zealand and the Muslim community at UBC, in Canada and around the world following the horrific violence. Islamophobia is simply unacceptable and we must all do our part to counter the racism that lies at its core.

In response, MSA members said they were moved by the “outpour of support” by the university, faculty and peers.

“I remember when I first found out, I went straight for prayers ... I broke down earlier today during the prayer,” said Hafsa Zahid, a coordinator for the MSA. “There were people beside me I didn’t know just giving me random hugs. It broke me down, and I just started crying so much."

She and Owaisi also expressed their appreciation for the increased presence of security at prayers.

“I don’t think it was fear that stoked the security, but having them around was as show of support on its own, just to know that UBC cares,” Zahid said.

“We all know each other and we all live here and the community at UBC is thankfully very safe,” Owaisi added. “It was more the solidarity and the support because that’s what we really need right now.”

To continue the stand of solidarity with the Muslim community, there will be a support circle today at 5:30 p.m. in Irving K Barber Library in room 261.

There will also be a vigil at the Al-Jamia Mosque tonight at 7:30 p.m.

“I think it’s beautiful,” said Zahid. “The support is beautiful.”