UBC discusses race and belonging as tribute to interned Japanese-Canadians 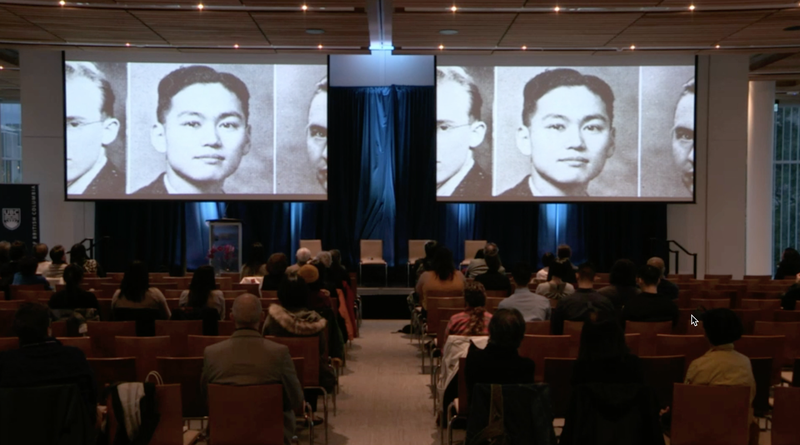 76 Japanese-Canadian students were expelled from UBC during this period. Lawrence Ge

Yesterday, UBC hosted a Day of Learning to commemorate the 75th anniversary of Japanese-Canadian internment, which saw the “mass exodus of 23,000 Japanese-Canadians” during the Second World War and their forced relocation from BC following the war.

The event also marked the the fifth anniversary of the honourary degree ceremony for the 76 Japanese-Canadian students, who were expelled from UBC during this period.

Notably, prior to their expulsion, the Japanese Student’s Club sent a letter to The Ubyssey on January 9, 1942, asking for acceptance from the wider community on behalf of its Japanese-Canadian members.

“We have avowed unflinching allegiance to Canada … Where else would one find … so much thoughtfulness, tolerance and friendliness as we enjoy in America?” read the letter.

Still, they were expelled in the following month and were subsequently removed from the province along with thousands of other Japanese Canadians.

Comprised of four different events, the Day of Learning explored topics of race and belonging, with the Japanese-Canadian internment as the focus of dicussion. The opening panel focused on how one can learn from this history in order to resolve today’s issues of race.

Human Rights Activist Mary Kitagawa recounted her experience of living through Japanese-Canadian internment, which was described as similar to “living like animals” or “being treated like criminals.”

Professor Dr. Henry Yu, a specialist in Asian Canadian history, explained that the condition was a successful implementation of ethnic cleansing by the provincial government.

“The BC government sold their property and belongings so that they had nothing to come back to,” said Yu. “That’s why the majority of Japanese Canadians never returned to BC.”

He also pointed out that Japanese Canadians were kept out of BC for another four years after World War II, thus questioning the government’s justification of security in the first place.

“That needs to be talked about, because it really points to larger issues,” said Yu.

The second event gave insight into the experiences of today’s Japanese-Canadian activists, and the third delved into past and present legislations and how law can be used as a means to discriminate.

“There is a tentative to go back and say these are all things that won’t ever get repeated again,” said Dr. Ben Goold, a law professor at UBC. “That’s just not true … Canadian society and many democratic societies are rife with examples where law issues are a tool of exclusion.”

The final event explored racism more holistically. The panel examined Canada’s history of discrimination beyond Japanese-Canadian internment in order to find answers to today’s problems of race and belonging.

“This conversation is really about understanding who who we are [in] a country that was built around exclusion,” said Yu in his public address.

In an interview with The Ubyssey, Yu then posed a question with regards to the Indian Residential School System, another discriminatory system that has had long-lastinge effects on the targeted population.

“Why is it that … we need so much public education for people to even be aware of its devastating effects?” said Yu. “It’s because of what we learned about what Canada is, that we have to do a bunch of unlearning.

“It’s a Day of Learning, but I would actually say, often it’s as much about unlearning. Unlearning certain ideas of what Canada’s for, who it’s for and who belongs.”