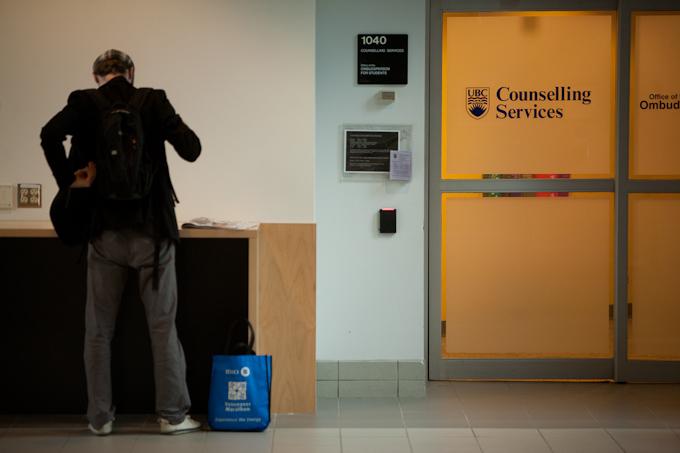 UBC is making a $2.5 million annual investment in counselling services with the hope of shoring up long wait times and a lack of diverse expertise among counsellors.

UBC Counselling has been criticized previously for insufficient mental health services. An AMS survey found that just 36 per cent of students reported feeling satisfied with their experience with UBC Counselling; 35 per cent reported feeling dissatisfied. The 2014 UBC budget letter to the community addressed the problems as well, noting that “student services are over-subscribed, in terms of wellbeing programs” and that the “eroding [of] public funding continues to present very serious pressures.”

Mental illness represents the largest burden of disease affecting B.C. post-secondary students — 25 per cent, according to the 2013 National College Health Assessment. Mental illness is the fastest growing disease as well, having increased 30 per cent in the last 20 years. It was also found to be the most detrimental impact on academic performance.

The $2.5 million investment is recurring and sourced out of the 20 per cent fee increase to eight-month Winter term housing fees the UBC Board of Governors approved in February 2015.

The first million will double the number of existing counsellors to 18, while the remainder will go towards long-term initiatives and other hires to address program and service gaps identified through a consultation process currently underway.

“The ratio of counsellors to students at UBC right now is much worse than at other institutions,” said Jenna Omassi, VP Academic for the AMS. “Counselling has to turn away a large number of students, so ensuring that number can go down … is the hope.”

According to UBC budget documents, counselling services investment has been increasing by an average of 9.1 per cent over the last three years, each year adding a new counsellor. UBC allocated approximately $1.4 million to counselling services for 2014/2015, about 11 per cent of the VP Students budget of $14.9 million. It’s the fourth largest investment in the 12 budget lines in the portfolio.

Cheryl Washburn, director of Counselling Services, says the selection committee for the new hires is in the process of shortlisting and beginning interviews already. Students, academic advising staff, student services staff and counsellors sit on the committee.

Omassi and Washburn both sit on the steering committee for the investment into student health and well-being. The committee brought in external consultant Keeling and Associates who advised on the selection criteria for hires, but is also in the process compiling a list of recommendations for the future.

“Based on UBC specific demographics, data, operational statistics, we have identified areas where we believe it is important to increase the level of support,” said Janet Teasdale, managing director of Student Development and Services.

Another commitment made at this time includes the hiring of two disability advisors for Access and Diversity, up from four. Teasdale says it “will significantly decrease the number of clients for each advisor and improve our ability to support students [by reducing] the caseload for advisors by 33 per cent, assuming that client numbers remain similar.”

A space between Marine Drive Residence and Totem Park Residence is also being renovated for a second Counselling Services location for the 2015/2016 school year.

UBC Walkalong, an online mental health companion that is self-described as “a community where young Canadians can explore their mental health amongst their peers” is led by a team of UBC researchers who are working with Counselling Services to create an e-clinic to provide more support. These discussions are ongoing.