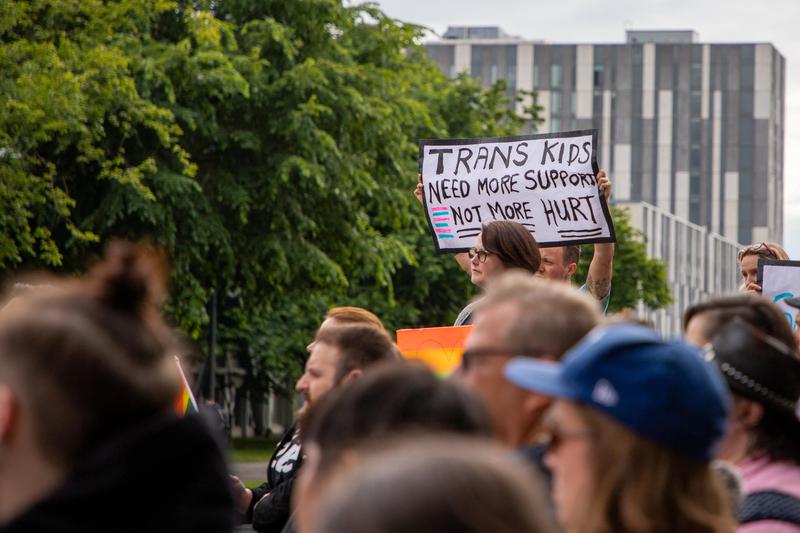 Announced half a year ago in February, the Equity & Inclusion Office (EIO) Trans, Two-Spirit and Gender Diversity Task Force is continuing to support the needs of trans, two-spirit and non-binary people at UBC. Although groups on campus such as the Pride Collective exist to support 2SLGBTQIA+ students, these groups do not necessarily provide resources for faculty and staff.

“The task force is not just about making sure those folks and their needs are met on campus,” said Dr. Hélène Frohard-Dourlent, an EIO educational strategist supporting the task force’s operations. “It’s also encouraging the university to think as an institution about how it is creating an atmosphere that is supportive of gender diversity much more broadly.”

Shortly after its announcement, the task force, which is made up of UBC staff, faculty and students selected through an open call, encountered student criticism regarding its motivations.

“UBC as an institution feels the need to respond to attacks on its image rather than the well-being of the student body,” computer science and math student Chris Munn said in February.

Last summer, UBC allowed anti-SOGI speaker Jenn Smith to speak on campus despite community pressure to cancel the event. Students were concerned that the task force was the university’s attempt to avoid negative media coverage.

“I think there’s always the concern that when there is an announcement that is made that it’s about optics rather than actual work,” Frohard-Dourlent said. “I would say that I think how we will demonstrate that is through what the task force manages to accomplish or not.”

Dr. Leonora Angeles, associate professor at the UBC School of Community and Regional Planning and the Social Justice Institute, said that some may view the task force as less effective than a permanent office.

However, she also recognized the task force mechanism is necessary when it comes to gathering recommendations on issues concerning the gender diverse community on campus before communicating to university bureaucracy.

“Now, it’s about grunt work, right? Rolling up their sleeves to ensure that they engage with diverse communities of colour, BIPOC communities, Indigenous two-spirit communities not just here in Vancouver, but also in the Okanagan campus,” said Angeles.

The task force is currently working with a consulting firm to conduct an extensive evaluation of the experiences of staff, faculty and students.

According to Frohard-Dourlent, there hasn’t been a comprehensive report on the experiences of trans, two-spirit and non-binary people on campus. Conducting a campus audit will provide information to guide task force recommendations.

The task force also plans to invite gender diverse guests in leadership positions at UBC to have conversations about some of the things the task force can do to accommodate the necessary changes on campus.

With Santa Ono’s July 2020 announcement that UBC had updated room bookings procedures for controversial speakers, Frohard-Dourlent hopes the task force can act as a consulting body that UBC administration can turn to for insight before allowing a speaker that could harm trans communities to hold events on campus.

The university redirected request for comment back to Ono’s announcement.

“I would hope that there should be a situation that comes up that the task force would be consulted, or that they would be involved in helping the university make better decisions in terms of how to create a welcoming environment for everyone, regardless of gender,” Frohard-Dourlent said.

But with COVID-19, fulfilling these goals has been difficult.

The task force has since halted plans to engage with Indigenous two-spirit communities due to the pandemic.

“Our biggest concern right now is that it’s hard to engage folks in this time, because I think it’s harder to digest online engagement,” said Frohard-Dourlent. “I think we’re all very aware that people’s energy and anxieties are taken up by other things.”

However, even without the pandemic, immediate institutional change is already difficult to achieve with layers of university bureaucracy and deep-rooted systems that all prevent an accommodating campus environment.

“That takes a bit of time, but I think part of it really is also that we took some time to think about what is it that we wanted to do that would be meaningful — that wouldn’t just be something that the university sort of put on a pedestal and say, ‘Hey look we’re doing this,’ but there’s not actually much follow through.”