Despite new action team, UBC has a long way to go on long-term solutions for food insecurity

“The food bank is super important and helps us deal with the hunger that can arise from food insecurity, but I would like to see us get to a point where we don’t even really need the food bank.” Rachel Cheang

Following years of rising AMS Food Bank usage, UBC has finally put together a dedicated team to alleviate the issue of food insecurity.

But with major gaps in existing data and short-term efforts focused on temporary fixes, the university is still in the early days of addressing the issue at its core.

First introduced at the September 14 Board of Governors committee meeting, the Food Insecurity Action Team (FIAT) brought together close to 30 students, staff and faculty from both campuses to tackle food insecurity at UBC.

“They’ve been very thoughtful about the diversity of people who have been asked to be part of this and even beyond the membership, there are clear plans to consult strategically with others,” said Dr. Candice Rideout, FIAT co-chair and a senior instructor in the faculty of land and food systems.

Since the first May symposium on the issue, the team has had four workshops over the summer to identify priorities and action items. So far, its work has been guided by UBC’s first set of official data on the prevalence of food insecurity amongst undergraduate students.

Administered by the university, the 2019 Undergraduate Experience Survey (UES) finds that 37 per cent of UBC Vancouver students and 42.3 per cent of UBC Okanagan students are food insecure. These figures are on par with those from other Canadian universities but are around three times higher than the national average.

Within these numbers, the UES finds that “international students, those identifying as transgender/non-binary, those with a mental health diagnosis and disability, and those primarily funded by loans are more at risk.”

In response, FIAT is endorsing a number of short-term measures that provide immediate relief to food insecure students. Some include opening a “low-cost” café in the Earth Sciences Building that offers $5 meals; launching a “Buy a Student a Breakfast” campaign in late November and enhancing an Enrolment Services-run program that offers Save-On-Foods gift cards when the AMS Food Bank is unavailable.

“This is something that’s really entirely based on taking actions in the relatively short term and continuing with that, so I appreciate that forward momentum and the focus on action,” said Rideout.

But despite these activities, much remains to be done to address food insecurity on campus, as student advocacy groups and Rideout herself noted.

Despite having a comprehensive understanding of food insecurity amongst undergraduate students, UBC lags far behind in data collection for other groups on campus.

“The university asks some more fulsome questions that were collected and the way that the government assesses food insecurity, so it’s great to see,” said AMS VP Academic and University Affairs Julia Burnham.

“But they do not have any data on graduate students, which is a huge issue.”

Based on The Ubyssey’s previous reporting, food insecurity is a major issue for graduate students.

According to the 2019 AMS Academic Experience Survey, 16 per cent of graduate students worry about running out of food monthly and 45 per cent experienced the concern at least once over the past year. Similarly, former AMS Student Services Manager Piers Fleming said last October the graduate student population is “disproportionately more affected” by food insecurity based on the AMS Food Bank’s data. 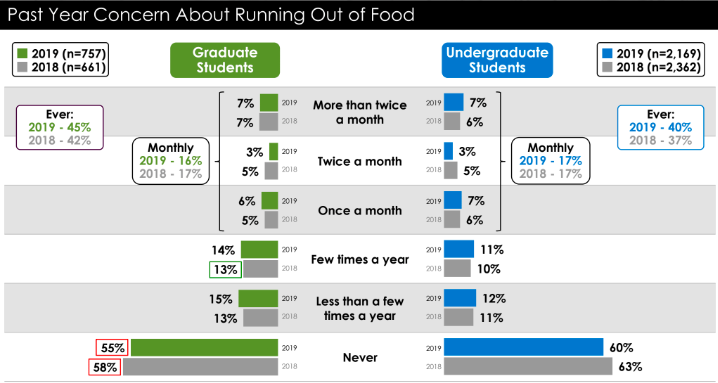 Meanwhile, there’s virtually no data for food insecurity amongst UBC staff and faculty.

“We have a little bit of anecdotal data for graduate students, but nothing whatsoever that we’re aware of [for] staff and faculty,” Rideout said.

But the Board document does acknowledge that staff and faculty who have “seasonal work, precarious employment” or a wage below $19.50 an hour — the living wage in Metro Vancouver — are likely to be at risk of food insecurity.

She added that the team would also rely on national data and extrapolate from sub-groups that staff and faculty might belong to. For example, the Canadian Community Health Survey shows that renters are more likely to experience food insecurity than homeowners.

As a result, a major priority for FIAT is laying the groundwork to gather and analyze comprehensive data on food insecurity amongst these groups. According to Rideout’s estimate, the full project would take roughly one year to 18 months.

“We’re in this stage of trying to figure out how these things could be resourced and that’s a conversation that’s ongoing,” Rideout said.

At the same time, there is a push for FIAT to dig into the root causes of food insecurity, such as the level of income versus the high costs of living and studying in Vancouver.

“When tackling food insecurity on this campus, you can’t go into it expecting to solve everything over the course of a couple of months,” Burnham said, pointing out that this shouldn’t be a “siloed effort.”

Graduate Student Society President Nicolas Romualdi similarly stressed the need to re-evaluate how UBC funds graduate students in the research stream. In particular, he believes they should be able to receive sufficient income through the university’s stipend and work as teaching assistants or lecturers.

“So we are doing something so that we help students who are food insecure right now, but how do we prevent food insecurity in the future?” Romualdi said.

On one hand, she said FIAT would explore advocacy efforts around affordability that go beyond tuition cost. On the other hand, it would also look for opportunities to collaborate with other universities and colleges to collectively tackle the issue of food insecurity in higher education.

AMS Food Bank usage has been on the rise since 2006. Screenshot AMS Board Submission

Besides these advocacy efforts, the team is also looking at the development of a digital and physical “food hub.” Intended to be a space that would provide resources and programming on how to increase food skills and knowledge, it’s different from the food bank model which is about relieving immediate needs.

“The food bank is super important and helps us deal with the hunger that can arise from food insecurity, but I would like to see us get to a point where we don’t even really need the food bank,” Rideout said.

Since the AMS Food Bank continues to see major increases in usage year over year, she acknowledged that this is unlikely to happen. Still, she believes this is an opportunity for UBC to “not just deal with the symptoms.”

“The real intent is not to stay in that space, but to acknowledge that people need support, that we need to be taking these immediate actions and … [look] at the broader question of affordability.”

This is an ongoing story. If you are a graduate student, staff or faculty who has experienced food insecurity during your time at UBC, we would like to hear from you. Please feel free to get in touch at coordinating@ubyssey.ca.