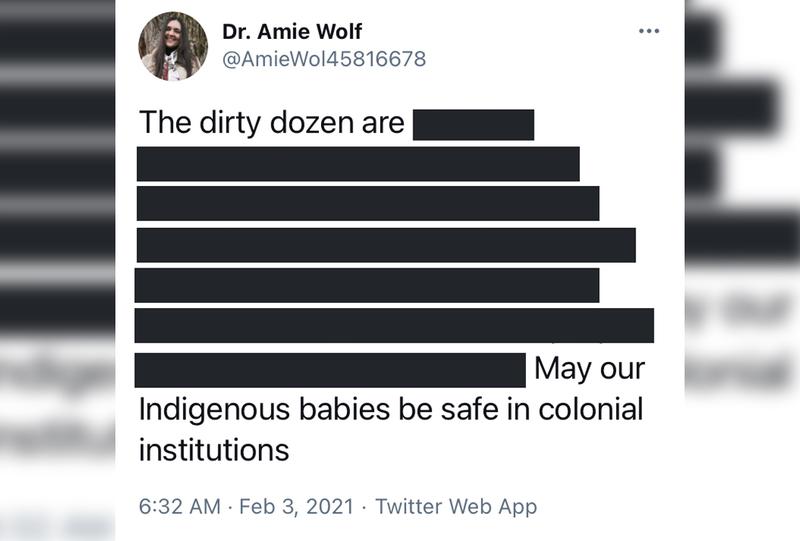 Editors’ note: The Ubyssey waited to report on this story until after the tweet had been removed to avoid drawing further attention to the tweet and to protect the privacy of those named.

Dr. Amie Wolf, an adjunct professor in the Faculty of Education who called UBC anti-Indigenous for allegedly destroying her interim reports of 12 students, deleted on Wednesday afternoon a tweet which appears to expose the names of those students.

In the tweet, posted Wednesday before dawn, Wolf called the students the “dirty dozen” and listed 12 names which she said were the subjects of the reports. “May our Indigenous babies be safe in colonial institutions,” the rest of the tweet read.

Wolf tweeted Wednesday afternoon that UBC had contacted her to delete the original post.

“I was threatened tonight by UBC — remove the post revealing names of racist teacher candidates or be acted upon,” she alleged. “It’s an ugly insane and old war. Their lip service is archaic. Change now!”

In an interview, Wolf said that she posted the tweet in order to keep the teacher candidates out of the classroom, as she believes they are unfit to be teachers, particularly teachers of Indigenous students.

A cease and desist letter obtained by The Ubyssey appears to show University Counsel Hubert Lai writing to Wolf that UBC falls under the provincial Freedom of Information and Protection of Privacy Act (FIPPA).

“As an employee of UBC, you are obliged to comply with FIPPA, and your deliberate disclosure of the names of your students in this tweet constitutes a serious violation of that law,” he wrote.

The Ubyssey has messaged social media profiles linked to two of the people named. Profiles for the ten others could not be found.

She said that as an Indigenous woman, she is the “one who is vulnerable, not the students, me.”

Two weeks ago, Wolf called for structural change after administrators in the Faculty of Education allegedly deleted interim reports she had written for the 12 students that were in her EDUC 440 class. Wolf claims this followed the President’s Office receiving an anonymous letter from a parent concerned about the ramifications of the report on their child’s career.

The university did not comment on whether this letter existed.

In one of the reports obtained by The Ubyssey, Wolf described the student as displaying an unwillingness to communicate in the class and characteristics of intolerance.

“At worst, it points to the possibility of unconscious and unacceptable biases, the reinforcement of white supremacy and/or Indigenous specific racism and misogyny,” Wolf wrote in the report.

Wolf has since said that she has been placed on paid administrative leave. The university declined to comment on Wolf’s employment status.