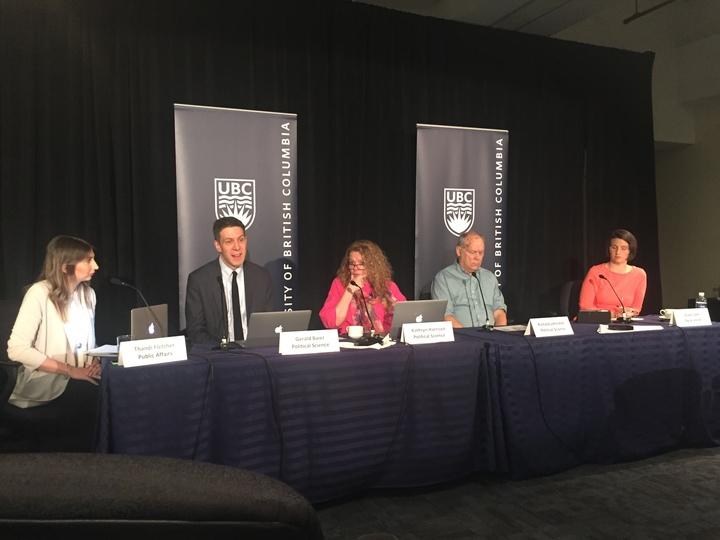 With the BC Liberals winning a minority government while shy from a majority by only one legislative seat, and with the Green Party doubling their popular vote and tripling their seat count from 2013, they had much to discuss.

Fuelled by questions from the audience, the panel had one overarching thought: until the absentee ballots are counted and the type of government that will form has solidified, BC politics is a waiting game.

The representation of women did not change, but probably not due to voter biases

Thirty-four women were elected to the BC legislature, which comes out to 39 per cent: to break it down further, that is 33 per cent for the BC Liberals, a decrease, and 46 per cent for the NDP, an increase.

“BC remains the province with the highest proportion of women elected, and there was a one percentage point increase, but this was a disappointing election in terms of women representation,” said Lore. Equal Voice is an organization dedicated to electing more women to all levels of political office in Canada.

The number of the women on the ballot increased, she noted, and there was a significant amount of diversity among those women, but those statistics were not mirrored in those elected.

“To be clear, there’s no evidence that people aren’t voting for women,” Lore said. She instead attributes the statistics to partisan alignment, coupled with the fact that women are more likely to be running in ridings where their parties lost by more than 10 per cent in the previous election — margins that are hard to come back from.

Said Lore, “what this election shows is that just getting on the ballot isn’t sufficient where women are running. It’s the kind of ridings that they’re in and how competitive those ridings are.”

The Courtenay-Comox riding, which was won by NDP candidate Ronna-Rae Leonard by only nine votes, could be the final legislative seat that the BC Liberals need for a majority government. That is because absentee ballots, once filed, have the power to sway numbers rather significantly.

The preliminary count of this year’s absentee ballots is 176,104, almost ten per cent of the total voter turnout. The final count will take place between May 22 and 24. After that, said Baier, if the margin between the first- and second-place candidates is still 0.2 per cent or less of the total vote in that riding, then a judicial recount would automatically take place.

Regardless of how the election turns out after final votes are counted, noted the professors, Clark should hit the pause button.

“I don’t think that [Clark] has any incentive to begin negotiation,” said Johnston, when asked whether he thinks Clark will now begin talks with the Greens. “It’s entirely possible that she will have a majority. Why would you create any sense that your tenure in office is illegitimate?”

Baier added that all candidates have made some form of a victory speech, further demonstrating the extreme uncertainty of the results so far.

The Green Party has some decisions to make

“Andrew Weaver [leader of the Green Party and the first Green MLA in the BC legislature] had better not overestimate his bargaining power,” said Johnston, noting that the Greens want another election least of all when they just secured some important additional seats.

Harrison added that it is likely that the Green voice in a coalition would be undercut almost immediately.

“I think the risks to any junior partner in a coalition ... are pretty great,” she said. “I think in practical terms, it’s hard for me to imagine what significant concessions the Greens would be able to get from the Liberals.”

She cited electoral reform — towards proportional representation, understandable for a small party — as an example of a Green priority that the Liberals would probably not agree to take up.

Further on during the panel, Johnston noted that it is easier to imagine an alliance between the NDP and the Greens due to the rather polarizing policy differences between the Greens and the BC Liberals.

“Weaver has to be very careful about how he plays this,” said Johnston. He said that to implement the changes that Weaver might want to, it could be necessary to side with the “loser.”

Supporting a party that got a lower share of the popular vote, added Harrison, could be seen as “propping up the losers.”

“I’m more interested in what the numbers are,” said Johnston when asked about whether he sees the youth opinion being given more credence in future BC politics. He is cautiously optimistic that the statistics of the last few elections could reflect that the “ship might be turning” for young engagement.

Lore noted two factors that she sees as key to unlocking the youth vote: the tools of the trade and representation. On the first, she noted that it seems like parties are getting better at tailoring their campaigning strategies to a younger demographic.

“I think that young people are going to do more voting and more participating the more politics starts to look like them,” said Lore on her second point. “As our legislature starts to look more diverse, I think that that makes a difference too: it starts to feel less isolated.”

To watch the panel in full, see our live-stream.

Correction: A previous version of this article stated that a judicial recount is triggered by a winning vote margin of less than 2 per cent of the total vote, not 0.2 per cent. The Ubyssey regrets this error.