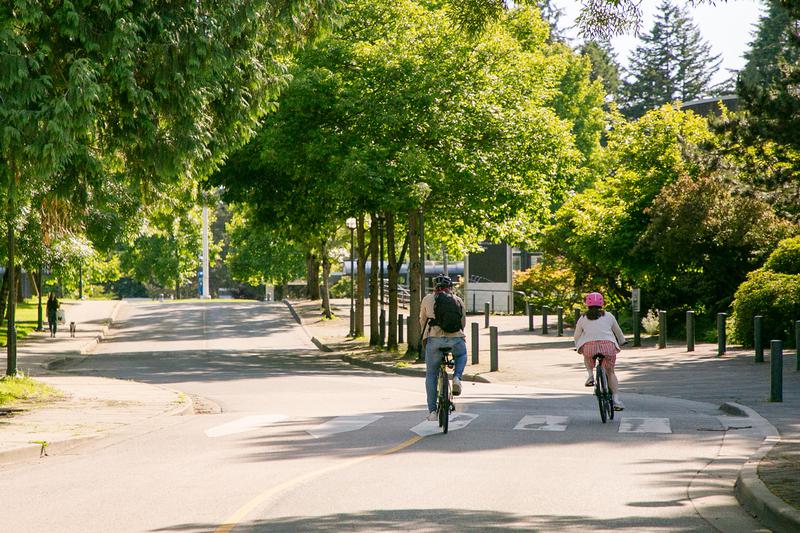 According to COVID-19 modelling, B.C.’s worst-case scenario around Omicron would be 2,000 new cases per day by December 29. Isabella Falsetti

As universities across the country have announced a move to online until mid-January or February, UBC is still in consultation with public health.

On Thursday, Queen’s University announced that exams would be moved online, and that the second term would begin online after a 300+ person outbreak on its campus. Meanwhile, the University of Toronto, which has not seen a significant outbreak, also announced a delay to in-person classes due to the threat of the Omicron variant.

As of December 17, no decision has been made yet at UBC about the second winter term.

“At this time the university is in consultation with Vancouver Coastal Health, Interior Health and the Provincial Health Office. We will continue to work closely with those agencies as we monitor and assess the situation to ensure our operations protect the health and safety of our communities,” Matthew Ramsey of UBC Media Relations wrote in a statement.

“Any decisions regarding the status of Winter Term 2 will be communicated broadly,” he added.

On December 13, the UBC Faculty Association (UBCFA) penned a letter to President Santa Ono asking him for an explanation of UBC’s “contingency plans” for term two, how courses will be delivered, the availability of rapid testing on campus and other health-related questions.

Dr. Alan Richardson, president of the UBCFA, noted the rise of the Omicron variant at UBC and recent exposures at UBC.

On December 10, Vancouver Coastal Health (VCH) sent a letter notifying students living in the Totem Park residence area of a COVID-19 exposure. In a broadcast message from December 14, Ono said the risk of transmission in Totem Park was low.

According to COVID-19 modelling, B.C.’s worst-case scenario with regard to Omicron would be 2,000 new cases per day by December 29. Currently, the province has recorded 135 cases of the variant. BC recorded 753 new cases of COVID-19 on Thursday.

“...even if Omicron is ‘mild' it is highly transmissible; thus, while BC hospitals and ICUs might be able to handle the strain, we should expect widespread absenteeism due to illness or exposure in UBC courses and other academic settings,” Richardson wrote. “This will be highly disruptive of the academic mission at UBC.”

In a response to Richardson on December 15, Ono said that UBC is working closely with VCH and Interior Health to monitor “the situation” and that there is currently “no reason to think” that courses won’t be delivered in person as planned.

“That said, there is much we don’t know about the trajectory of Omicron, and it is too early to speculate what the picture will look like on the 10th of January,” he added.

Ono said that faculty should plan to continue the “various approaches” they have used to support students who may be unable to attend classes in person.

The president added that current masking policies would remain in place, and that the university will begin offering PCR testing on the Vancouver campus for symptomatic community members in January, as announced last Friday.

“These measures will add a layer of protection and reassurance to our existing Rapid Testing Program against potential transmission of SARS-CoV-2, the virus that causes COVID-19,” Ono wrote.

In a response letter to Ono published around 3:45 p.m. Thursday afternoon, Richardson issued an advisory to faculty members.

“My own advice to you, for what it is worth, is to prepare for online delivery and in-person delivery. I am sorry that this means, yet again, a substantial increase in your workload—and at holiday time. But it seems the most prudent course of action,” he wrote.

Despite the lack of specifics in UBC’s statement, faculties across the university have started sharing bits of information about term two.

Forestry Dean Robert Kozak wrote in an email to faculty and staff on Friday, December 17 that “in all likelihood, teaching will be online in January, a least for a two- to three-week period. He wrote that while the details have not been worked out and this has not been confirmed, he is ”reasonably certain that this will happen.”

An email from the Robert H. Lee Student Experience Team of the Sauder School of Business told students they must be prepared to attend classes in person on January 10. The email urged students to cancel their international travel plans, as the program would not offer online classes unless UBC moved all classes online.

“Internal travel will increase your risk of contracting Omicron and spreading it to our community. Additionally, we cannot predict the impact on travel, it is possible, as we have seen previously, that travel bans and quarantines may return,” the email read.

A screenshot of the email — which was sent through Canvas — was posted to the UBC subreddit yesterday evening.

However, on December 18, Sauder transitioned all of its remaining exams online.

This article has been corrected. A previous version incorrectly stated that Forestry Dean Robert Kozack sent an email to students notifying them that teaching would likely take place for the first two- to three-weeks in January.