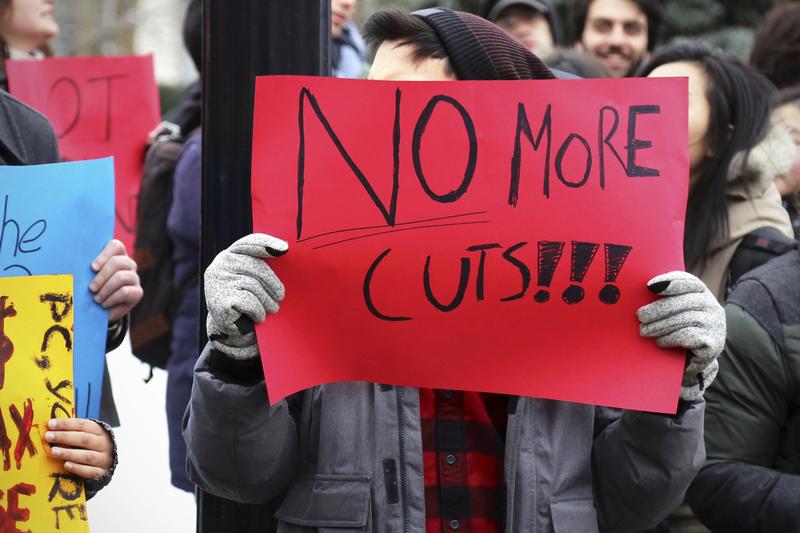 “My parents can't help me out because they don't make that much money.” Courtesy Shanna Hunter/The Varsity

Changes to the Ontario Student Assistance Program (OSAP) could leave almost 1,000 UBC students without funding as early as September.

The OSAP changes increase funding for low-income families, but the family income threshold for qualifying for funding will decrease from $175,000 a year to $140,000. Under the Liberal government, low-income students could qualify for grants large enough for “free tuition,” but the Ford government is changing the loan-to-grant ratio so that a minimum of 50 per cent of a student’s funding will now be loans.

The definition of an “independent student” has also been changed.

Previously, a student who had been out of high school for four years qualified as an independent, but now parental incomes will be factored into OSAP assessments for students up to six years out of high school.

Interest on student loans will also begin being charged right after graduation, ending a six-month grace period when loan payments were interest-free.

Paige Basner is a third-year biochemistry student from Innisville, Ontario, who says she’s unsure exactly how the changes will affect her. She worries that she may have to work full time in the summer instead of focusing on research and lab work, or increase her already 20-hour a week work schedule to make up the difference in her funding.

“It’s just very stressful, essentially, because they haven’t notified or given us the numbers yet,” said Basner. “All of us are just sitting here kind of terrified, not knowing where our futures’ going now with education.”

Basner says the 10 per cent cut in tuition that came with the OSAP cuts does little to help most students — especially Ontarians in other provinces who won’t be seeing any of tuition cuts. She also worries she'll see interest being collecting on their OSAP loans right after graduation, instead of after a six-month grace period.

“I was really looking forward to this grace period where I am able to go home, try to figure out my life and then proceed,” says Carol Park, a journalism student.

The end of the grace period means she has to worry about whether she’ll be able to find a job right after graduation to start paying off her loans and deal with other expenses.

The reduction of the family income threshold and the change of the definition of an independent student worry Park the most.

“My funding will go down because on paper, it looks like my parents can help me out,” she said. “My parents can't help me out because they don't make that much money.”

Without OSAP, Basner says she would wouldn’t have been able to attend UBC. Park says she was only was able to complete her undergraduate degree at the University of Toronto and then move out to Vancouver because of OSAP.

They say that OSAP is important for allowing students from low-income families to access quality education.

“[OSAP] just kind of grants students who have not been that privileged and don't have a stable economic background to experiment with what they want to do with their lives,” said Park.

The AMS recently joined with 74 other student unions from across Canada denouncing all the tuition changes, including the changes to OSAP.

“Students universally feel that this is a step backwards”, says the letter. “We urge this government to sit down with student associations to better understand how these changes will create a workforce less prepared and saddled with debt.”