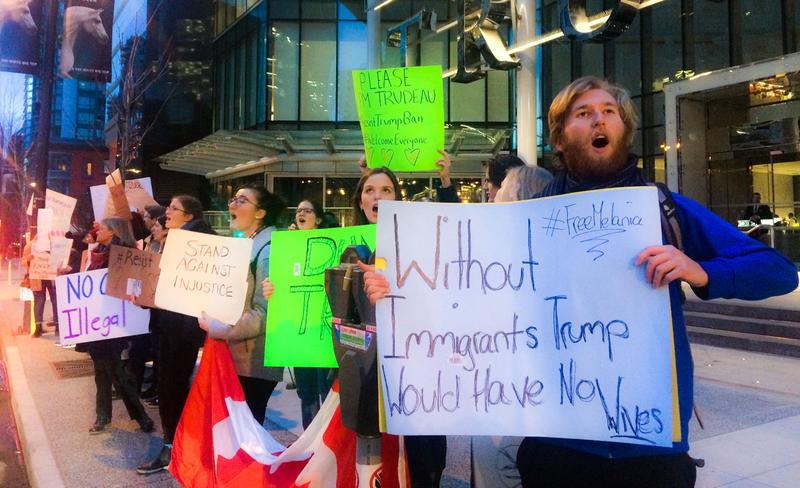 Dozens of protesters gathered outside of Trump International Hotel & Tower in downtown Vancouver yesterday to rally against US President Donald Trump’s most recent executive order to restrict immigration and travel into the United States.

Signed on Friday, the order initially prohibited the entry of any refugee into the US for 120 days, the entry of refugees from Syria until further notice, and the entry of any citizen of seven predominantly Muslim countries — Iraq, Iran, Syria, Somalia, Sudan, Libya and Yemen — in any visa class for 90 days, even those who are US green-card holders.

This morning, however, it was announced that people from affected countries who hold green cards will not be prevented from returning to the United States.

A handful of UBC students joined the protest to voice their concerns for the ban and its implications for Muslims both in the US and Canada.

“This doesn’t just affect Americans in America,” said Richa Sharma, a PhD candidate at UBC’s school of population and public health, at the rally on Saturday, January 28. “This hits a lot of Muslims in Canada as well ... my first thought was that if you’re Muslim and if you’re in transit, as many are, you are fucked right now. It doesn’t matter if you’re a refugee or if you have dual citizenship.”

Just hours after the ban was signed, Prime Minister Justin Trudeau announced via Twitter that Canadian passport-holders and dual citizens from the aforementioned countries would not be impacted after consulting with President Trump’s National Security Adviser Michael Flynn.

Despite this exemption for Canadian passport-holders, UBC students at the rally remained concerned for the “precedent of hate” that this decision could set for both sides of the border.

“The executive order to stop refugees coming over from Syria, Libya, all these places that they most need to escape [is] heartbreaking,” said Flynn Dixon Murdock, a third-year civil engineering student at UBC. “There is no longer a trust that our neighbours to the south are going to be able to keep their shit together enough that the world can keep progressing forwards and not backwards.”

In response to the travel ban, the UBC Social Justice Centre is organizing a similar protest outside of the US consulate in Vancouver to take place on February 5. Sharma hopes that Saturday’s protest will help spark even further action among Canadian students.

“Trudeau has made his pretty little tweet … but he needs to have a stronger stance and I want Canadian politicians to speak up,” said Sharma. “As students, we need to mobilize [and] we need to be aware. Call your MPs and let your politicians know that you expect them to stand up for democracy.”

Dixon Murdock also stressed the importance of solidarity as students at “an amazing and multi-ethnic institution” like UBC during a time when many international and domestic students alike may be negatively impacted.

“Coming out here [to the rally], it’s about standing up and showing that no, we’re not going to be calm and silent as people get spit on,” said Dixon Murdock. “We can’t let people get this idea that they’re isolated and alone.”