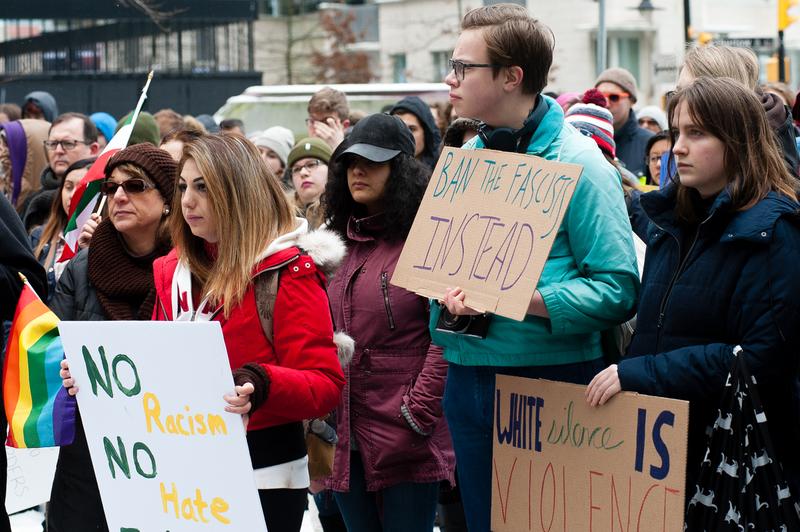 On Sunday, a large crowd gathered in downtown Vancouver’s Portal Park to demonstrate their support for communities affected by the recent United States travel ban and the mosque shooting in Quebec. As stated in a handout given to attendees, the protest also stood in solidarity with the demands outlined by Black Lives Matter Toronto and coincided with the National Day of Action against Islamophobia and White Supremacy.

Organized by the UBC Social Justice Centre, the protest featured a diverse range of speakers of Muslim, Indigenous and black backgrounds from both UBC and the wider Vancouver community. Speakers performed speeches, poems and rap songs that addressed issues ranging from Islamophobia, to Indigenous rights, to the racial violence perpetrated against people of colour through police brutality.

Speakers condemned the silence around previous US administrations’ acts of violence.

“I’m here to charge all of you who raised your fist at Trump’s oppression, but cheered on as Obama’s drones murdered my people and hoorah'd when Hillary pushed for military interventions in Iraq, Syria and Libya,” said Ismail Askin, a speaker and third-year arts student at UBC.

Ultimately, they spoke of hope for a more just society that could be brought about by “a committed fight for justice and inclusivity.”

“The immense support from people of so many communities and backgrounds warmed my heart,” said Sofiya Soufi, a speaker and second-year arts student at UBC. “It proves that as a global community, we will not be divided and that we are stronger than fear. We are all here to show that we will not be passive observers to tyranny, but we will be active advocates for global justice and democracy.”

JB: "We welcome refugees. Us as indigenous people know what you are going through. We stand on stolen Native lands and people forget that." pic.twitter.com/bilUEmBWw8

The crowd maintained its energy and high spirit despite the cold, with students being among the most vocal.

“A large portion of the crowd and the organizers here [at the rally] are from UBC, and I think that really speaks to what we stand for as a community,” said Madison Schulte, a second-year commerce student at UBC.

Students not from UBC were also present to voice their support and encourage others to act. One of them was Andrew Latimer, a fourth-year archaeology student from SFU who also attended last week’s protest outside of Vancouver’s Trump Tower.

“[SFU has] issued statements, but it doesn’t really matter if the students aren’t out there acting and making a difference,” said Latimer. “It depends on what you’re comfortable with ... but any sign of solidarity helps. Whatever you can do is enough.”

Many attendees also commented on the opportunity Canadians have to demand better leadership and act themselves to counter Islamophobia and xenophobia.

“[Our diverse nation] puts us at the forefront of people who can speak and say that ... there is no need to be afraid of someone because they’re different from you,” said Soufi. “Our role as Canadians is even more important on the world stage because we are a prime example of a society where multiculturalism is a strength.”

Since the executive order’s signing, UBC has responded by establishing “a task force with a $250,000 budget to support scholars-at-risk” and by hosting a packed “learn-in” panel on the ban itself. Additionally, in light of the recent mosque shooting in Quebec, UBC students hosted a vigil for the victims, and both the AMS and GSS have condemned the ban and the shooting.

Students from the Allard School of Law also recently participated in a “research-a-thon” as part of a national effort to “examine the Safe Third Country Agreement between the United States and Canada,” a lesser-known policy that now poses risks for certain people claiming refugee status as a result of the travel ban.

According to the speakers and protest organizers, there are still many different ways to contribute to the collective fight against the ban and other exclusionary policies.

“I’m asking you not just come to rallies, but join clubs, join groups, join parties, join unions, join organizations,” said Askin. “Organize, strike and let your voices be heard. Now is the time to work to your limits because if not now, then when?”

It's a family affair! #NoBanNoWall pic.twitter.com/yxeMwjTuPu

Moving forward, organizers hope that demonstrations like these will serve to create an awareness among Canadians of the ways that they can advocate for justice.

“I think carrying on advocating for the mandates that we were provided with by Black Lives Matter Toronto is going to be key,” said Mahtab Laghaei, one of the organizers and a second year-arts student. “There are going to be more protests, but more importantly, [there are going to be] dialogues with [elected officials and community members] and through platforms like The Talon.”

“In the end, it’s important to realize that the concept of forgetting is a privilege,” said Tania Talebzadeh, a third-year arts student who also helped to organize the event. “The centre of our action is to remember that this is not something you [read] in a textbook. It’s not in the past — it’s ongoing and it’s violent.”