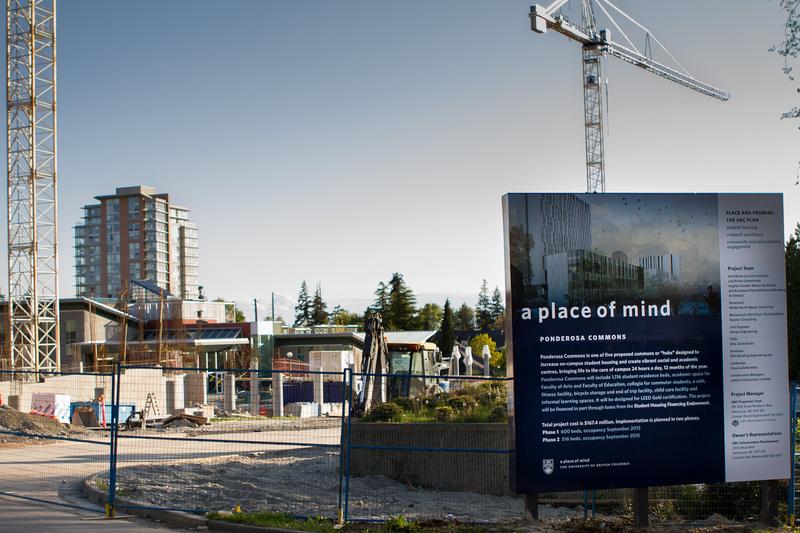 A GBE would act as a separate entity from the university. File Kai Jacobson

UBC is working to establish a separate trust that will ideally let the university invest hugely in student housing without the caps of provincial borrowing. After working for years to come up with alternative funding solutions without real success, this may finally allow the university to fund an accelerated construction of student residences.

In a presentation Friday, UBC Board of Governors’s finance committee heard about the potential creation of a government business enterprise (GBE), which those working on the project hope will be a comprehensive solution to the student housing standstill. A GBE would act as a separate entity from the university, selling goods and services — like housing and food — outside of the “government reporting entity” that UBC is a part of while maintaining its operations from its own revenue. UBC would be the beneficiary of this trust.

The beginning stages of the project have been headed up by interim VP Finance & Operations Peter Smailes and Managing Director of Student Housing and Hospitality Services (SHHS) Andrew Parr.

“We’re looking for something that will allow us to expand student housing over the long term,” said Parr.

Despite the addition of 3,500 beds over the last seven years at a cost of $500 million, the student housing waitlist is currently at 6,200 spots — and constantly growing. UBC is the largest student housing provider in Canada, but has the largest gap between available beds and demand.

If this new strategy is successful, SHHS hopes to increase the number of beds across both campuses by approximately 6,300 (including approved projects) in the next 10 years, resulting in a total of approximately 20,000 beds by 2028. The GBE would also be used to fund its own set of food and conference services.

After the provincial government’s moratorium on borrowing by universities, UBC looked for other solutions — including borrowing directly from third-party lenders and public-private partnerships — without any success. Currently UBC is borrowing from its own Endowment Fund, which Parr dubs a smart but short-term solution given that the university needs to pay back that money back at a premium. The latest $450 million Provincial Student Housing Initiative is also insufficient to help accelerate the growth plans of UBC student housing while still funding other BC universities and colleges.

According to Parr, the GBE is not only the best financial option for UBC — the presentation dubbed it the “one long-term practical solution” — but also aims to preserve student interest at its core. He cited the social and educational benefits of living on campus for students during his presentation, and flagged students choosing not to come to UBC because of housing struggles as a large university concern.

UBC consulted with student representatives, including those within the AMS and the Board, to come up with this option. Board of Governors student member Kevin Doering voiced his “overwhelming support for this project” during the meeting.

“I’ve had the opportunity over the last year to look at this develop, and I think my belief in the need for it has only grown,” said Doering.

“Students, staff, faculty are all able to advance their priorities through this set-up.”

If the GBE were to go ahead, Parr said, it will have its own staffing and board of directors appointed by UBC. Two of those seats would be reserved for students, he said, with one from the Vancouver campus and one from the Okanagan campus.

UBC has said additional work is required to determine if a GBE is feasible, such as continuing to examine tax implications, seeking government permission to establish the GBE and seeking credit rating agency support.

“There are a number of fairly significant moving parts that would have to be resolved,” said Parr.

But the university is hopeful that this could be the solution to the student housing crisis, and expects to bring a finalized proposal of the project to the Board, if successful, as soon as April 2019.