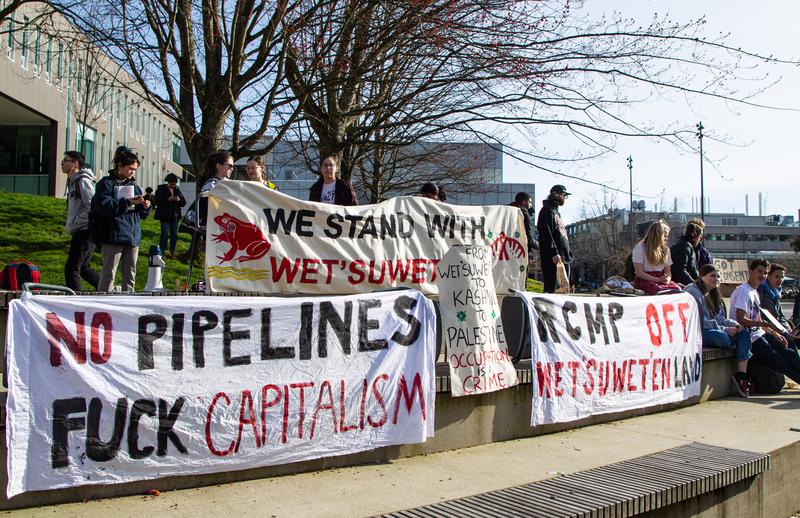 UBC student organizers joined in a National Student Walk Out on Wednesday in solidarity with Wet’suwet’en land defenders.

The UBC demonstration was one of many at post-secondary schools across the country including Langara College, Western University and the University of Toronto, among others.

The walkout was organized in solidarity with Wet’suwet’en hereditary chiefs and supporters who are reoccupying their traditional territory and aiming to block construction of the Coastal GasLink pipeline.

“Despite misleading media that the RCMP has offered to "withdraw" or stand down, the RCMP is still present on sovereign Wet'suwet'en territory. They continue to increase harassment and surveillance of the camps. The demands of the hereditary chiefs have not been met,” reads the UBC event description.

“Our academic institutions are complicit in this violent violation of Wet'suwet'en sovereignty. UBC has declined to make a statement, and maintain Foundation and pension investments in TC Energy and the Coastal GasLink Pipeline.”

Recently, federal government ministers and Wet'suwet'en hereditary chiefs reached a tentative agreement after days of discussions. But, the nation still has to approve the agreement.

Demonstrators gathered outside of the Nest for the UBC event. Elizabeth Wang

The UBC walkout started off with a large gathering in front of the Nest, where speakers led chants and spoke to the crowd about the importance of respecting Indigenous sovereignty.

“Water is life. Water is sacred. Stop the pipeline. Stop the hatred.”

Musqueam speaker Audrey Siegl expressed the importance of the event in her speech.

“We are here to stand in solidarity with the Wet’suwet’en. We are here to raise awareness of what’s happening, not with just the RCMP, but with the systems in place that empowered and created the RCMP. They need to back down,” said Siegl.

“What I’m interested in and what I’m working towards is options that serve all. That the dollar-based bottom line can be met, the land can be cared for, jobs and communities.”

Indigenous and Two-Spirit speaker Arial Eatherton shared a story to the crowd of how one of their relatives went missing and was later found dead. According to the final report from the National Inquiry into Missing and Murdered Indigenous Women and Girls, “Indigenous women and girls are 12 times more likely to be murdered or missing than any other women in Canada.”

“This isn’t a problem that affects me,” said Eatherton, “This is a problem that is going to affect my children when they ask me where their aunty went.”

The event was focused on the intersectionality of social justice movements, such as movements for climate justice, animal rights, racial justice and Transgender rights. The event also focused on centralizing Indigenous voices, speakers and performers.

Action on the streets

After the rally, the organizers blockaded the entrance to the bus loop at the intersection of University Boulevard and Wesbrook Mall. All sides of the intersection were blocked with large banners, one saying, ‘RCMP off Wet’suwet’en Land.’

As traffic built up, protestors stood their ground and began to chant. Indigenous demonstrators led the crowd, steadily pounding their drums, singing and leading line dances that circled around the intersection. Busses heading to campus were quickly rerouted.

In a statement to The Ubyssey Senior Director of UBC Media Relations Kurt Heinrich said the university respects the right of student organizers to hold demonstrations.

“We respect the right of all members of the community to advocate for views they support in a peaceful and respectful manner. The decision to attend classes, or not, is ultimately that of the individual student,” reads the statement.

Due to marches at UBC, Langara and SFU some buses are experiencing delays. Check alerts for specific information for detours or delays.

Yukiko Takahashi-Lai, a third-year student participating in the blockade, said that while being a non-Indigenous person moving on unceded territory, it’s “important to show that we are in solidarity with Wet’suwet’en.”

“We reap the benefits of this community and government despite the fact that we did not form it,” Takahashi-Lai said, “I think it’s important to take that power back and give it to the people it belongs to.”

Kwiis Hamilton, a first-year arts student from Native Education College Vancouver, was one of the Indigenous protestors that led the drumming sessions at the demonstration. Hamilton was happy that the event was very “focused and forthright” on the Wet’suwet’en issue.

“I think when political actions happen, they tend to lose sight of what’s going on,” said Hamilton.

“Everything everybody today said was completely valid. I’m very happy this event is happening because the more solidarity, the better. It comes down to human rights and Indigenous rights across Canada.”

In discussing the importance of the Wet’suwet’en issue to UBC, Hamilton added that right now, “it occupies Musqueam land.”

“It’s important to remember that everyone here is still a guest to the Musqueam Nation.”

Another point of this protest was to send a message to the federal government. Halfway through the blockade, an organizer read out the personal phone number of John Horgan and encouraged everyone to send a text message or leave a voicemail expressing their support of the Wet’suwet’en hereditary chiefs and opposition of the pipeline. Students embraced this opportunity and voices around the intersection can be heard dropping quick and solemn voicemails.

At around 7:45 p.m. the demonstration cleared away and busses were sent back to their original routes.

This article has been updated to correct a misspelling.

This article has been updated to include a statement from UBC and to add recent updates on negotiations between government officials and the hereditary chiefs.