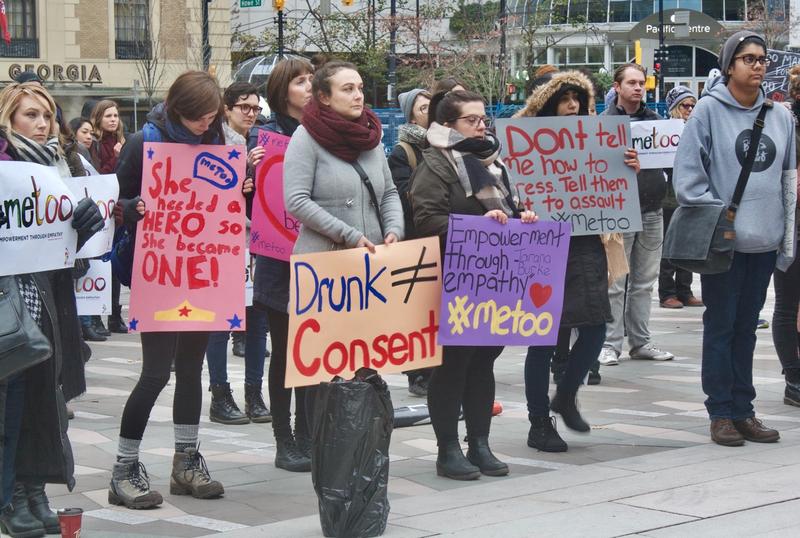 “It’s important to acknowledge that this is not new news, this is not a new hashtag.” Ryan Patrick Jones

On Saturday, the #MeToo movement vaulted from the feeds of social media users to the streets of Vancouver as people continued to speak out about their experiences with sexual assault.

UBC students and alumni were among the hundred or so people who braved snow flurries and subzero temperatures to rally outside the Vancouver Art Gallery.

“I know many people that have experienced sexual assault, so I think it is an important cause to be rallying for,” said Sophia Stevenson, a biology and chemistry student at UBC. “It’s important for the UBC community to know that this occurs and that it’s not okay.”

Organized by the Vancouver chapter of March On Canada, it featured a performance by the Vancouver Youth Choir and a variety of speakers — most of whom are survivors of sexual assault. Altogether, they sought to build momentum for an issue that has garnered global attention recently on social media and take that issue beyond the realm of the internet.

“The hashtag #MeToo, like any hashtag, is just a moment in time,” said Jodie Ortega, co-organizer and host of the rally. “A movement actually moves and the dialogue actually goes somewhere beyond the realm of Facebook.”

A major theme of the event was that sexual assault does not discriminate — it affects people of all ages, races and genders.

This perspective was reflected in the diversity of the speaker list, which included Judi Lewinson of Black Voices Vancouver; Crystal Smith, an Indigenous writer; Hailey Heartless, a trans-feminist and activist for the rights of sex workers; Nicholas Harrison, a teacher and UBC alum; and third-year Indigenous studies student Winona Williams, amongst others. All shared their experiences as survivors.

“Many of us gathered here today are the survivors,” Lewison said. “Ours is the heartbreaking tapestry of sexual harassment and other violations far too horrific to politely recall.”

“We all know someone, or have been ourselves, affected by sexual or racial or other abuse,” said Harrison, while speaking about being a child victim of sexual abuse perpetrated by Catholic priests in a small northern BC town where he grew up.

“That’s what brought me here, to bring a male voice. It’s not just one sex, one gender, one type of race. It’s all races, all people, all ages — it’s everyone.”

As part of the healing process, Harrison has since written a play called How Star Wars Saved My Life, which was inspired by his struggle with the guilt and shame that a lot of survivors carry with them and how he overcame it.

Organizers, participants and attendees also agreed that the power of the #MeToo movement is in the conversations it sparks, but that the responsibility should not be solely placed on survivors.

“You showed up today, and that’s the first step,” said Smith to the men in the crowd. “But what needs to happen is that you start standing up for women — you need to start walking beside them.”

“We have to keep this conversation moving to the point where these conversations about sexual violence are so normalized that we don’t need a rally to get people talking,” said Ortega.

The idea for #MeToo came from Tarana Burke — an activist from Philadelphia who in 2006 founded Just Be Inc., a nonprofit that helps women who have experienced sexual abuse, assault and exploitation. However, the phrase only garnered global attention last month in the wake of allegations against Hollywood producer Harvey Weinstein, when actress Alyssa Milano tweeted out the hashtag as a call-to-action and it went viral.

Some at the Vancouver rally criticized the disparity in responses to the voices of women of colour and those of white women. They pointed out that the efforts of women of colour, like Burke, have been largely ignored. Meanwhile, the issue entered the mainstream only after a flurry of accusations from white women.

“People of colour have been saying these things for decades and only now are we taking action,” said Smith. “It’s important to acknowledge that this is not new news, this is not a new hashtag.” 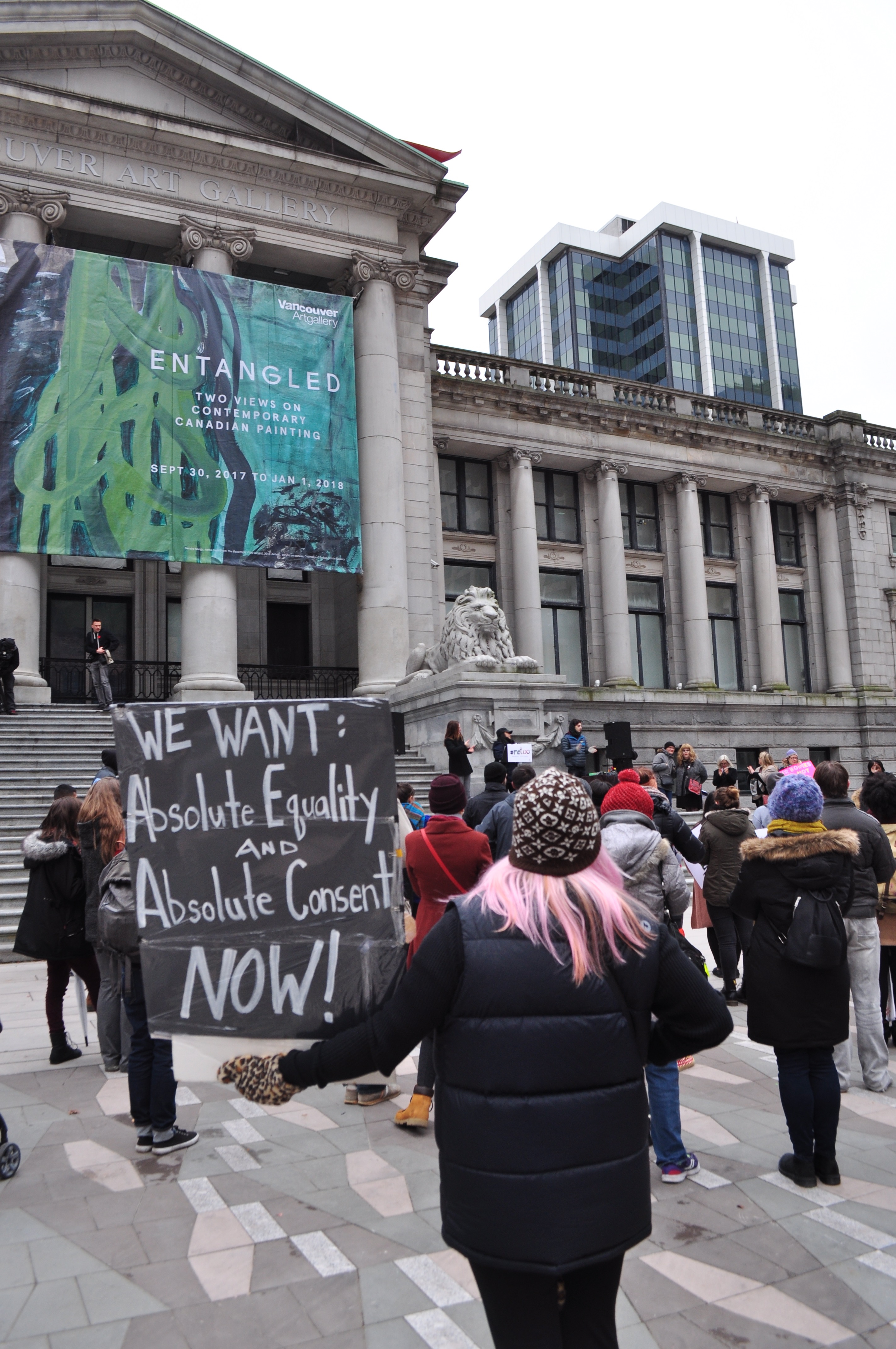 There remains a disparity in response to the voices of women of colour and those of white women. Aidan Tong

“Sadly, I think there is a connection that 10 years ago a woman of colour started this movement and no one paid attention to it,” she said. “I do think a big part of this is that it’s a white actress that is popular that started this [new resurgence].”

This is a reflection of systemic issues such as structural racism, according to Dr. Jennifer Berdahl, a UBC professor who has been studying sexual harassment for over 20 years.

“White power and privilege are always going to give white voices and experiences more weight in our culture than those of racialized people,” said Berdahl. “And so, the sad fact in our culture is that white women have a lot more power, and are considered a lot more believable than women of colour.”

A work in progress

Closer to home, UBC has had a checkered history when it comes to dealing with sexual assault.

Until this year, sexual misconduct complaints were dealt with under a generic policy for “non-academic discrimination,” the same one used for vandalism and theft. In 2015, a CBC investigation revealed major flaws in the process of reporting and investigating sexual assaults.

After the provincial government mandated in April 2016 that all post-secondary institutions have a standalone policy for dealing with sexual misconduct, UBC has finally developed and put into effect Policy 131 — a specific policy on sexual assault and sexual misconduct.

Under this policy, the university has created new procedures for handling sexual assault allegations, a wide range of personal supports and a Sexual Violence Prevention and Response Office on both UBC campuses, which is a centralized office for reporting and investigating allegations of sexual assault. According to UBC, the Vancouver office has been fully operational since mid-October, but the timeline remains as vague as “later this year” for the Okanagan office.

Overall, while Policy 131 has already been in place for over six months, it remains to be seen if the policy will be enough to improve the reporting process and support for sexual assault survivors.