'Vote like your lives depend on it': Vancouver Quadra candidates clash on pandemic recovery at AMS-organized debate 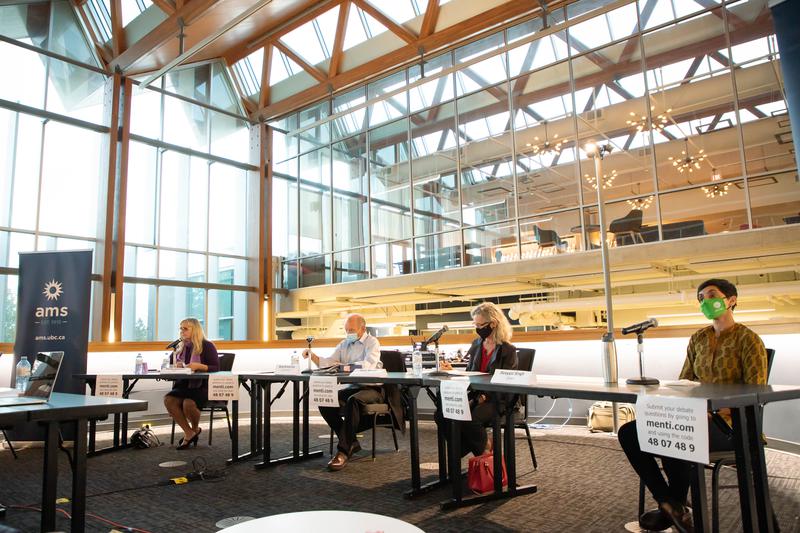 On September 8, candidates from the Vancouver Quadra riding clashed on topics ranging from climate change and Canada’s post-COVID-19 economic recovery to addressing the housing crisis at a debate organized by the AMS and the Graduate Student Society.

The evening’s debate was mostly civil, but was punctuated by members of the audience — mostly those who appeared to support the People’s Party of Canada (PPC) candidate — occasionally clapping loudly, hollering or engaging in intense exchanges with other audience members.

Four out of the five invited party candidates attended the debate: Brad Armstrong from the Conservative Party, incumbent Joyce Murray from the Liberal Party, Dr. Devyani Singh from the Green Party and Renate Siekmann from the PPC. The New Democratic Party candidate, Naden Abenes, was absent.

One area of contention was concern over Canada’s economic recovery, particularly the role of public spending and the accruing of federal debt. Armstrong, Murray and Singh were all in general support of pandemic spending in order to fuel economic recovery. On the other hand, Siekmann expressed a deep concern for the amount of debt the federal government has taken on.

Throughout the night, Siekmann reiterated her preference for smaller government and reduced spending measures. “There is no such thing as a free lunch,” she said multiple times.

It was clear that the approaches presented by each candidate for Canada’s economic recovery were vastly different.

Siekmann pushed for an ending of all pandemic-related restrictions in order to “get back to [an old] normal.” Murray pushed for continued economic support and an expansion of the safety net with promises like ten-dollar-aday childcare. Armstrong promised a balancing of the budget within ten years and promised to increase affordability through tax incentives. Singh argued in favour of a green recovery, promising policies such as a guaranteed minimum income and a large increase in non-profit housing.

While the recovery plans discussed had key differences, some areas of agreement were acknowledged.

Climate was one of the winners of the debate, with all candidates agreeing on the severity of the climate crisis. Murray and Armstrong battled over differing emissions targets — with Murray targeting a 45 per cent emissions reduction by 2030 and Armstrong, a 30 per cent reduction. Siekmann spoke on ending the carbon tax and reducing shipping emissions through local manufacturing.

Singh proposed the most aggressive action. She said the Green Party would target a 60 per cent emissions reduction by 2030, end fossil fuel subsidies and ban the construction of new fossil fuel infrastructure past 2023.

Siekmann did not mention any specific policies to address access to mental health services, but suggested that mental health would be improved through the ending of all pandemic-related restrictions.

On housing affordability, Singh, Murray and Armstrong proposed policies to address the crisis, while Siekmann criticized the government’s spending as a reason for rising rental and housing prices. Armstrong proposed a marketbased solution to the crisis through incentivizing developers to expand supply.

In contrast, Murray and Singh proposed more intervention-based solutions. Murray proposed increased investments in building homes for people with “modest incomes” while Singh stated that housing should not be a for-profit venture.

The debate flared on the topic of vaccine mandates and vaccine passports. Tensions in the audience and between candidates ran high with Siekmann diametrically opposing the general sentiment from the other candidates on the importance of encouraging vaccinations to end the global health emergency.

Siekmann, while responding to a question on abortion access, pivoted and targeted vaccine mandates saying, “It’s your body, your choice.”

In the closing statements, climate was again highlighted as a top concern among the Liberal, Conservative and Green candidate’s platforms — with Singh saying “nothing else matters.” In contrast, Siekmann appealed to voters as the alternative to the mainstream parties and casted the party as a bulwark against a perceived loss of rights and freedoms. All candidates were in broad agreement on the critical nature of this year’s federal election.

“Vote like your lives depend on it,” Singh said. “Because frankly they do.”