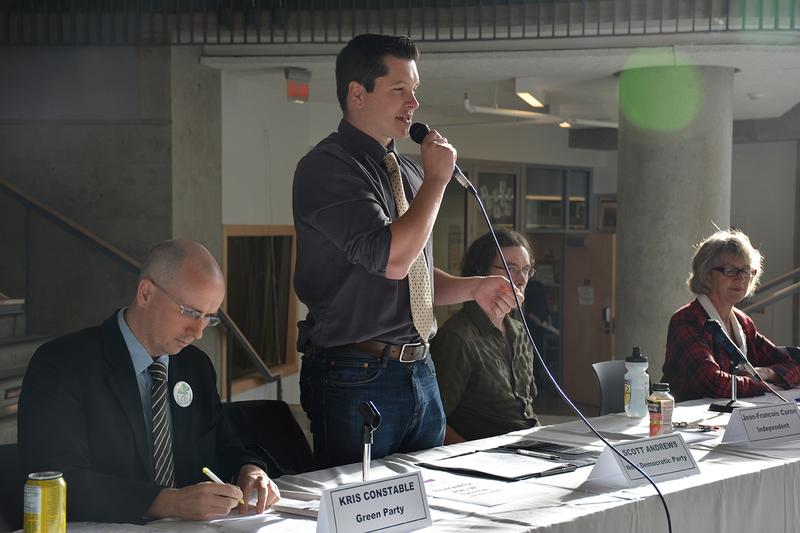 The forum included Kris Constable of the Green Party, Scott Andrews of NDP, Joyce Murray of the Liberals and Jean-Francois Caron, an Independent candidate. Photo Helen Zhou / The Ubyssey

The forum included Kris Constable of the Green Party, Scott Andrews of the NDP, Joyce Murray of the Liberals and Jean-Francois Caron as an Independent candidate.

Blair Lockhart, candidate from the Conservative party, declined to attend. Lockhart also was also not present at the on-campus “Candidates on Climate” debate.

"This event in particular is nice because the AMS is trying to bring politics to the students," said Akshiv Bunsal, a student at the event. "It shouldn't be as hard as it is to find credible information and hearing it straight from the candidates is probably the best way to go."

He also proposed a $1 billion injection into the green tech field.

"We believe that clean tech and green tech are just two of the areas that we should be focusing on to move ourselves to renewable resources," he said. "Any aspiring entrepreneurs [should] start thinking about what kind of future can we build and together. We can start to leverage the beautiful think tanks we have here."

Meanwhile, Murray talked about the Liberal Party's "focus on young people," promising $1.3 billion over three years to invest in co-op and increasing jobs with a youth employment strategy.

Murray also mentioned the barriers that aboriginal youth face in pursuit of a post-secondary education. According to Murray, the Liberals are committed to spending $2.6 billion on "bridging the gap" to help First Nations youth graduate high school.

"In B.C., there are more aboriginal people that go to jail than graduate high school on reserves," she said. "It is a tragedy of lost opportunity and lost fairness."

Andrews believes that problems surrounding opportunity and affordability prevent millennials from starting families and settling into careers. He said that the NDP platform would provide long-term solutions to these problems, including apprenticeship programs, reinstating research funding and a $15-per-day childcare plan.

"The NDP is committed to making life more affordable for Canadians, making sure we have a firm partner in Ottawa so we can get back on track and making sure that post-secondary education is an option for everyone in Canada — regardless of where you live," said Andrews.

Caron suggested a more radical reform in the way society views university education. "We shouldn't have to have post-secondary education to have a society function or to have an economy work," he said, noting that while lowering financial barriers is important, people should not be expected to have a diploma for the sake of job training.

Aaron Lao, another student in the audience, felt that the questions were too broad and had hoped for more opportunities for the audience to ask questions.

"You can poke at the specifics of each party. I just think it wasn't a hard-hitting line of questioning," said Lao.

Bunsal also believes that engaging students in politics is important and said that the event allowed him to hear the candidates speak as well as become fully confident in deciding who to vote for.

"It showed me ... what their positions are on issues I really care about," he said.