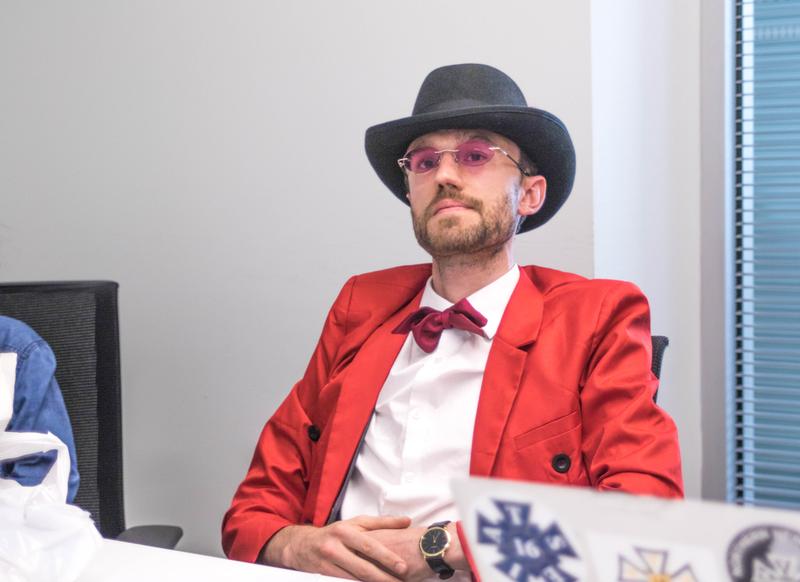 Fourth-year philosophy major Franz Kurtzke is running for VP Academic and University Affairs (VPAUA) on a platform of free speech and social justice reform — largely the same topics included in his lettering campaign, for which he gained a bit of notoriety after entering locked campus residences without permission.

Kurtzke’s platform is three-pronged: he wants to improve “viewpoint diversity” at UBC so students “learn how to debate”; promote “comprehensive research-based dialogue” on rape culture and sexual assault; and introduce “antifragile” mental health policies — he likes safe spaces, but not trigger warnings.

The most important issue he’ll face in office, Kurtzke said, is opening up dialogue. He wants to find people who are self-censoring conservative viewpoints and make them feel free to speak, as Kurtzke said he feels “unsafe” as a white man enrolling in GRSJ classes.

During the debate, he said getting UBC to adopt the Chicago Principles — a commitment to free speech made by the University of Chicago and other institutions — would be a top priority, but a “totally long shot.”

Kurtzke also wants to improve the waitlist for psychiatry; cut down on classes with “To Be Announced” professors during registration; improve TeachEval and CoursEval; remove the requirement from housing contracts for medical cannabis users to register with Student Housing and Hospitality Services prior to possessing cannabis in residence; and increase course content on psychedelic medicine. 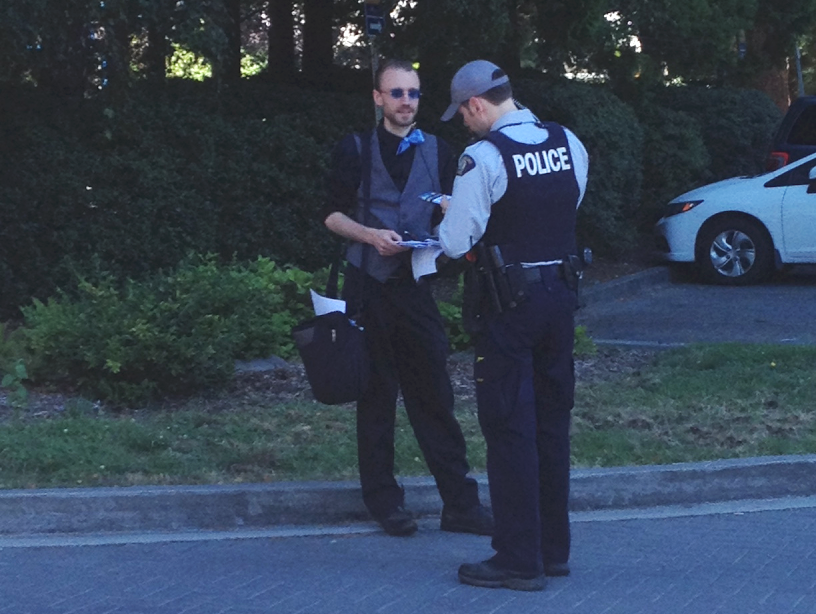 Kurtzke gets a warning from the RCMP after entering and distributing letters in a locked campus residence without permission. File Gil Henriques

Kurtzke has been asked multiple times by The Ubyssey where free speech is being impeded at UBC and has either refused to answer the question or mentioned an incident in which he said he was “bullied” by female Ubyssey staff for pitching an article arguing against rape culture — as previously mentioned in his various lettering campaigns.

At the debate, he also gave an anecdote about getting negative reactions after speaking up about men’s lack of reproductive rights in PSYC 350, a class of human sexuality.

Otherwise, he said that self-censorship is rampant. He also said many professors agree with him, but did not disclose any names.

While Kurtzke’s narrow platform could conceivably be accomplished under the VPAUA’s portfolio, he refused to make any commitments during the debate about what students would actually see from him by the end of the year, and was upfront about his lack of knowledge regarding the position and its responsibilities.

“I didn’t know that this position existed until a week, or less, ago,” he said in his campaign video.

On Reddit, he wrote, “the goal here is to put me in a position to be able to have significant impact on things, from the inside, to promote free speech, and reform of the social justice movement.”

During the debate, Kurtzke either could not speak on or admitted he didn’t know anything about every specific VPAUA responsibility mentioned, including the Academic Experience Survey, UBC’s Excellence Fund, UBC’s policy on sexual assault, or anything the VPAUA office has accomplished during his UBC career.

“I can honestly say that I’m not aware of any impact, positive or negative, the VP Academic office has had on my life,” he said, adding that that might be because the AMS isn’t advertising their services properly — something his opponent, Max Holmes, agreed with.

Kurtzke doesn’t have anything in his platform about housing, equity, affordability or liaising with the administration, which are traditionally major priorities of the VPAUA.

“I think they are implied,” he said during the debate, noting that he thinks he should focus on specific priorities in order to get things done.

Regarding equity, Kurtzke said, “I think we need to focus on inclusivity, but some of it, it’s a bit too much,” and that “some of this hyper-political stuff is actually making the situation worse.”

When asked to name the most important group he’d work with during his term, Kurtzke responded with the administrators, specifically Senior Advisor to the Provosts on Academic Freedom Neil Guppy and President Santa Ono. He said he doesn’t think that VPAUA has met with administration recently, which is false.

After multiple questions about topics Kurtzke seemed to have little to no grasp on, he took a chance to rebut one of Holmes’s answers to state that he felt “ambushed” and didn’t “like the direction this was going,” mentioning unspecified “ethical concerns” in the room.

Kurtzke declined to be interviewed for this article, first stating that he was “too tired and busy,” then after the debate that the author seemed “incorrigibly shady.”

“When I take office, I’ll be in precisely the same position as all previous candidates. Everyone has to start somewhere,” said Kurtzke. “And that’s where I’ll start — with the beginning.”