We fact-checked everything your AMS VP Administration candidates said 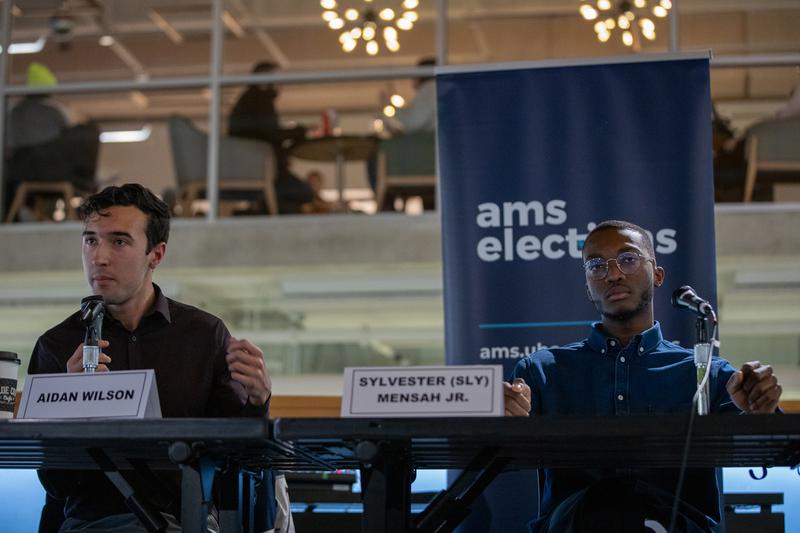 Here are our deep dives into some of your VP admin candidates more questionable claims. Zubair Hirji

Here are our deep dives into some of your VP admin candidates’ more questionable claims.

Aidan Wilson: “The [room] bookings process is slow, opaque and faced certain issues this year, such as double-bookings or the inability to implement club priority bookings”

True: When the Clubhouse was operational, the AMS was aware of students reporting issues concerning room bookings and filing forms. The AMS is currently accepting room bookings through its own website.

Misleading: Although it may take a while, the Operations Committee, which has decided matters of expulsion in the past, publishes its meeting minutes and agendas online. Rationales and outcomes are discussed at these meetings.

Wilson: “… Major funding projects or renovations [and] Changes of code or policy related to the Administration office.”

Misleading: The Operations Committee publishes monthly reports that outline its plans. It also publishes code changes. These reports are then submitted to Council.

Mensah: “Increasing the relevance of the Hatch on campus by launching a yearly student month and opening up space for event bookings.”

Misleading: According to the Hatch Art Gallery Facebook page, it hosts “biweekly exhibitions of student and local art.” Many recent Hatch exhibitions have displayed student art, which brings into question the purpose of a student month.

Sylvester Mensah: “IFC [Interfraternity Council] violated numerous AMS rules and were banned as an AMS Club. They’ve signed an MoU (Memorandum of Understanding) as to what their relationship would look like”

Misleading: After the AMS Council concluded that the IFC violated multiple AMS bylaws and policies, the council removed its club status to replace it with a Memorandum of Understanding (MoU). As opposed to being signed, the MoU is actually being negotiated.

Mensah: “[The Greek community] forms a huge portion of students on campus.”

False: There are 1,514 active undergraduate members of fraternities under the purview of IFC. According to IFC, UBC Fraternities’ 1,514 members make up almost half of the students in Greek Life at UBC. Assuming there are about 3,000 students in Greek Life out of UBC Vancouver’s 57,250 undergraduate and graduate students, they would form 5.2 percent of the student population. Mensah could be highlighting the idea of a community surrounding Greek Life, but it’s hard to argue 5.2 percent constitutes “a huge portion” of students.

Wilson: “Every time you book a ticket [through Showpass] 9 per cent of every ticket sale to Showpass as service fees”

Wilson: “Two years ago, there was a referendum to which authorized the sale of artwork from [Hatch’s] permanent collection”

True: While Wilson got the year wrong (the referendum was in 2017), 80 per cent of the voters said “yes” to authorize the sale of artwork from Hatch’s permanent collection in the 2017 AMS referendum.

True: Even though the ethical trading policy hasn’t been revised recently, according to the 2018 AMS Sustainability report, AMS Businesses sell “only organic, fair-trade coffee.”

Wilson: “Two years ago Chris kicked Franz Kurtzke from the Nest and didn’t give an explanation. And thus, that was overturned.

Partially true: On January 17, 2019, Kurtzke set up a booth outside the Nest to protest the concept of toxic masculinity and highlighted what he called “discrimination against men at UBC.” Former AMS VP Admin Chris Hakim asked Kurtzke to leave the AMS property, but he refused. Kurtzke presented his claim against the Women’s Centre at the AMS Operations Committee meeting. After the meeting, Hakim served Kurtzke with a notice banning him from the AMS property for 15 days citing “harassment and trespassing.” Kurtzke’s suspension was lifted at the second meeting because the committee ruled Hakim “did not follow proper procedure in its execution.”

Update, March 4 at 7 p.m.: This article was updated to fact-check Aidan Wilson's claims about whether Operations Committee publishes its records, and Sylvester Mensah Jr's goal to host more student art exhibitions in the Nest.

This is a live article and will be updated as further information come to light.