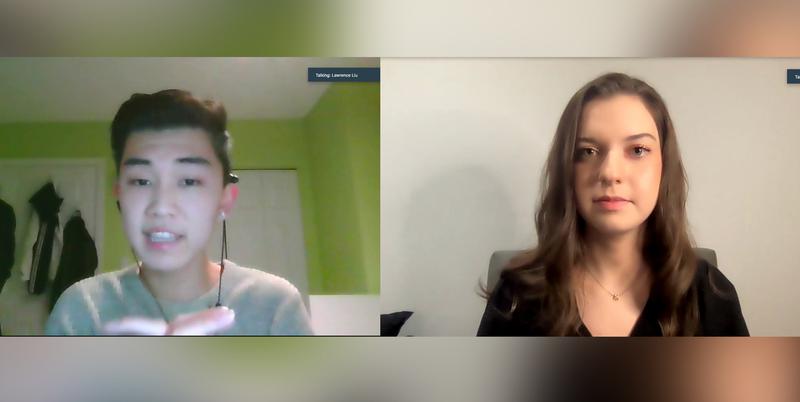 Liu highlighted his “relevant experience and tangible plans." Benson said “bridging the gap” between students and the AMS represents the core of her platform. Jasmine Foong

Benson and Liu mostly responded to audience questions and rarely engaged in direct clashes with one another. The open-debate portion often ended in silence, prematurely.

The candidates did diverge on one critical issue — how to ensure compliance with the mandatory mask policy in the Nest.

Liu said that he would take an informative approach by reminding visitors of the policy through increased signage in the building and a Canvas module where community guidelines would be published. Benson promised a COVID-19 dashboard on the AMS website with regular updates on public health information, policies and risk assessments.

Benson questioned the time-effectiveness of Liu’s proposed Canvas platform, saying that while she would support that project in the future, the AMS needed to act urgently on the matter of COVID-19. Liu said that social media and increased signage in the Nest could also help “hammer home” the COVID-19 guidelines.

“When it comes to COVID-19, this isn’t something we can be loose with,” Benson said. “This is something that needs a firm plan of communication and action.”

On the issue of inadequate Indigenous consultation on the Sustainable Action Plan, Benson pointed out that coordination with Indigenous students was being used by the AMS as “a buzzword” and not contributing to “fruitful conversation[s].” She vowed to bring marginalized student voices “to the forefront” and ensure adequate consultation on every decision.

Liu said the AMS should take a holistic approach to sustainability and that the society could do more than “just have a few potted plants in the building.” He also said he would reach out to Indigenous communities and implement their ideas, but did not go into specifics.

When pressed for specificity, Liu admitted that he does not have “too much experience working with Indigenous groups,” but hopes to engage more student leaders as part of the consultation.

Both candidates presented plans for helping clubs struggling with low engagement. Liu said he would institute a “grace period” for clubs at risk of being deconstituted and work with them to address engagement problems.

Benson proposed a clubs recovery benefit that would provide online resources such as training webinars, COVID-19 supplies if in-person events are to happen and expanding the video conferencing grant set up by the previous VP admin.

An audience member asked a question about CampusBase and what each candidate planned to do with the platform.

Benson said that CampusBase, in its current state, is not intuitive and “not worth it” for clubs to invest time and effort into. She said she would use webinars to teach clubs how to use it and advertise the platform. Liu said he would also continue to promote the platform by helping student leaders better manage their CampusBase page and increase usership through his Canvas course.

Neither candidate acknowledged the array of privacy breaches the platform suffered.

On a question of how the candidates would ensure financial responsibility throughout their term, Benson said she would work closely with the VP finance to make sure that “every investment is worthwhile.”

Liu initially suggested a $2,000 conference grant that could be reimbursed, but when the moderator again pressed for more specificity, he added that he would work to “holding different people in [his] office accountable on what they’re spending.”

In their closing statements, both candidates made their final appeal to students.

Benson said “bridging the gap” between students and the AMS represents the core of her platform and urged students to vote.

“Last year’s voter turnout crashed to 11.6 per cent. we can do better and we need to do better,” Benson said.

VP administration candidates will debate again at the Great Debate on Saturday, February 27. This article is part of our 2021 AMS elections coverage.