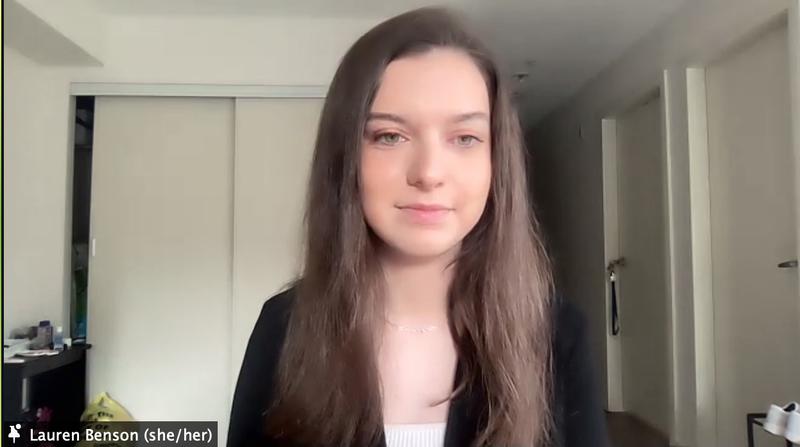 After Lawrence Liu withdrew last night, AMS digital media coordinator Lauren Benson is now the lone candidate in the VP Administration race. The absence of competition was reflected at the Great Debate earlier today in which Benson stuck to familiar talking points.

When asked how she would address CampusBase privacy issues and deal with another hypothetical privacy breach, Benson offered a vague answer that focused on increasing transparency.

She criticized the timeline for the release of the CampusBase privacy impact assessment and vowed to release a “more understandable and less technical version” of the assessment if breaches were to occur during her term.

“I will release [direct information] to the students so they don’t feel like the AMS is hiding something,” Benson said.

Benson provided a similar response to a question about how she would change the current disclosure process in relation to Policy I-17, the AMS’s sexual violence policy. She said she would educate new AMS staff on the policy and make sure they “understand the gravity” of it.

Benson expressed muted support for the $26,000-sustainability centre, narrowly approved by AMS Council on Wednesday. She said it must be used to its full capacity.

“If we are going to invest that much of students’ hard-earned money, which we are, it needs to be something that is viable to everyone,” Benson said.

An audience member asked why communication remains so central to Benson’s platform despite it not falling under the VP Admin portfolio. Benson said that communication “affects all the work [the AMS does].”

“Without strong communication and without students being able to access the work that’s being done, that hinders every project every step of the way,” Benson said.