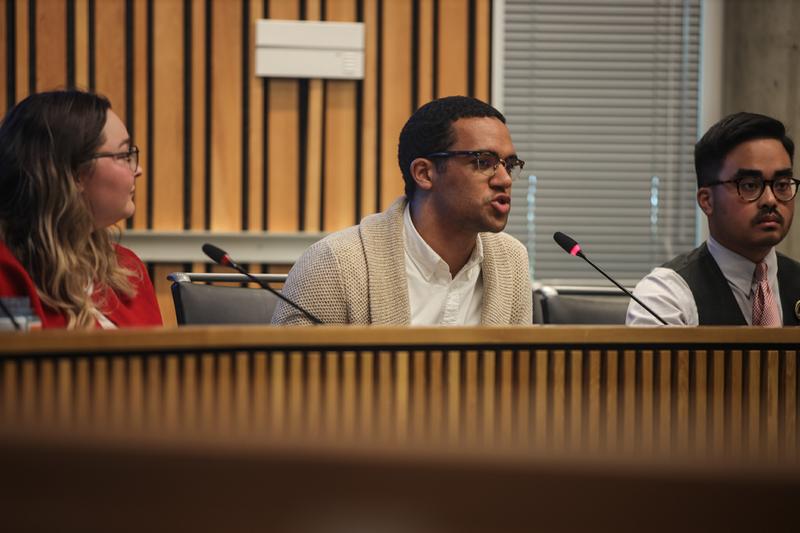 On Thursday, three VP External candidates faced off in the first of two debates in this year’s AMS elections. Salomon Micko Benrimoh

On Thursday, three VP External candidates faced off in the first of two debates in this year’s AMS elections.

The debate kicked off with the biggest topic for the VP External position this year: transit.

Ilnitchi said she would build on the past year’s work in making a Skytrain to UBC a priority.

Ilnitchi said she would use relationships she had built with members of parliament and capitalize on the federal elections to put pressure on government officials to commit to the UBC Skytrain extension.

Shelling shared Ilnitchi's long-term transit goals. In the shorter timeline, he wants to address existing issues with transit, such as wait times.

Like Shelling, Ty would also like to implement transit improvements in the short-run — but his platform offers different plans for doing so.

“We can all agree that we need to commit to the Skytrain,” Ty said. “But that is going to take at least ten years to complete. So that’s why I want to push for short-term needs as well.”

Ty’s platform calls for the introduction of ride-hailing services, such as Uber, which are currently banned in Vancouver. Shelling responded that such services might not be a viable option for students from a low-income background who are commuting from a distance.

“We need to be looking into better alternatives,” said Shelling, “such as more busses or different lines that run to UBC.”

In the debate that followed this question, Ty also criticized the current VP External office’s advocacy efforts on this issue. He said the campaign was launched late and the number of student testimonials they presented to the Vancouver City Council consultation was limiting.

Ilnitchi responded that “advocacy is very fluid,” and that she did not know it was on the City Council agenda until very late.

Candidates then debated whether or not the provincial and federal governments have taken adequate measures to support sexual assault support policies.

Ilnitchi brought up her experience working to hold the provincial government accountable to addressing the issue of sexual violence, and supporting working groups across the province.

She and Shelling also stressed that advocacy against sexual violence must be survivor-centric.

“We need to be pushing both the province and the federal government to be taking this seriously,” Shelling said, adding that support for survivors across university campuses must be expanded and made a priority by the government.

Shelling and Ty both acknowledged that the provincial government working group is a good step forward in tackling sexual violence.

“We are moving in a good direction in addressing sexual violence,” Ty said.

But he also stressed the need to increase education about sexual violence and its prevention so that the appropriate response is preventative rather than reactionary. He added that he would bring back the Equity caucus to achieve a similar end in working towards sexual violence prevention.

Revving up for federal election

Contestants then faced off on what their priorities are for the upcoming 2019 federal election and how they would encourage student engagement.

“The federal election is a crucial opportunity to ensure that student voices are heard,” Ilnitchi said.

Ilnitchi mentioned that using relationships with stakeholders that she has established as the current VP External, she would put pressure on the federal government to include the issues of climate action and student affordability in their platforms.

Shelling agreed with Cristina that the federal elections are a very important time for student voices to be heard. But he emphasized the importance of student mobilization and a “Get out the vote” campaign, while educating students on issues such as climate advocacy, affordability and open educational resources (OERs).

In contrast, Ty mentioned that he would focus on reaching out to candidates in the federal election to invite them to speak at UBC so students can directly raise issues to these representatives.

The issues he would focus on are financial aid, housing, student interest rates and climate change.

In the open debate, Ilnitchi once again drew attention to her experience as VP External in student engagement.

“What is your experience running a campus-wide campaign,” she asked the other candidates, “acknowledging that I have already undertaken this work and I’m going to continue doing it, hopefully?”

Shelling referred to his leadership of the Stick It to Cancer charity events, and his experience organizing large campaigns through his stints as Inter-Fraternity Council first vice-president and interim president.

"I don't have campaign experience, but I have experience holding you accountable when your campaigns weren't on time," said Ty.

In the audience question period, a question was raised as to how candidates would work in tandem with Indigenous groups and UBC to make CleanBC a practical and effective reality.

Ilnitchi stressed that representing Indigenous voices is an important component to all the types of advocacy involved in her campaign. With respect to CleanBC, she mentioned that she is committed to “collaborative advocacy” with different student groups.

Shelling responded to this question by highlighting that since students will be the ones facing the consequences of climate change, he would incorporate meaningful consultation with Indigenous groups so that he is speaking “not on behalf of them but ... with them.”

He also mentioned that he would like to support a comprehensive climate action plan with student unions across the country.

“That way we can align our advocacy for specific campaign platforms such as this,” said Shelling. “We’re stronger when we advocate together.”

In her closing statement, Ilnitchi highlighted her role and progress as VP External the past year. “I am the most experienced candidate, with a lot of passion and knowledge,” she said.

Shelling closed by affirming that he is the best candidate for the VP External position because he is “passionate, experienced,” and “willing to learn.” He mentioned that his personal experience with financial struggles has led him to advocate for equity and access in his platform.

“This is not a dynasty,” Ty said, a clear response to Ilnitchi and Sheling’s closing statements. “We are not bound to elect people solely because they work on the portfolio that they are trying to represent.”

He encouraged students to keep an open mind in voting for new representatives.

All three candidates will meet again today from 4 to 9 p.m. in the lower atrium of the Nest for the AMS Great Debate.

This article has been updated to correct Shelling’s involvement with the IFC.