We fact-checked everything your VP External candidates said 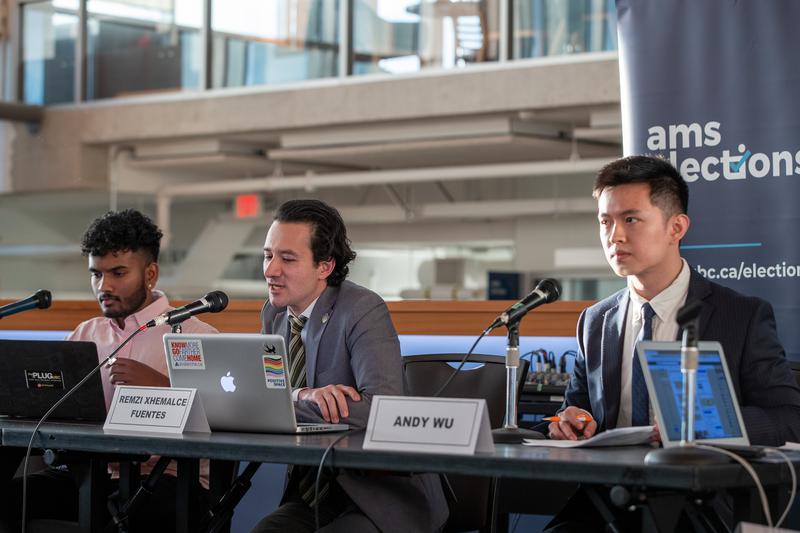 The three candidates at the Great Debate on February 28. File Zubair Hirji

Here are our deep dives into some of the more questionable claims made by your student candidates for AMS VP external.

Andy Wu: “[I will] register the AMS as a third-party political advertising group at Elections BC.”

Misleading: This platform point was reiterated by Wu during the debates. But, the AMS is already registered as a third-party advertising sponsor for Elections BC.

Wu: “77 per cent of students voted in favour of demanding that UBC divest from all of its fossil fuel investments.”

True: 76.9 per cent of UBC students voted for divestment in a 2014 referendum.

Kalith Nanayakkara: “[I will] support the implementation of the Provincial Mental Health Hotline.”

Misleading: There is already a mental health helpline in BC.

Nanayakkara: “BC budget recently contributed $24 million to towards brands supporting about 40,000 students.”

True: According to a BC Budget report, over 40,000 B.C. students receive up to $4,000 a year to help with the cost of programs leading to a degree, diploma or certificate. However, it is important to note that the $24 million grant is in addition to approximately $37 million the government is reinvesting from other grants.

Nanayakkara: “UBC, City of Vancouver have shown interest in building SkyTrain to UBC. We need to raise $30-40 million by the end of the year for business case.”

True: The City of Vancouver and UBC have shown interest in building SkyTrain to UBC. It looks like Nanayakkara arrived at the $30-40 million figure from a Daily Hive report.

Unclear: While we couldn’t find any statistics related to racism on UBC campus, there was an incident of anti-Black racism at a conference at UBC last summer.

Fuentes: “There are a low number of Indigenous students at this university and [the numbers] haven’t gone up, even though international students have gone up.”

Fuentes: “To the best of my knowledge, I do not see any conflict of interest.”

Context: Besides contesting for AMS VP External, Fuentes is running for GSS VP external relations. GSS President Nicolas Romualdi said it would be a conflict of interest if he wins both the races.

The Ubyssey’s debate coverage explains this issue in more detail.

Note: As mentioned in Fuentes’s Ubyssey candidate profile, “Fuentes walked off the stage within the first five minutes of the Great Debate debate, after declaring that the Graduate Student Society (GSS) had unfairly questioned his candidacy in the previous debate.”

Wu: “We need to register AMS as registered third-party advertiser”

Misleading: As mentioned above, the AMS is already registered as a third party advertising sponsor with Elections BC.

Nanayakkara: “If we register as a third-party advertiser, [a polling station on campus] won’t be possible.”

False: The AMS is already registered with Elections BC as a third-party advertising sponsor and has been since 2009 or earlier. The Nest was a polling location in the 2017 provincial election.

Wu: “In AES, half the students said they are living further off-campus because of housing cost, a third of them said because of cost of housing in Vancouver, they have considered transferring to another university.”

True: According to the 2019 AMS Academic Experience Survey, 54 per cent of surveyed undergraduate students selected “lack of affordable housing” as the most common contributor to their lack of a fixed, regular and adequate nighttime residence. Thirty-eight per cent of the surveyed students that state the cost of housing has caused them to consider attending another university.

Nanayakkara: “To my knowledge we are yet to register” in response to a question, “Is AMS a lobbyist registered under the Lobbyist Registration Act? If not, should it?”

Wu also mentioned the importance of AMS registering as a lobbyist.

Misleading: The Lobbyist Registration Act requires organizations to register individual lobbyists during the time they are actively lobbying, and the AMS is a registered lobbyist group according to the Office of the Commissioner of Lobbying of Canada.

Update, March 5: This article was updated to reflect that the AMS is a registered lobbyist group.

This is a live document that will be updated as more information comes to light.