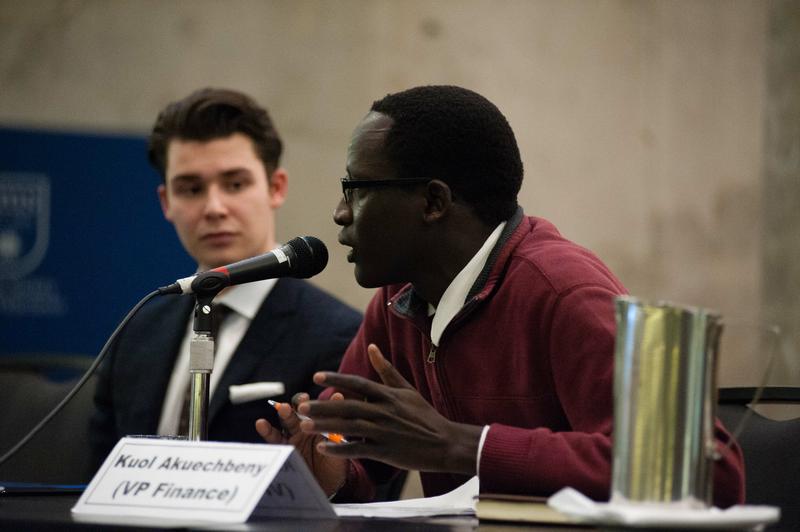 The Great Debate saw a heated clash between remaining VP Finance candidates Adam Forsgren and Kuol Akuechbeny over the AMS businesses, the investment portfolio and the controversial endorsements of the Inter-Fraternity Council.

When asked about the recent brand changes and overall profitability of AMS businesses, candidates differed sharply in their angles. Forsgren said the brand changes reflect the VP Finance office’s ability to be receptive to student needs.

“Going forward, the key [is] to understand the logistics for each business and stay up to date with what people want,” he said. “I don’t necessarily see that as an issue.”

“We are a student society ... we want to make sure the products or goods we produce are affordable for students,” he said “Adam is going to do exactly what Alim is doing right now — someone didn’t pay rent in the building for two years!

“I’m the outsider who can bring change.”

Forsgren disagreed with this assessment and put more value in experience.

“I don’t think just because you’re outside means that change won’t happen for better or for worse,” said Forsgren. “It’s about experience.”

The comparisons between Forsgren and Lakhiyalov didn’t end there. If elected, Forsgren would be the fourth consecutive Sigma Chi to hold the office, for the fifth year running. Akbeucheny has previously made a statement to The Ubyssey expressing concern about this trend.

“We shouldn’t have one part of UBC monopolizing the VP Finance position,” said Akuechbeny.

“I don’t believe that being a Sigma Chi means you get this job,” said Forsgren in response. “Everyone has a vote ... It just so happens that Sigma Chi’s happen to be very ambitious, and support one another to drive to campus involvement.”

When the topic turned to investments, Forsgren was back in comfortable territory, demonstrating his familiarity with the AMS investment portfolio as the current financial systems administrator. However, he and Akuechbeny soon clashed again on whether AMS investments should prioritize stable returns or go towards moral causes.

“They’re not mutually exclusive — our policy right now has a low return for a reason and that’s because we don’t want to have a risky investment,” said Forsgren.

“We want to make sure that is put best to use and that we are not taking advantage of the student’s money.”

Akuechbeny criticized the current AMS portfolio, arguing that the AMS should prioritize moral investment instead.

“Our investments should align with the goal of what our values are,” he said. “It is your moral values that drive your business, not the other way around.”

Prior to the debate, both candidates were endorsed by the IFC — Forsgren for the VP Finance position and Akuechbeny for Senate. Forsgren accepted the endorsement, but Akuechbeny rejected his, citing a perceived bias in how the IFC makes its recommendations and his solidarity with incumbent VP Academic candidate Max Holmes’s concerns about the IFC’s priorities on sexual assault.

Forsgren defended his actions, expressing sympathy for Holmes and other survivors of sexual assault while emphasizing the positive influence of Greek life on campus.

“I accepted the endorsement because I’ve seen the Greek village has added such value, especially into my life,” said Forsgren. “I do not think we should take anything away from survivors, but I can’t comment on it further.

“There is a discussion that needs to happen.”

Akuechbeny reaffirmed his own support for Holmes, attacking Forsgren’s statement as contradictory.

This article has been updated to correct the spelling of Kuol Akuechbeny’s name. The Ubyssey regrets this error.