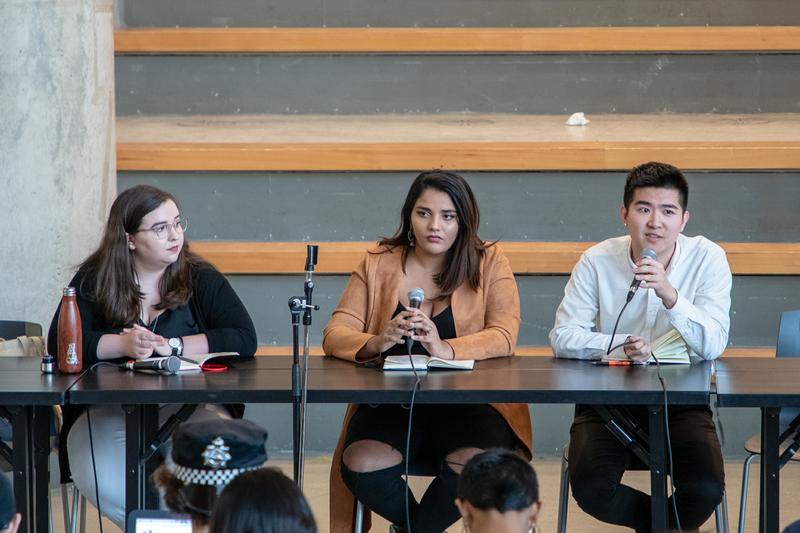 The first question asked candidates how they would work to improve food security on campus. Zubair Hirji

Julia Burnham, Vandita Kumar and Nick Pang returned to the fundamental topics that dominated Tuesday’s debate — and much of their campaigns — including accessibility, mental health support and student engagement.

After a tepid start, the candidates did their best to separate themselves from their opponents, with mixed results.

Pang and Kumar shared similar sentiments when it came to their platform goals of affordability, accessibility and mental health support on campus.

Pang, the current co-chair of the Senate student caucus, outlined his goal of improving accessibility through affordable textbooks and modern classrooms.

The fourth-year doctor of pharmacy student repeatedly referenced his status as a professional student and positioned himself as an advocate for those students, a key point of his platform.

Vandita Kumar, the current president of the UBC Residence Hall Association, echoed Pang’s statements on affordability and accessibility and called for a “restructuring [of] the internal advocacy system” within the AMS through static committees.

Academic Campaigns and Outreach Commissioner Julia Burnham distinguished herself as the candidate “pushing for new ideas” beyond “the basic tenets” of the VPAUA portfolio within which she currently works.

She cited her “track record of holding the university accountable” during her three years as a Ubyssey writer, and pledged to support the SASC and to push for divestment at UBC.

The first question asked candidates how they would work to improve food security on campus.

Pang suggested lobbying UBC to reduce food service costs and noted that graduate students use the food bank most frequently.

Kumar stressed the importance of raising awareness among students “as early as possible … typically around times of the year in the term where they’re more likely to start running out of meal dollars.”

Burnham said the “significant” data gathered from the Academic Experience Survey (AES) on food insecurity opened up conversations with university administrators including a $10,000 commitment to the AMS Food Bank from UBC President Santa Ono per year for five years.

Pang responded that it was important to go beyond data and “listen to the voices of people who are actually experiencing this.”

Burnham fired back, stressing the importance of data-based advocacy.

“I wouldn't under-score the weight and significance that having statistics brings to a Board of Governors table,” said Burnham.

The next question asked candidates how they would improve accessibility on campus for students with disabilities.

Kumar acknowledged that while she wasn’t in a position to speak for disabled students, she supported the targeted collection of information on those students through methods like the AES.

Burnham said the focus should be on consulting with disabled students and increasing support services.

When Pang reiterated his call for lecture recordings, Burnham cautioned that faculty concerns surrounding academic freedom could limit the scope of the service.

Pang shot back, arguing the “vast majority” of professors supported the service and the infrastructure already exists to implement it in many buildings.

The final question asked if and how the candidates would lobby for lower tuition. Pang and Kumar skirted the question, focusing instead on holistic approaches to affordability and accessibility and pivoting back to their campaign goals.

Burnham was the only candidate to take a strong stance. “Full stop, the AMS is mandated to advocate for lower tuition.”

During the audience question period, incumbent VPAUA Max Holmes asked how the candidates would work with student leaders to accomplish their goals.

Pang took the opportunity to criticize Burnham and the VPAUA office for failing to consult with the Engineering Undergraduate Society on fall reading break.

“I have limited autonomy with the VPAUA guiding what I do. Attacks on what I’ve been able to do shouldn’t be directed personally at me,” said Burnham.

“We shouldn’t beat around the bush,” she added. “EUS and AMS relations have not been great this year.”

In his closing statement, Pang took the VPAUA office to task.

“I do not believe that the current office has done enough in terms of working with students all over campus,” he said.

“Things like fall reading week should include voices from everyone, not just the people from the AMS using data from students to push their own agenda.”

Kumar said she wanted to focus on long-term change within the society. “The AMS should be improving with each year and we need to lay down the groundwork to ensure that happens,” she said.

Burnham underscored her experience holding the university to account and urged students to vote yes on the SASC referendum.

Voting for the AMS elections will take place March 11 to March 15.