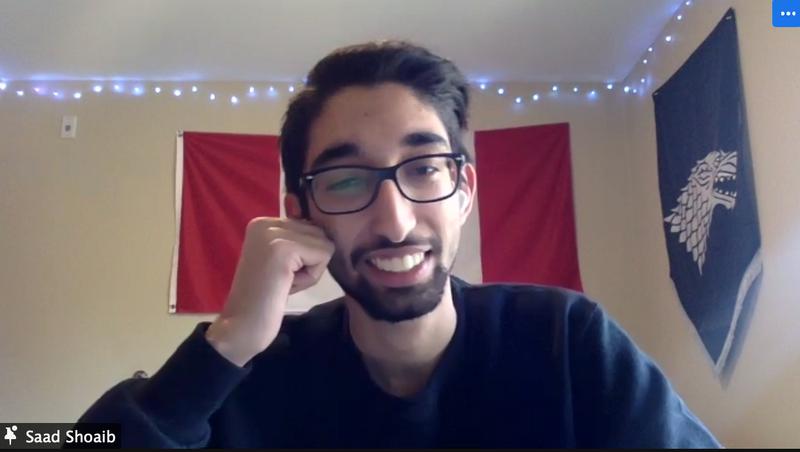 Claiming he regularly worked 80 hours a week as this year’s associate VP, Shoaib described how he’d advocate for those student groups — but faced concern that his fraternity membership could hamper his ability to advocate for sexual assault survivors and oversee Greek life negotiations.

The AMS voted earlier this year to release a statement condemning the human rights situation in Hong Kong, which raised some concern that the AMS’s stance on those crises could put certain students at risk.

Shoaib said that he would work with administrators and the VP academic and university affairs for those students to get mental health support, but that the AMS has a responsibility to speak up.

“The AMS has to take a stand. It has to stand in solidarity with its students and make sure that democratic principles are being preserved,” Shoaib said.

Part of his platform is to include Indigenous students in lobbying trips that his office would take.

In the past, Indigenous students have criticized the extractive nature of AMS consultations and the emotional labour involved. Shoaib initially spoke generally about consulting the Indigenous community.

“It’s important that we don’t treat this like a tick box,” he said. “Indigenous students need to be a part of the conversation. We need to be treating this like a partnership.”

However, when pressed by the moderator to describe how that consultation wouldn’t be extractive, Shoaib wasn’t able to explain what he’d do to address the complaints.

On graduate students, Shoaib stressed the importance of the BC graduate scholarship and said he’d be lobbying the provincial government to make it permanent and expand it for non-STEM students.

But when asked what graduate organizations he’d consult with besides the Graduate Student Society (GSS), Shoaib wouldn’t name another body and said that the GSS was the main graduate advocacy group.

Shoaib’s membership in the Delta Kappa Epsilon fraternity drew concern regarding how it would affect sexual assault policy lobbying and negotiations with the Interfraternity Council (IFC). As an outside organization, Shoaib said the IFC would fall under his portfolio.

Shoaib defended his membership and said it wouldn’t be an issue. “My fraternity comes second when it comes to supporting survivors,” he said.

While AMS–IFC negotiations have fallen off this year after the IFC was deconstituted as an AMS club, Shoaib said he would put the work to his staff and the VP administration portfolio. He later added that he would excuse himself entirely from those discussions when asked by the moderator.

“I would recuse myself completely from those conversations while also making sure that the AMS’s interests are put first and that survivors’ interests are first,” Shoaib said.

Voting online begins on March 1 and is open until March 5. This article is part of our 2021 AMS elections coverage.

This article was updated to correct a misspelling of Shoaib’s name.