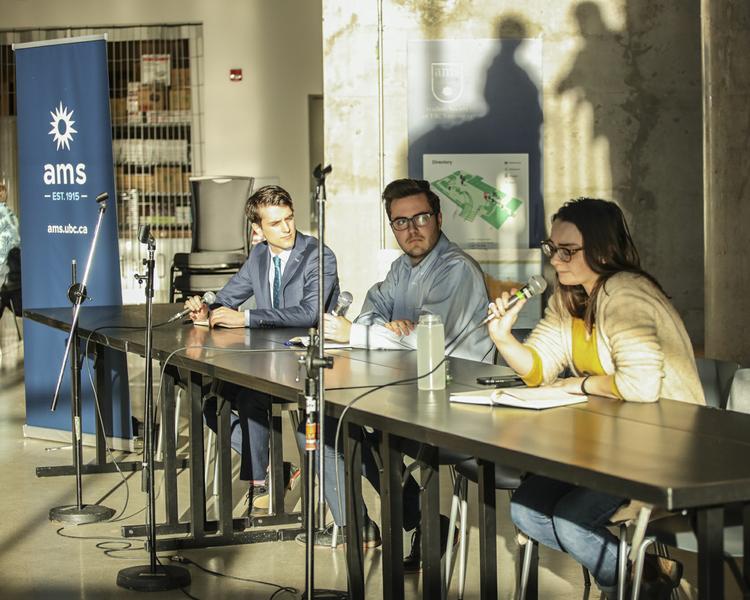 The Ubyssey is fact-checking every candidate’s platform and all the statements they made during debates. File Saloman Micko Benrimoh

With that in mind, The Ubyssey is fact-checking every candidate’s platform and all the statements they made during debates. We think it’s important for students to know when candidates are telling the truth, whether they’re being misleading and where they’re getting their numbers.

Here are our fact-checks for your candidates for Board of Governors (BoG).

Jeanie Malone: “... Policy 131 (Sexual Assault & Other Sexual Misconduct), which lists many resources and supports offered to survivors, but which were not reflected in academic (Senate) policies. This meant that in some situations, survivors were required to disclose multiple times.”

True. Survivors at the time reported being forced to disclose multiple times as the policy was first implemented.

Misleading. Holmes has been a strong proponent for supporting survivors and did pen a letter to the Board on the small policy review. However, his submission reads that "The AMS is supportive of the current process UBC is undergoing to strengthen the implementation of Policy 131." not that the AMS was demanding an earlier review of the policy. The Ubyssey was able to confirm that the review of Policy 131 was already slated to begin a year earlier so a final review could be completed by the provincial deadline of 2020. It wasn’t set for that time specifically because of Holmes’ advocacy.

Max Holmes: “I advocated for the first price cap on student housing and price variability between older and newer units to make student housing more affordable for students.”

True. But it wasn’t the cap he wanted. The current Housing Action Plan pegs student housing “At or below market rental rates; relative to the local marketplace per CMHC data and peer university across Canada.” In a submission to the BoG in January 2018, Holmes specifically called attention to that. Whether this is accurate benchmarking is another consideration, however, as the prices of student housing have been provided at or below these market rates.

Max Holmes: “In the past year, the Board has become less transparent in the timely releasing of dockets before meetings.”

True. Dockets are being released closer and closer to the meeting dates, mostly due to turnover in the Board’s secretariat staff.

Max Holmes: “Over the past year, the vast majority of students in every faculty have indicated that they support a fall reading break.”

Unclear. The survey run by his office found all faculties supported a break, but its methodology came under fire from the Engineering Undergraduate Society — whether the data is clean is still up for debate.

Dylan Braam: “While UBC guarantees below market-value rental housing for faculty and staff in many of the new and existing developments on campus, UBC does not reserve such housing for students.”

True. Students don’t get the same perks as faculty for housing outside of residences.

Dylan Braam: “I chaired the Ad Hoc Hiring Committee this summer, which took over the hiring process for the AMS Ombudsperson and Elections Administrator after there were delays in filling these important positions by the HR Committee.”

True — but what Braam doesn’t mention is that the HR committee was not consulted on these changes, according to its former chair.

Awais Quadre: “... to enrich student lifestyle at the UBC campus, I will drive an initiative towards expanding Policy 15 that will effectively make marijuana just as accessible as tobacco and alcohol on campus.”

Misleading. This is already the case. The policies around cannabis sales are actually more lenient than the ones around tobacco.

Awais Quadre: “I will work with the AMS to expand the SASC to further the educational work that they already do.”

Not his job. This wouldn’t fall underneath his portfolio either in Senate (which he is also running for) or the BoG.

Too early to say. Some of that money isn’t secured quite yet, although it will likely be cleared at the April Board of Governors meeting. We also can’t verify the number of hours Holmes has worked, try as we might.

Awais Quadre: “With the increase of the fee through the SASC, we can improve the education that is given [to students].”

Not his job. SASC is fully independent from UBC’s Board of Governors.

Awais Quadre: “There is a large need for mental health support on campus.”

Jeanie Malone: “As a governor you are elected to represent students, but you also have a duty to ensure the best interest of the university.”

True. Student governors are elected by their peers but owe fiduciary duty to the Board. That means they can’t do things like leak secret documents (in theory).

Dylan Braam: “UBC’s endowment per capita on a per student basis is far lower than other leading Canadian universities.”

True. The size of UBC’s endowment has exploded in the past few decades and now surpasses McGill University.

But on a per student basis, it’s trailing behind the University of Toronto and McGill, its two main competitors.

Dylan Braam: “There’s no actual reserved seats for members of Indigenous groups [on the Board].”

True. There are no reserved seats for the two nations on whose traditional territory UBC Vancouver and UBC Okanagan are situated.

Max Holmes: “2.5 million dollars of marching funding was secured in the AMS’s advocacy this yera on the budget … [to make] the university more accessible to Indigenous students.”

Max Holmes: “One of the first thing I’d like to address in the equity between how SVPRO is treated and how SASC is treated ... it’s something that we have addressed under the new academic concessions policy.”

True. The proposed changes to the concessions policy, which are still in draft form, mention that students can seek accommodation at SASC. However, students may have to show “documentation to support the grounds for concession may be required” if they sought support at a body not linked to UBC.

Dylan Braam: “I have spoken to a number of people who have been through the Policy 131 reporting and disclosure process.”

False. He only spoke to one student who disclosed. We only know this because he fact-checked himself on Facebook.

True. Malone is the chair of the BoG committee that oversees Policy 131.

Dylan Braam: "...We found out that the advocacy committee, chaired by Max Holmes, had not yet met to discuss something of great important to engineering,”

True. AMS Council mandated the Advocacy Committee to discuss the ongoing review of the Professional Governance Act on behalf of the Engineering Undergraduate Society and other affected students, but this did not happen.

Dylan Braam: "We found out they [AMS Executives] planned to cut SASC without consultation of survivors and without approval of AMS Council as required by code."

True. Removing SASC’s support services would have required a vote.

Dylan Braam: “After a motion to censure the executive failed to pass in a tie vote, Max Holmes, on behalf of the AMS executive, called councillors into his office to tell them to stop being so critical of the AMS Exec.”

Unclear. It’s true that Holmes held meetings with councillors in the fall and that some felt they were being shamed or intimidated. However, while at least three of the other four executives were aware of these meetings, none of them were privy to them. VP Finance Kuol Akuechbeny, President Marium Hamid and VP External Cristina Ilnitchi all stated they believed the meetings were cordial until recently, so it’s unclear whether Holmes acted alone or on their direction. VP Admin Chris Hakim has declined to comment as of Thursday.

Max Holmes; “There was a one-year limit on complaints on investigations [under Policy 3[. We were successful in getting rid of that limit, “

Misleading/too early to say. Holmes is speaking about Policy 3, UBC’s discrimination and harassment policy. He’s correct that the revised draft doesn’t include a previous 1-year deadline for submitting complaints — but the new version hasn’t been approved yet, and may well not be implemented considering the Faculty Association’s opposition.

Dylan Braam: “They are trying to change the policy [3] to … make it just a “discrimination” policy and make it fall to incidents of harassment under the BC Human Rights Act.”

True. “Harassment” is being removed from the policy and its scope is being somewhat restricted, something the Faculty Association is unhappy about.

True. Braam is currently chair of the AMS governance committee and didn’t consult outside the AMS for recent proposed bylaw updates or other policy changes. He defended himself at the debate by noting that his changes would still have to be approved by AMS Council, where a broad number of faculties are represented.

Dylan Braam: “The university has tried to provide us with a legal opinion that says it’s against the university’s fiduciary interest to divest,”

True. UBC Counsel submitted an opinion that divestment "would not be consistent with the board’s fiduciary obligation to endowment donors.” But that statement was challenged by two law professors, including a former UBC Counsel.

Do you have thoughts on this year's election cycle? Reach out to opinions editor Tristan Wheeler at opinion@ubyssey.ca to have your voice heard.