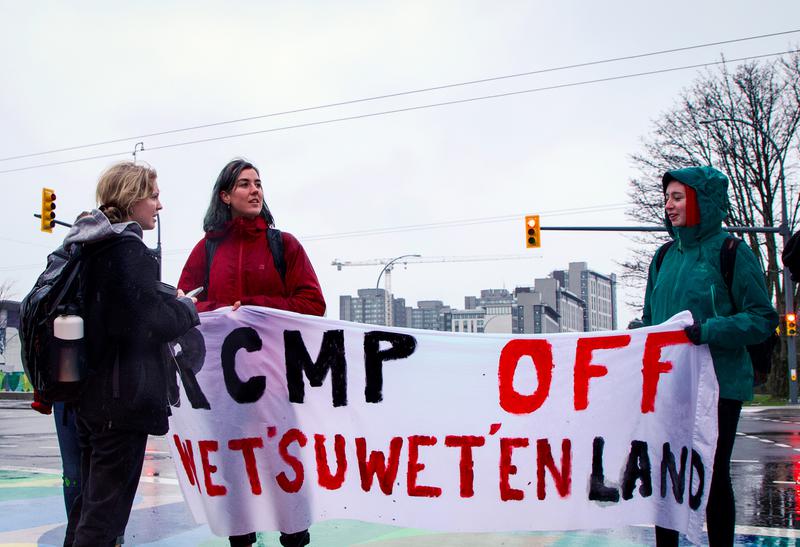 "A lot of people here are a part of [Extinction Rebellion] but this action is about solidarity and it's not a part of any other movement other than solidarity with Indigenous nations.” Sarah Zhao

Morning traffic to UBC came to a halt on Thursday morning as protestors standing in solidarity with Wet’suwet’en land defenders blocked the intersection of Wesbrook Mall and University Boulevard.

Forrest Berman-Hatch, a second-year student who participated in the protest said most of the public was “quite supportive” and “impressively understanding.”

“A lot of people here are a part of [Extinction Rebellion] but this action is about solidarity and it's not a part of any other movement other than solidarity with Indigenous nations,” he added.

The demonstrators also handed out flyers to passers-by that called for “the immediate withdrawal of all RCMP and CGL from sovereign Wet'suwet'en territories.”

Liam Gannon, a second-year urban forestry major explained the protestors were “shutting down Canada” and protesting in solidarity with the Wet’suwet’en call to action.

“... We're participating in a system that is actively arresting people on their own land and invading people on their sovereign land. It's important to realize that the tradition of genocide is continued and any claim to reconciliation is false and invalid,” he said.

This action comes after a week of protests in Vancouver and Victoria in support of the Wet’suwet’en hereditary chiefs who are reoccupying their unceded territory, aiming to block construction of the Coastal GasLink pipeline. While Coastal GasLink received support from five elected band councils, the hereditary chiefs of have consistently opposed the pipeline’s construction.

In Vancouver, protestors have shut down the Granville Street bridge, blocked the Port of Vancouver and closed down the intersection of Broadway and Cambie. Another protest is also planned for today in Kitsilano.

On campus, students set up an art installation on Febraury 12 in front of the Reconciliation Pole to raise awareness, and on January 28 youth activists from UBCC350, Our Time Vancouver and the UBC Social Justice Centre occupied the office of BC Attorney General and Point Grey MLA David Eby.

RCMP officers were present at the demonstration today and confirmed they were there to make sure the protest remained non-violent.

Traffic towards the UBC Bus Loop was at a standstill on Wesbrook Mall and University Boulevard. Buses to campus including the 25, 4, 14, 49, 99, 33, 480 and R4 faced delays and were rerouted to avoid the blockade.

In an emailed statement to The Ubyssey, TransLink confirmed that at 9:30 a.m. the protestors cleared the intersection and buses returned to their regular routes.

Morgan, another protestor, said the blockade forces people to think about what’s going on in Wet'suwet'en territory.

“As an Indigenous person, I really feel it's important for me to stand up with people who not only care, but who are also impacted by it … There's no way I can just sit in class. Even when I do go to class, it's always in the back of my mind,” he said.

— with files from Tristan Wheeler and Sarah Zhao

This article was updated to clarify that UBCC350 members were not affiliated with organizing the direct action.