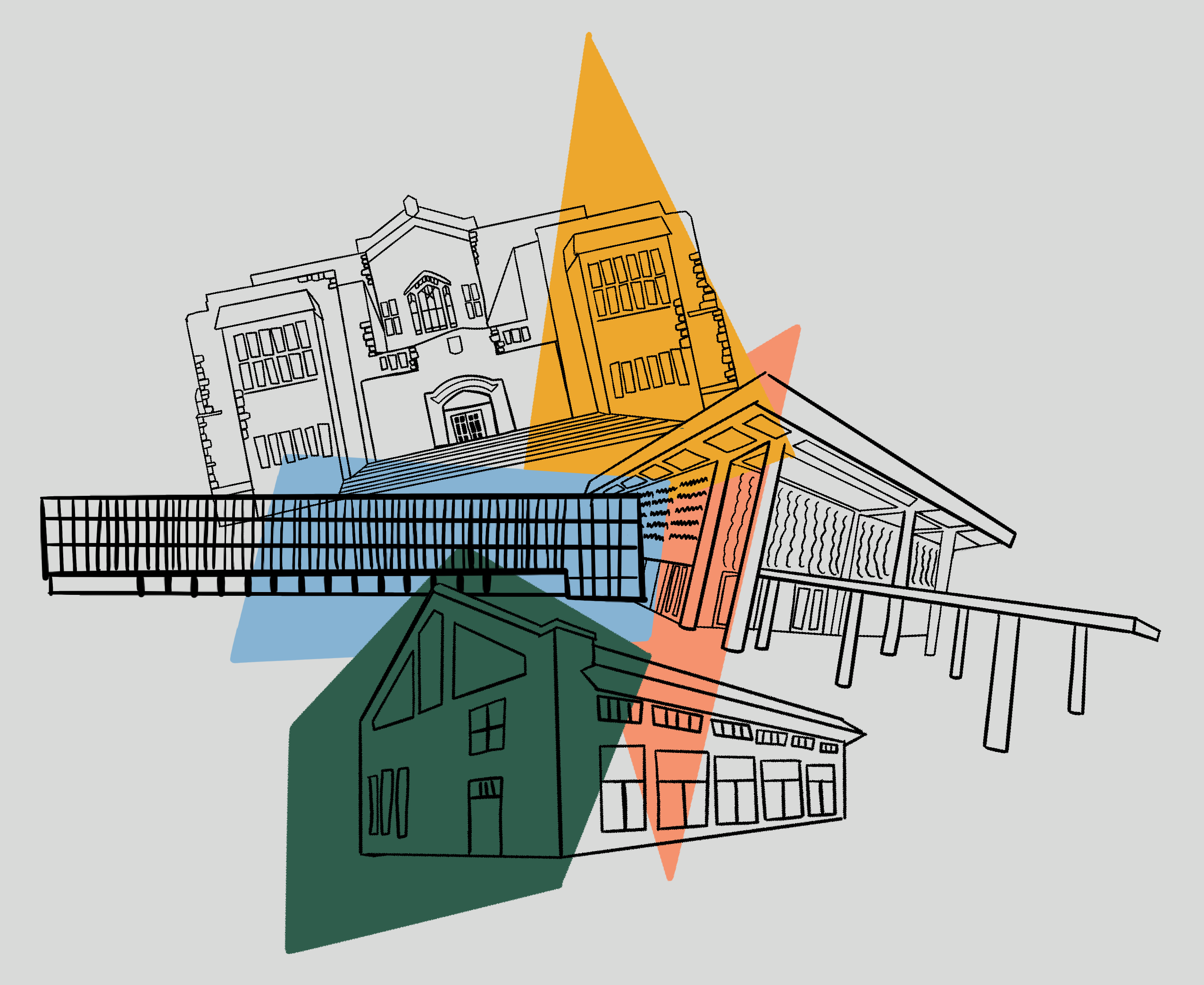 As questions arise over whom should be honoured in monuments after worldwide anti-racist protests, we took a look closer to home. Lua Presidio

The numerous buildings on UBC’s sprawling campus often serve a commemorative purpose — but we found that their names don’t represent the diversity of the university community.

While walking around UBC’s sprawling campus, you might notice that the buildings around you serve a special purpose. Not just where you listen to lectures, and no, not study space.

Through their names, a number of UBC buildings commemorate significant members of the UBC community. Each of the buildings at UBC’s Vancouver campus is named after a discipline, a location, a donor, a past UBC president, alumnus, professor or dean.

As questions arise after worldwide anti-racist protests over whom society’s monuments should honoured, we took a look closer to home.

“Across the nation, there’s been a lot of those issues around the appropriateness of historical naming,” said AMS VP Academic and University Affairs Georgia Yee, who sits on the Board of Governors naming committee. “So with other post-secondary institutions, they are facing a bit of a reckoning around how we name … some of our buildings.”

To learn more about these names, The Ubyssey looked into who is being commemorated with information from university library archives and Board of Governors minutes, gathering data for all campus building naming decisions since UBC adopted its naming policy in 1998.

A white, male, colonial past

The Ubyssey was able to collect data for 175 buildings on the UBC Vancouver campus. Twelve are named for objects including trees and fruit. Eight are named for external organizations, with fourteen named after a location. One building, War Memorial Gymnasium, makes up its own category, and we found no information on five residences outside of the main academic campus area.

While 67 buildings are named for their function or after faculties and departments, the race and gender breakdowns of the 63 buildings named after people do not represent the diverse backgrounds of university community members today.

Fifteen were named for professors, department heads or people involved with founding a department, while fourteen are for businesspeople. Of the two politicians, one was a lieutenant governor of BC and the other was a governor general of Canada. Six didn’t fit into a category — those include cultural figures such as economist Dr. Inazo Nitobe or those who were primarily involved with UBC through donations such as Helen and Morris Belkin. At least 27 of the 63 overall either donated to the university or had a foundation make a contribution in their name.

Fifty-six buildings named after people commemorate men, such as donor Peter A. Allard who sued the university last year to have his name printed on all UBC law degrees, and Douglas Mitchell, former Thunderbirds football player and university donor. The majority of these 56 are white.

Yee wasn’t surprised that white men are overrepresented — the demographic is representative of UBC’s colonial past. “UBC and a lot of university institutions have always traditionally upheld the voices of white men, and those have been the people who have traditionally and historically called the shots.”

Eight of the buildings commemorate Asian people, making up around 12 per cent of buildings across campus. Of these that represent visible minorities are the Chan Centre for the Performing Arts, recognizing a donation from the Chan Foundation of Canada, and the Robert H. Lee Alumni Centre, named after the late former chancellor Robert H. Lee. Two other buildings were named after Christian saints.

From academics to donors

The 142 naming decisions since 1998 shed light on the lack of buildings named after people from minority communities. Ninety-one of the decisions were for buildings, with the remainder for plazas, streets, parking lots, parks, fields and monuments. And among those 91, 83 were for new buildings or changing an existing building’s name to commemorate a new person. Five were minor wording changes that kept the same person in the name, and one was to number the Totem Park residence buildings.

What UBC building name changes were named after since 1998

Two decisions were for the discontinuation of the D.H. Copp Building name and the revocation David Sidoo Field name. The university planned to demolish Copp for the new School of Biomedical Engineering building in July 2020 — Copp is closed but still stands — and former Thunderbirds football player Sidoo fell from grace after pleading guilty to involvement in a United States college admissions scandal.

Twenty-seven of the decisions from 1998 onward were to name a building for an individual, with the remainder adopting outside organization names, descriptions of the building’s location and function as well as other creative names such as Orchard Commons or Exchange Residence.

There’s little race and sex variation among those 27 buildings named for individuals — 22 adopted the monikers of white men. Only one building, Dorothy Somerset Studios, named in 2006 after the founder and first department head of UBC Theatre, was named after an individual woman.

Four buildings were named after opposite-sex couples, such as Leon and Thea Koerner for which the eponymous university centre was named in 1999 after a donation from the couple. In 2015, Chan Gunn Pavilion was named after husband-and-wife donors Chan Chit Gunn and Peggy Gunn.

In recent decades, UBC has shifted away from names of non-donor academics in favour of donors. The last decision for a new non-donor academic name was in 2007 to name the William A. Webber Medical Student Alumni Centre for a late Faculty of Medicine dean and university administrator. Since then, 13 buildings have received names for university donors.

Naming decisions for donors vs. non-donors

Yee said it’s “vital” to recognize donors that fund the university’s academic mission. Building name recognition incentivizes contributions from donors who often provide central funding for the construction of buildings in their name, she said.

What’s in a name?

Donors aside, UBC has also seen a rise in the number of Indigenous-related building names.

The Board of Governors in September 2020 approved hən̓q̓əmin̓əm names for five buildings for the future Pacific Residence. Developed in consultation with Musqueam, the names reflect animals of the Pacific Northwest.

Another hən̓q̓əmin̓əm naming decision was to adopt the Musqueam-gifted name c̓əsnaʔəm for a new Totem Park building in 2017. Another two Totem buildings received hən̓q̓əmin̓əm names in 2011.

UBC has only recently begun consulting Musqueam for naming decisions, but past attempts to recognize Indigenous peoples have fallen short: in the 1960s, it consulted with none of the Indigenous peoples that it went on to name six buildings in Totem Park Residence for.

As a result, those buildings received anthropological terms lacking nuance. Nuu-chan-nulth, Kwakwa̱ka̱’wakw and Secwepemc nations were anglicized as Nootka, Kwakiutl and Shuswap. And Salish doesn’t refer to a particular people — it’s a nod to a wide range of Coast Salish peoples inhabiting the Pacific Northwest.

These shortcomings contradict UBC’s recent efforts to reconcile its past wrongs toward Indigenous peoples, Yee said. “It is a very valuable move to not only consult with, but to directly involve Indigenous peoples and the Musqueam nation into the process and in the actual creation of a lot of education.”

Building names hold prominence on campus, and the names the university chooses to adorn its buildings can offer learning opportunities as visitors wonder what the name might mean. For example, the opening of the Indian Residential School History and Dialogue Centre — despite turbulence — marked UBC’s new attitude toward reconciliation.

When UBC updated Policy GA6 over a decade ago, it cemented the university’s naming procedures.

In March 1998, the UBC Board of Governors established Policy 124 on naming and a process for recognizing contributions to the university’s mission in the names of campus facilities. The policy’s last major revision was in 2009 to bring procedures from the president’s committee on the naming of facilities into the policy, and it received its current name of Policy GA6 in 2019.

This past September, university counsel identified GA6 as a policy priority because of the “issue of appropriateness of historical naming” along with an absence of name removal procedures and gift procedures.

The policy divides naming opportunities at UBC into three major categories: the naming of campus facilities, the naming of chairs and professorships and the naming of academic institutions. Campus building names require a recommendation from the president and Board approval.

The policy outlines three stages that the university must take to name a campus facility. First, the Naming Committee must recommend to the president that a facility be named to reflect its use, honour someone associated with the university or to recognize a donor.

Finally, the Board of Governors reviews the president's recommendation as well as any other relevant information to make its decision.

GA6 stipulates that UBC recognizes “truly outstanding contributions to the University’s mission in ways that protect and celebrate the core values of the University.” UBC has committed to divestment from fossil fuels, another value that could affect buildings named for companies from those industries. And with UBC signalling equity as one of those core values, Yee said UBC needs to consider diversity in its naming choices.

“In honouring an individual with name recognition … it is essential to be able to recognize the diversity of our campus community,” Yee said.

The university inaugurated its Indigenous Strategic Plan in September that will guide UBC’s reconciliation efforts in the long term. Also in final stages is the Inclusion Action Plan, which the university intends will implement the theme of inclusion in its Shaping UBC’s Next Century strategic plan.

Associate Vice-President of Campus & Community Planning Michael White said that the Board of Governors Naming Committee will review policy GA6 this fall to bring it in line with UBC’s equity plans.

The review is still in preliminary stages, Yee said. University counsel proposed that the policy return for board approval in June 2021.

“It is important for a policy like the naming policy to reflect those broad values and plans and policies of the university that are calling for an emphasis on equity, diversity and inclusion,” White said.