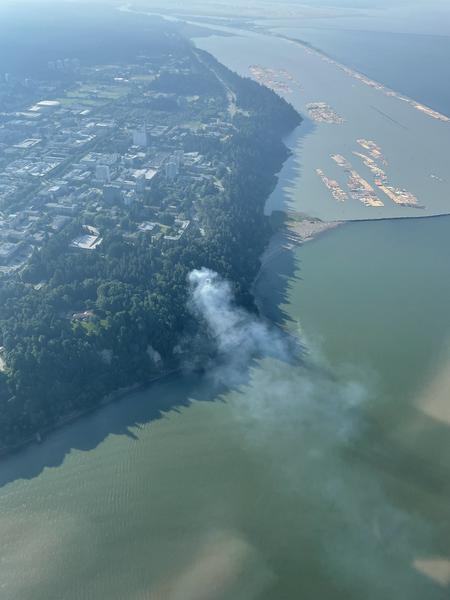 The crews learned about the fire, located in the forested area above Wreck Beach, just before 8 a.m. on Tuesday. Courtesy Amber Belzer

Vancouver Fire Rescue Services is currently responding to an active fire near Wreck Beach this morning.

The crews learned about the fire, located in the forested area above Wreck Beach, just before 8 a.m. on Tuesday.

Karen Fry, the fire chief of the City of Vancouver, instructed people to avoid the area in a tweet on Tuesday morning.

In a further statement to The Ubyssey, Fry said Coastal Fire Centre is at the scene with helicopter support. She said that “approximately 20 firefighters” are there, facing “extreme conditions.”

On campus, NW Marine Drive was closed from West Mall to University Boulevard.

In an email sent out to UBC, University Neighbourhood Association and University Endowment Land residents just before 1 p.m., Jen McCutcheon, the Metro Vancouver director for Electoral Area A said that the fire covered 150 square metres, and occurred between the Museum of Anthropology and Wreck Beach.

“Thanks to the combined efforts of responders including Vancouver Fire Department, Metro Vancouver and BC Wildfire Service, the fire was contained and put down by 11:00 am,” she wrote, adding that residents need to be “vigilant” and keep an eye out for fires in parks.

McCutcheon also said a province-wide campfire ban is expected to be put in place at noon tomorrow.

In press release shared around 2:30 p.m., Vancouver Fire Rescue Services said that the cause of the fire is under investigation, but that discarded smoking material is “suspected as the ignition source.”

“VFRS and the City of Vancouver would like to remind park and beach goers that smoking in any park or beach is prohibited year round. Those found will be reminded of the ban, but may face fines of up to $500,” the press release reads.

Luc Leblanc, a third-year student living in Marine Drive Residence, said he was concerned when he heard about the fire on social media.

He said he has a good view of the forest from his window, but said the scene looked fairly normal from his perspective.

“The only significant thing I noticed was … one helicopter flying over the area with a bucket [attached],” he said.

Just before 11 a.m., UBC tweeted that the fire on Trail 5 had been “contained and knocked down.”

“BC Wild Fire and Metro Van staff mopping up and will observe and monitor for flare ups,” the tweet read.

Fire at Trail 5 contained and knocked down. BC Wild Fire and Metro Van staff mopping up and will observe and monitor for flare ups. For info on wildfires and UBC: https://t.co/5bwvezHb85 pic.twitter.com/3ZDvROYqAs

Yesterday, Lytton, BC saw a record-high temperature of 47.9C, breaking a Canadian record. Vancouver has been seeing temperatures above 35C.

This is a developing story, and more information will be added as it comes available.