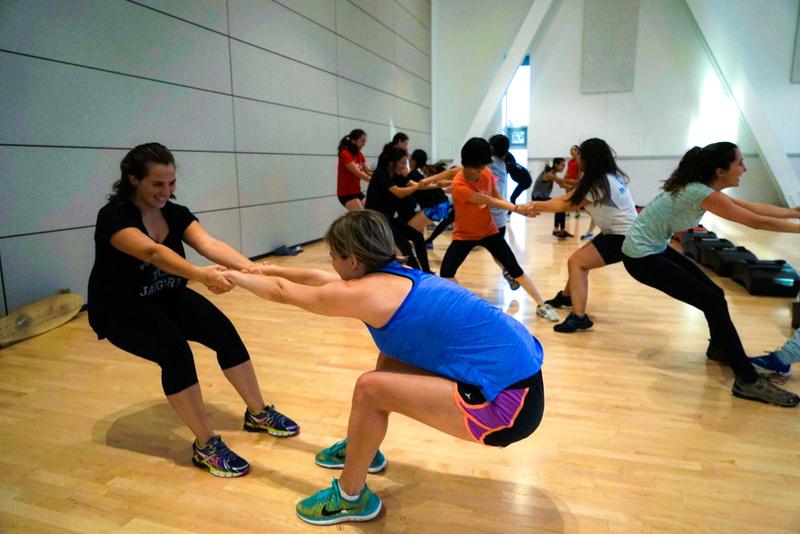 Women on campus are increasingly engaging with the self-defence options available to them at UBC.

A typical weekly women’s division class with the UBC Krav Maga and Advanced Self Defense Club sees the women learning how to free their arms from unwanted grips and practicing how to assertively say that no, they’re not interested in unsolicited attention. By the end, they escalate to simulating scenarios that involve throwing punches.

“The entire club is about creating a community and about showing girls that they have more power than they think,” said Paolina Buck, the captain of the women’s division and a second-year cognitive systems student.

The club, founded in 2015 by a group of first-year students, is one of several avenues for women on campus to learn practical self-defence.

“We heard about all the sexual assaults, and a group of us, we knew that we had the skills and the expertise to teach so we set up the club,” said Mohammad Iskandar, the club’s president and also an instructor.

“The most important skill is to be able to impart that mindset of how you switch from peace to war in an instant,” he said.

Viktoriya Fedorchuk, a master’s student in counselling psychology at UBC, tries to impart a similar message to women who attend the UBC Women’s Centre’s free monthly self-defence seminars. In addition to physical defense techniques, the seminars feature discussions on women’s experiences and the ways in which they can support each other.

“We are taught oftentimes to be nice people and be kind, accepting and tolerant. That doesn’t always have to apply — especially when we are put into uncomfortable and potentially dangerous situations,” said Fedorchuk, a black belt in Shotokan karate. “We can — we should — be able to access these more assertive and badass ways of being when we want to."

Both the Women’s Centre’s workshops and the Krav Maga Club train in practical self-defence techniques that are applicable to real-life situations, unlike other forms of competition-based martial arts.

The club practices defense in situations ranging from being grabbed or placed in a choke hold, to being held at gunpoint, taken hostage or sexually assaulted. Sometimes they practice with the lights off or using strobe lights to simulate a night club. They train in stairwells, elevators, corridors and even bathrooms, in order to learn solutions to dangerous situations in different environments, Iskandar explained.

It’s not all about physical defense tactics, said Chua, who also learned Krav Maga during his two years of mandatory military service in Singapore.

“We teach you how to observe the scenario, how to de-escalate a situation — only in the last resort, you use physical force to get out of the violent situation,” said Chua.

The club costs $50 to join — a fee which is spent on equipment and subsidies for level certifications according to Chua, and is at its full capacity at 130 members. Although it’s not accepting any new members at this time, Chua noted that exceptions can be made for vulnerable people at risk of violence.

Sometimes the only person you can expect to protect you from someone is you.

Ellen Brookes, a master’s student of political science at UBC, joined the club this year.

“I've been attacked before — a couple of times, actually. So I want to know how to stop it from happening,” she said of her motivation to join.

Although Brookes had previously trained in judo, she did not find it as useful for practical self-defence. The Krav Maga club has made her feel safer and also see her assault in a new way.

“Being attacked is something that just changes your perception of the world completely, it changes your perception of yourself. You go through a lot of emotions like, ‘Did I deserve that? Was there something I did wrong?’” she said. “In a way, [self-defence class] also helps you work through that … It helps you go through those issues and realize, this isn't about me. It's about someone trying to exert power over me and I can stop it now. So it helps you get your agency back in that regard.”

“Sometimes the only person you can expect to protect you from someone is you,” she said.

Emily Monaghan, events coordinator at the Women’s Centre, acknowledged that women’s self-defence is often criticized for suggesting that it is women’s responsibility to protect themselves, rather than addressing the perpetrators of violence.

“Obviously we believe that the responsibility shouldn't be on us,” said Monaghan, who teaches self-defence alongside Fedorchuk. “But these activities are empowering, and the world we live in isn't necessarily a world where men are able to be accountable and step up and hold each other accountable.”

“It wasn't anything complicated — it wasn't anything fancy. It was just becoming aware of tools that I already have and things that I can use in case of an emergency,” said Alison Gacad, a first-year science student who attended the class. “I learned how to combat people who came in close contact, who were threatening me from far away — a bunch of different situations.”

There will be more sessions coming up in Place Vanier and Walter Gage on October 28. Cate Morrison, assistant director Residence Life, said the classes are part of “regular programming” and will continue to take place in the future.

The role of UBC

Monaghan and Fedorchuk of Women’s Centre think UBC still has work to do on recognizing, acknowledging and holding itself accountable for the issue of violence against women on campus.

“The greater goal is to target [the systemic problem of violence] and not to say that one individual woman should change her behaviour to not be attacked,” said Fedorchuk. “We should be able to go to classes and go home and go to frat parties or whatever else without feeling unsafe.”

“I think it’s important that we hold the university accountable,” said Monaghan, who also volunteered as a sexual assault crisis counsellor for a year. “You can’t be telling us not to walk alone. The message needs to be directed at the perpetrators, not those who have violence acted upon them.”