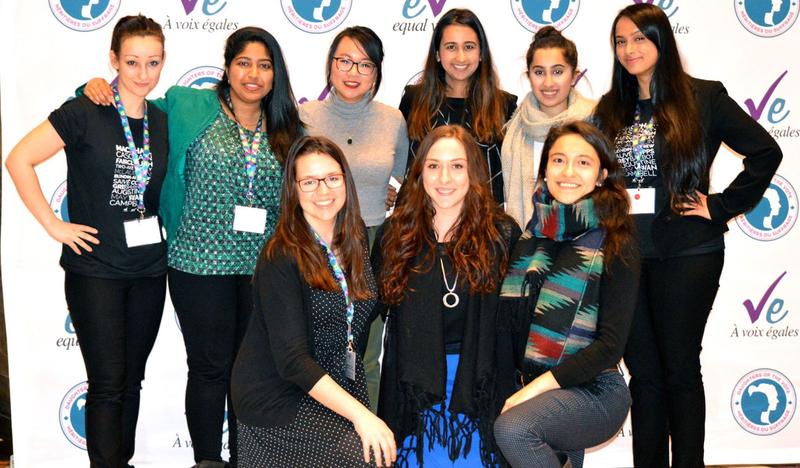 For International Women’s Day, 338 young women aged 18 to 23 sat in the House of Commons, each representing their own riding in Canada.

This “takeover” was part of a larger three-day event — four days for Indigenous delegates — called the “Daughters of the Vote” initiative. It was created by Equal Voice Canada, a multi-partisan organization founded in 2001 that advocates for increased female representation and involvement in Canadian politics.

This is the first time that an event like this has taken place and eight UBC students got to attend — Amy Ryder, Shakti Ramkumar, Helen Zhou, Sarah Saeed, Gunisha Kalra, Mustari Tumpa, Montana Cardina and Ashleigh Giffen (from UBC Okanagan).

Sarah Saeed, a third-year UBC student majoring in economics and political science, noted the evidence for its necessity.

“Before coming into this event, I didn’t really see myself wanting to go into politics or running as an MP, but I think it has really opened my eyes and made a career in politics a possibility,” said Saeed. “There have only been 314 women elected in the history of Canadian parliament and more representation is definitely needed — which is something that this event is attempting to do.”

The event itself began on Monday, March 6 with the Indigenous delegates, where they participated in an Indigenous forum which included group discussions and activities, including a speech from Minister of Indigenous Affairs Carolyn Bennett.

Montana Cardinal, a third-year law student from Bigstone Cree Nation in Alberta who is studying in the Peter A. Allard School of Law, spoke about the day further.

“We had PhD graduates and current MLAs come and sort of just share their experiences — not only in relation to politics, but also in their lives specifically — and just give us tips and sort of just tell us to work hard and to follow our dreams.”

The rest of the delegates arrived Tuesday morning and participated in a “policy issues day.” During this, they attended various forums, heard speeches from various people in politics and had roundtable discussions revolving around women’s equality and other important topics such as mental health and healthcare.

“The Indigenous delegates actually sang the ‘Strong Woman’ song as people were entering the House of Commons, so that in itself was super powerful and empowering,” said Ashleigh Giffen, a first-year undergraduate student at UBC Okanagan who is a part of the Kahkewistahaw nation, on their entrance into the House.

Giffen also spoke to how her experience entering the House may have differed from the others.

“It was pretty emotional because we were entering the most colonial building where treaties were made and broken,” she said. “It was a bit surreal to be there surrounded by my Indigenous sisters.”

Other delegates also found the experience to be emotional in different ways.

“The whole experience was very much an emotional thing because you’re surrounded by people who care very strongly about certain things and are very passionate about those things,” said Helen Zhou, a writer from The Ubyssey and a second-year UBC undergraduate student studying philosophy and political science. She also referred to the one-minute speeches that 30 of the delegates were selected to give. “One young woman talked about Islamophobia and the effects of it. Another talked about the rates of suicides in Inuit communities. Some talked about women in business and bilingualism. It was a very emotional experience to hear these passionate women speaking about these things that mattered to them.”

Saeed shared Zhou's sentiments regarding the speeches. “They were all so good, so well written and so powerful, and it was just amazing, feeling the energy in the room,” she said.

The final day consisted of “professional development and leadership workshops” in which the delegates were able to choose roundtables, forums and discussions that were relevant to their specific interests. These included environmental policy, international development or women in STEM.

A gala concluded the event and all 338 young women made their way home, with many of the UBC students holding similar impressions of the event — particularly in being able to meet a talented and diverse group of women.

“Diversity is a very important thing moving forward. I think that we have and we need to continue to move away from a single narrative of women,” said Zhou.

This article has been updated to correct the number of UBC students participating in the event.