Editorial: How The Ubyssey is reporting on the climate crisis

Written by Ubyssey Editorial Board
Oct. 2, 2019 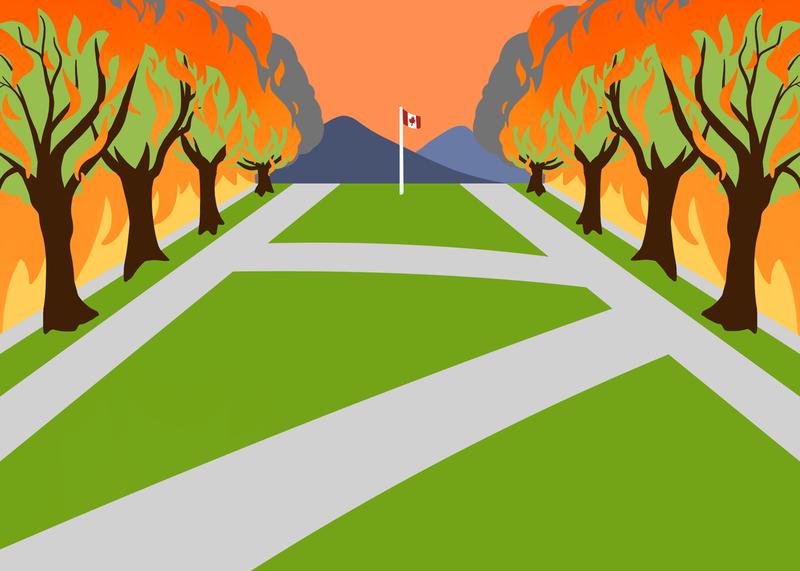 In short, the climate crisis is here. Daphinie Situ

Pawan Minhas remembers feeling “alienated” the first time he stepped back into his childhood home in December 2016.

Seven months earlier, Minhas — a fourth-year political science student and The Ubyssey’s features editor — and his family had all piled into a small SUV and fled the infamous Fort McMurray wildfire. While most likely human-caused, the fire also got its fuel from conditions linked to the climate crisis. Over days, it would grow to force over 80,000 people across northern Alberta to evacuate and prompt the provincial government to declare a state of emergency.

Thankfully, Minhas’s home was not as badly damaged as he had thought, despite it being situated in one of the hardest-hit communities.

Walking into the house, he stumbled first into a concrete wall of smell from the food left behind during the evacuation, now rotting in the fridge and freezer. In his room, his old bed and computer were where he had left them, but now they couldn’t be used because of health risks. His high school graduation suit was still hung neatly in the closet, untouched and unworn.

He recalled the complex wave of emotions, some joy and relief, others more confusing.

“It was so unfamiliar and I’ve lived there for 12 years and I didn’t think alienated would be one of [my emotions],” he said.

His family members were similarly confused.

“On a mental level, my mom understood,” he said. “But like in the raw, primal emotion, she was like, ‘I am back in my house for the first time in seven months — just let me lie in my bed, let me pick up my clothes, let me look at my wedding dress,’ and she couldn’t.”

Three years later, much of the confusion still stuck with Minhas as he recalled the story in the Ubyssey corner office, a space he described as being the same size as the first evacuee room his entire family of seven stayed in after leaving Fort McMurray.

But what is clear as we continued our conversation is that extreme weather events — and the resulting tangible and emotional impacts to humans, including UBC community members — are becoming more common and more amplified by the climate crisis.

In turn, The Ubyssey is ramping up our effort to give the climate crisis the urgent and accurate coverage it deserves.

It’s hard to miss the effects of the climate crisis.

In summer 2017, BC declared its longest state of emergency of 70 days over wildfires, which forced around 65,000 people to be evacuated and cost over $649 million to stop. Besides the fires themselves, the smoke clouds also created terrible air quality that created multiple health concerns.

“This is an exceptional year, but we’re going to have more and more years that are exceptional compared to the past,” Dr. Sally Aitken, a professor and the associate dean of research and innovation in UBC’s faculty of forestry, told The Ubyssey in 2017.

“… We expect these types of fires to be increasing as a result of climate change. That would be a fair statement, not attributing this one event — although I think that is in fact what’s driving it, our exceptionally warm Junes.”

In summer 2018, the province once again faced a high number of wildfires and health concerns from wildfire smoke. As a result, despite a shorter state of emergency, this wildfire season still led BC Premier John Horgan to warn that these conditions could be “the new normal.”

And while summer 2019 didn’t see a raging wildfire season, this is likely going to be an anomaly instead of the norm and there are already predictions of “bigger, hotter and more dangerous” wildfires.

But extreme weather events like wildfires aren’t the only things whose impacts will be amplified by the climate crisis.

There will also be risks to Canada’s physical infrastructure across the country and particularly in coastal and Northern communities, threats to biodiversity and fish stock as well as major physical and mental health impacts for humans. The country as a whole is also “warming up twice as fast as the rest of the world.”

Globally, Europe saw an intense heatwave this summer that broke several temperature records across different countries. In areas with more severe disruptions, extreme weather events linked to the climate crisis have driven people from their homes, fuelling internal displacement. Most critically, many small island nations may face the loss of their homes entirely to rising sea level.

In short, the climate crisis is here.

Our role in the collective action

But there is still hope.

The 2018 UN Intergovernmental Panel on Climate Change report called for urgent climate actions within the next 12 years to stop global warming from going beyond 1.5 degrees Celsius above pre-industrial level. Created by 91 authors and editors, the report notes that this goal — rather than letting the warming hits 2 degrees Celsius — would still allow for a “sustainable and equitable society.”

What does this mean for The Ubyssey as a newspaper whose job is not to only tell the truth but also to hold power to account?

Firstly, we have already moved from using “climate change” to “climate crisis” or “climate emergency” to reflect the urgency of the issue.

We will also continue to not tolerate false balance or give space to climate deniers in our coverage, given the staggering consensus within the scientific community about the existence of the climate crisis.

At the same time, we have been consistently covering major developments and events related to the climate crisis, such as the climate strike, the AMS’s decision to divest its investment portfolio and UBC’s decision not to divest.

But moving forward, The Ubyssey strives to have an even more robust coverage of the issue.

We will bring more intersectionality into our coverage, as impoverished communities and Indigenous peoples will face the climate crisis’s hardest hits. We will continue to localize our climate reporting by delving deeper into campus developments and extreme weather events affecting our community. We will branch out to other student newspapers in Canada — some of whom are already contributing to the effort — to collaborate and collectively hold power accountable.

Perhaps most tangibly in the near future, we will feature the climate crisis as a critical topic within our federal election coverage, providing explainers, fact-checking and showcasing the community engagement with the issue.

Before we end, we would like to acknowledge that some students could only afford their UBC education because of their or their family’s direct or indirect work in extractive industries. As we talk about the climate crisis, it should be less about exclusionary approaches and more about transformative and collaborative solutions.

Ultimately, the climate crisis is a collective issue and The Ubyssey is proud to be part of the collective response to it.