Last Words: AMS Elections post implies that the AMS revived The Ubyssey. Did it? 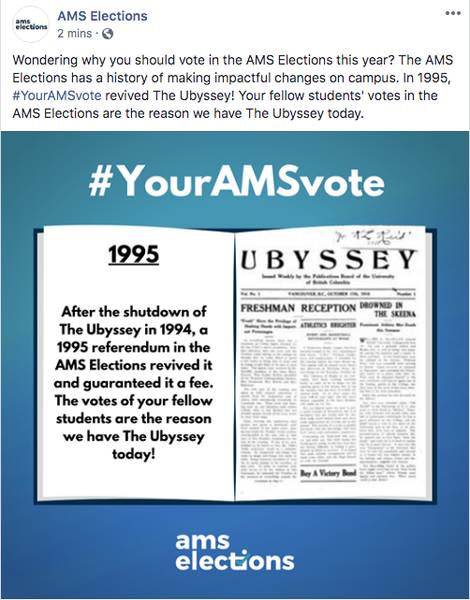 After 76 years of publishing under the AMS, The Ubyssey was shut down... by the AMS. Screenshot AMS Elections Facebook

In a recent advertisement posted by AMS Elections, it makes it seem like an AMS referendum helped revive The Ubyssey in 1995.

While this is correct, this post mischaracterizes and minimizes the fact that the AMS was the reason why The Ubyssey was shut down and the work that the 1994/95 editorial had to do to ensure that there was going to be an independent Ubyssey.

After 76 years of publishing under the AMS, The Ubyssey was shut down... by the AMS.

You may think that the AMS and The Ubyssey might be on rocky relations now, things were way worse between us in the past. After The Ubyssey published some admittedly ethically-unsound material in the mid ’90s and other instances of the AMS wanting less criticism, the student society took steps to gain more control on the paper. In 1994, AMS Council changed The Ubyssey’s constitution to allow the student union to directly appoint the editor-in-chief, who would then pick the other editors.

After the staff refused to work with the new editors, the paper was forced to shut down and the locks to the office were changed. The work to restart the paper came from within the paper, with the fired editors and staff leading the campaign to bring the free press back. The group created the Ubyssey Publications Society, which pushed to have a referendum question on whether or not to bring back The Ubyssey, but this time as an autonomous entity supported by student opt-in fees. With nearly 5,500 students voting, the referendum passed with 67 per cent in favour.

The AMS Elections post obviously can’t include this whole story, but the implication that The Ubyssey was gifted its existence from the AMS is easy to glean from it.

Ahsan Sahibzada, the chief electoral officer for AMS Elections, said in an emailed statement that the post’s intention was not for the AMS or AMS elections to take credit for reviving The Ubyssey, but to highlight “ the power students have when they get out and vote,”

“[W]e used the Ubyssey shut-down as an example of that power. Whatever the circumstances were surrounding the shut-down it was students voting to bring the paper back that ensured it’s [sic] revival.”

Voting power did bring The Ubyssey back, but it was ultimately the unpaid labour of the 1994/95 editorial that ensured it made its way onto the referendum ballot.