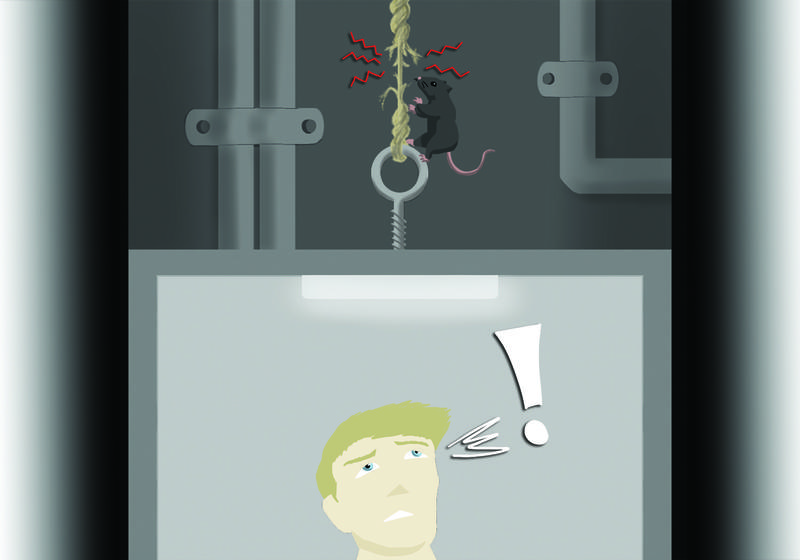 Things are dire in Ponderosa.

“What can I say?” asked Andrew Parr, Managing Director of Student Housing and Hospitality Services. After acknowledging that workers failed to follow safety protocol, an elevator in the brand new Ponderosa Commons free fell.

A lot more than that!

Student Housing and elevator company officials seemed rather unfazed by the students injured by falling elevators. In the words of the Kone elevator spokesman Patrick O'Connell, the students were not “free falling,” but just “feel[ing] the sensation of coming down” or "calibrat[ing]." This is the same person who insisted that the effect was "very rare and almost never happens."

The simple reality is that with Student Housing charging students exorbitant rates to live on campus and passing other residence construction costs onto the rest of the university, there is no excuse for something as crucial as an elevator behaving in such an unsafe manner. Even if living costs were anywhere near reasonable, one would expect basic safety measures to be in place.

That fact that UBC has such a cavalier attitude toward nightmarish scenarios described in this week’s cover story is somewhere between discouraging and downright frightening.

Come one, come all

Med schools around the world are moving away from only accepting students who have suffered through organic chemistry and physiology and are now accepting students of all backgrounds. No longer are medical students expected to learn the entirety of medical knowledge in their first two years and then start clinical training.

What top schools like the University of Michigan and the University of California are doing is teaching communication, teamwork and problem-solving rather than rote memorization. UBC is considering doing the same and we're on board.

Science prerequisites should be done away with to allow students from more diverse backgrounds, schools and interests to become doctors. Organic chemistry professors may get a bit lonely without med school hopefuls to torture, but they’ll survive.

Free beer has been showing up around campus surrounding football games and it's doing a hell of a job getting people stoked on the Thunderbirds.

Homecoming saw a record-breaking attendance of almost 7,000 while 2,500 fans showed up to the Thunderbird’s loss to Saskatchewan last weekend. Those are bigger numbers than UBC football has seen in a while and the free beer is certainly playing a part in drawing a crowd — arguably a very large part. But it’s sort of strange, isn’t it? Is supplying a bunch of booze really a sustainable way to develop dedicated fans?

Some rich person buying university kids free beer so that they go to football games made a few of us initially uneasy. But honestly, who cares? If they’re buying, let’s be realistic — we’re drinking.