Written by Elias Rieger
Nov. 16, 2020
“But now that we are talking about real actions, not just declarations, there is uncertainty about whether the CEAP will have city council’s support.” Ruth Hartnup/Flickr

In January 2019, Vancouver City Council voted unanimously to declare a climate emergency. Under pressure from grassroots organizers, every single councillor acknowledged that we are in a crisis deserving immediate attention.

Almost two years later, staff have come back with the Climate Emergency Action Plan (CEAP) — a 371-page document with 19 concrete actions that we could take to reduce our emissions as a city. If approved, this would be one of the most ambitious plans to address the climate crisis in all of North America.

The CEAP includes plans to expand our transit system, build more bike lanes and widen sidewalks to make it easier for people to get around without a car. It will pave the way for more electric vehicles and force developers to build more energy-efficient buildings. These are just a handful of the proposed actions.

But now that we are talking about real actions, not just declarations, there is uncertainty about whether the CEAP will have city council’s support. While we can count on a few yeses from folks like Councillor Christine Boyle and Mayor Kennedy Stewart, we can’t be sure that it will pass.

Take Councillor De Genova for example. Soon after the CEAP was released, she started tweeting inflammatory posts targeting the plan. She used scare tactics to indicate that it would harm low-income residents, when in reality, one of the main focuses of the plan is to facilitate a just and equal transition.

Meanwhile, the local media has largely focused on the concerns of a few loud business interests, like the Canadian Taxpayers Federation and the Downtown Vancouver Business Improvement Association. They argue that making it more difficult and expensive to use gas-powered cars will hurt our city’s economy.

Pete Fry, a councillor for the Green Party, was quick to call these business groups out during a public council meeting, noting that their own vision documents emphasize the importance of reducing emissions. Furthermore, Fry criticized the use of misinformation by Kris Sims of the Canadian Taxpayers Federation. In a fundraising email, Sims wrote that if the CEAP passes, people would have to pay $14 to enter downtown; there's nothing of the sort in the motion. 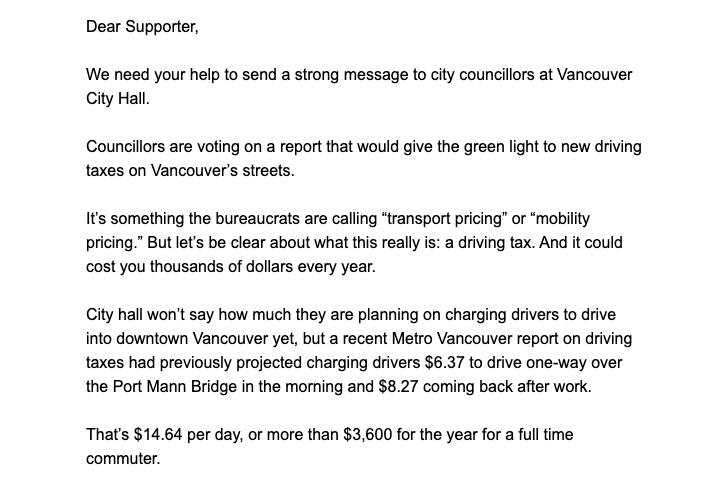 The bottom line is this: taking care of our planet isn’t free. If we truly want to save our climate from catastrophic temperature changes, we need to be willing to pay the price. We need to be open to making changes in the way we get around our city. We need to shut out the voices of powerful business groups who are telling us to keep taxes low. If we aren’t able to do these things, we as a species will pay the ultimate price.

Vancouver City Council will vote on whether to approve the actions in the CEAP on November 17. You can show your support by writing a letter telling city councillors that they should approve the plan. No matter how “green” politicians may claim to be, they can’t say they support climate action unless they are willing to put their vote where their mouth is.

Elias Rieger is a third-year economics and urban studies major. He is also a volunteer for Abundant Transit BC. The opinions expressed are solely his own.