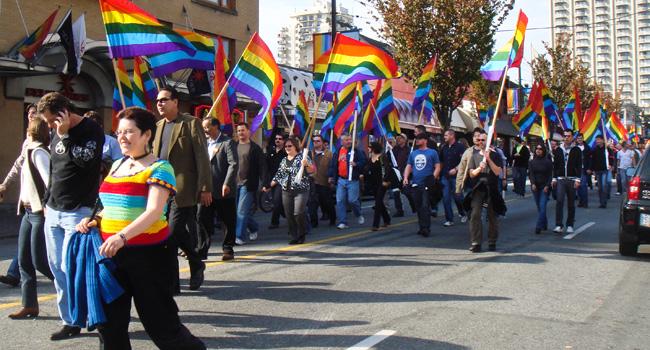 “I started looking at this decision through a different lens.” File The Ubyssey

I was sent a news clip, by text, on July 8 and was quickly outraged as the Vancouver Pride Society (VPS) banned UBC from participating in this years Pride Parade “due to transphobic speaker.”

It just so happened I was across the street from the VPS office. I entered the office and mentioned to Executive Director Andrea Arnot that Two-Spirits and First Nations should be exempt from this decision, as we have been fighting for inclusion on various levels at UBC. I was then told that we were allowed to march but with no UBC or AMS signage. I then informed Arnot that I had a banner for an AMS Club I am working on and a banner with the words “AMS 2Spirit/Idol No More UBC.” I was allowed to march as long as the words were covered. I left after agreeing.

But, on the way home, I started looking at this decision through a different lens.

With the recent release of the Murdered and Missing Women & Girls Final Report on June 3, the following words entered Canadian society: “The truth is that we live in a country whose laws and institutions perpetuate violations of basic human and Indigenous rights. These violations amount to nothing less than the deliberate, often covert campaign of genocide against Indigenous women, girls, and 2SLGBTQQIA people. This is not what Canada is supposed to be about; it is not what it purports to stand for.”

The report confirmed that the ruling parties, both federal and provincial, have policies that amount to genocide — yet they are allowed to march. Dr. Hedy Fry has been a member of parliament (MP) for 26 years, making her the longest serving female MP. But she and Minister of Crown-Indigenous Relations Dr. Carolyn Bennett are members of a party whose leader, Prime Minister Justin Trudeau, has had to apologize for disrespecting protestors from Grassy Narrows, a place where “experts in mercury poisoning report that 90 per cent of the population of Grassy Narrows and Wabaseemoong First Nations show signs of exposure to the toxin, including people born years after the dumping of mercury ended.”

“I will prevent disease whenever I can, for prevention is preferable to cure.” Have Fry and Bennett's party broken this modern version of the Hippocratic Oath?

Canada is in a fragile place right now, as genocide and its affects affect each one of us. Like many First Nations, I woke up early on June 3 and heard these words from Commissioner Michèle Audette: “We need to change right now ... we are not comfortable with this word ... but to be honest, do you want to stay in that uncomfortable zone? or do you want to be a proactive person, a change maker?”

As a 50-year-old First Nations, who lived with HIV for 26 years, who is Two-Spirit, who was homeless and who has been clear of Hepatitis C for five years, I — for the first time in my life — felt that I was heard, accepted and honoured for being Two-Spirit. Yes, my family and friends treated me this way as well, but this time, it was spoken on national TV that being 2SLGBTQIA+ was something worth living for and advocating for change where needed. I felt so happy that I woke family and friends at 5:30 a.m. to listen along with me here in Vancouver and at my home on the Piikani Nation. There are no speeches like this given by political leaders today.

Yet, for almost 40 years, I have seen negative actions and non-action by political leaders that still deny, through policy and laws, First Nations communities a chance at a real future. These policies affect Two-Spirits in such a negative way, some turn to addictions, some sadly make wrong decisions, some take their own lives and then there are those who are brutally murdered, like my best friend and cousin, without justice.

It is my view that policies and laws by politicians who have never lived the lives we live are putting First Nations, Inuit and Metis youth at risk, on and off reserve.

The theme of this year’s Pride parade is “50 years and still fighting” — we, as Two-Spirits, have been fighting for over 152 years. We have stood side by side with the LGBTQ+ community to fight for equality.

Will you write the VPS and ask that politicians be disinvited to participate?

Maistoo'awaastaan (Crow Flag), also know as Rodney Little Mustache, is a third-year Gender, Race, and Social Justice student from the Piikani Nation of the Niitsitapi Confederacy. The opinions expressed are solely his own.