Letter: What not to expect from the Senate 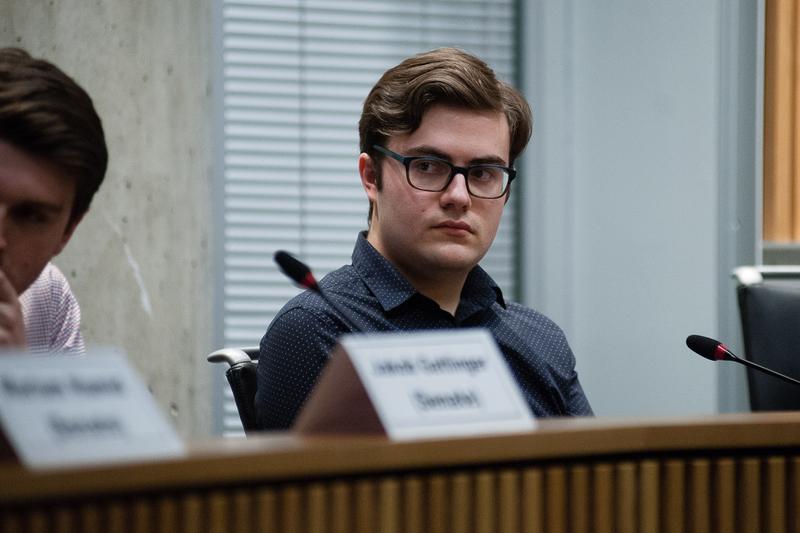 Max Holmes in the Kingsmill Forum during a debate, February 27 2018. Patrick Gillin

Relate to Senate is an opportunity to let students know what is happening monthly at the UBC Senate, the highest academic body of the university that oversees academic policy, appointments, awards and admissions. This month, however, the Senate meeting was cancelled “due to a lack of sufficient business,” and we want to address why that is.

The lack of “sufficient business” was cited for a lack of work completed in Senate Committees since the last Senate meeting. There are 12 standing committees and a newly minted ad hoc committee that work in between Senate meetings on various topics. We were surprised that none of these groups completed sufficient work to be discussed by Senate as a whole. In fact, in response to the cancellation of the Senate meeting, several committees cancelled their regular meetings — which seems counterintuitive to the rationale provided.

When you hear about the Senate you might imagine the 87 students, faculties and deans of the Senate working with a horde of support staff to review policies or approve awards. But that is not how it works at all, currently. The Senate is massively under-resourced and the burden falls to a small number of part-time graduate student support staff and volunteer committee chairs, most of whom are also serving as active faculty members. To be clear, the Senate is indebted to these support staff and committee chairs for their dedication, but in a university with more than 7,000 staff members, 15,000 faculty and 50,000 students, it is inane that UBC has less staff hours for academic governance than for a single food outlet. Perhaps if we put more resources into the Senate, committees would be able to accomplish more and would not have to cancel meetings due to “a lack of sufficient business.”

There are good reasons for the Senate to be slow from time to time — we are wholeheartedly supportive of being deliberate about discussions and ensuring that we do our due diligence before making decisions. But cancelling a meeting when there is an abundance of work is simply negligent. The Senate only meets for about 20 hours a year. It should alarm the UBC academic community that the body responsible for developing policy and strategy met for fewer than 20 hours this year and yet came to the conclusion this month that that was too much.

It is probably unnecessary to remind you that there are an uncountable number of things that the Senate could be working on — like working on a Fall Reading Break, providing feedback on UBC’s Indigenous Strategic Plan, or UBC’s Sexual Assault, and the other Sexual Misconduct Policy that has yet to be implemented in Senate policy more than a year later.

Your student senators recently published a collection of goals to accomplish entitled “Senate 2020.” One of the goals outlined is the need for Senate governance review — and this is yet another sign that something within our Senate simply isn’t working.

We understand it is easy not to care about the Senate, that it seems big and bureaucratic and hard to understand. But until we begin to see a change in how we operate our Senate, the changes we all want as students will continue to move at a snail’s pace.

Every election, a new cohort of students promises to keep students informed about what the Senate is actually doing. And as your democratically elected incoming and outgoing elected representatives, it is our responsibility to do the same. Increasingly, however, the answer to that question seems to be “not much.”

Kevin Doering is a current senator and co-chair of the Student Senate Caucus.

Marium Hamid is a current senator and co-chair of the Student Senate Caucus.

Max Holmes is a current senator and the AMS VP Academic and University Affairs.