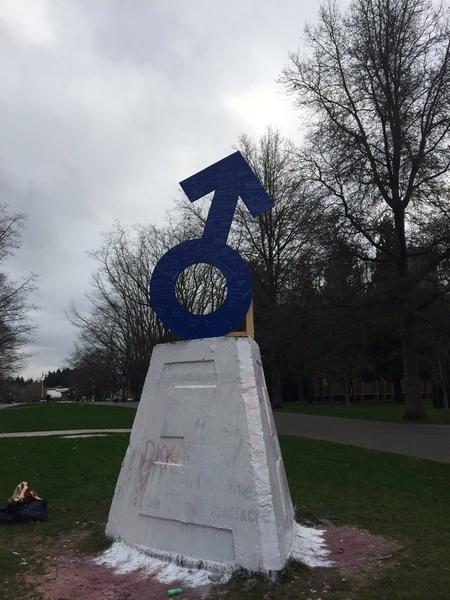 The male symbol was put on top of the cairn to show support from the UBC Free Speech Club for the creation of a new AMS club. Courtesy @adrianaaustin96 via Twitter

This week, a male symbol appeared on top of the UBC Engineering cairn one day before our annual 14 Not Forgotten Memorial Ceremony. We don’t know the goal, the club or their message, but we do know how it made us feel.

To many of our friends, it was a visceral, gut wrenching reminder — “Oh right. Engineering is for men.” Some had worse reactions, some had better, but for the three of us, it was time to speak up.

We commented back — our opinions, our feelings, our actions. Why? Because the three of us are student leaders who have been involved for years in combating any association that suggests women can’t be engineers. We dedicate our lives to inspiring future female engineers, and work to make every engineer feel welcome and respected.

In summary, we were impassioned, we were enraged — we wanted to shout from the rooftops. We wanted to explain the importance of diversity, the systemic issues that convince women not to pursue this profession, the goals our dean has set and the engineering community we dream of.

The responses weren’t all positive. People challenged our association with the memorial, our opinion and our “overreaction.” Countless comments, shares and likes later, we’d sparked a debate.

And let’s be honest, we suspect the Free Speech Club put their sign on the cairn because it’s an easy to reach, prominent place on campus. They probably didn’t consider the symbolism or feelings it could evoke.

But those feelings were evoked all the same. Sometimes ignorance and intention can hurt equally. So we ask that before acting, take a moment to consider how your actions could affect others.

This has given us a chance to remind the entire UBC community that equality is still something that needs to be fought for. And today, November 30 at 11 a.m. in the EDC courtyard, we will spend time remembering 14 women who lost their lives because of the shooter's statement: “Vous êtes des femmes, vous allez devenir des ingénieures. Vous n'êtes toutes qu'un tas de féministes, je hais les féministes.” | “You’re women, you’re going to be engineers. You’re all a bunch of feminists. I hate feminists.”

We hope to see you today.

Writer's Note: In further reporting, it became evident that the symbol was to speak in support of creation of a new AMS club. None of the reporting however, addressed why the symbol was left on the cairn.

Veronica Knott is a current mining engineering student. She is a student member on the UBC Board of Governors, former EUS president and former chair of the National Conference on Women in Engineering.

Jeanie Malone is a current biomedical engineering student. She is president of the UBC EUS, former VP Communications and former director of Geering Up, the youth STEM outreach program for the faculty of applied science.

Carly Jones is a current engineering physics student. She was president of Alpha Omega Epsilon Eta Chapter, the engineering sorority at UBC. She conducts ground-breaking research in biomedical engineering for hip mobility and she has been instrumental in organizing UBC's December 6 events for the past two years.