Op-Ed: The federal debate and recognizing the power of young voters 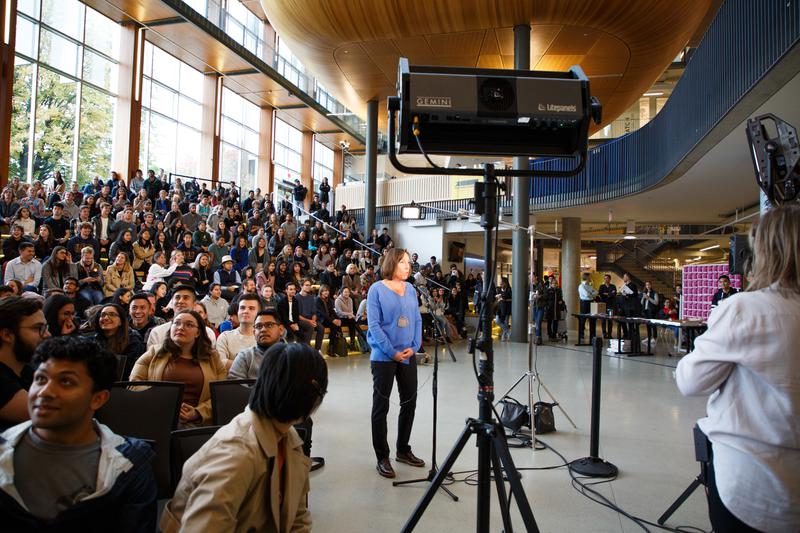 “I was dismayed and disappointed.“ Courtesy the AMS

At the AMS’s live watch party on Monday for the English-language federal leadership debate, the Nest’s Lower Atrium filled up quickly. People were interested, way more interested than I had expected, and the sight of the full space made me feel a little more hopeful about youth voter turnout in the upcoming election.

Halfway through the debate, however, my excitement pulled up short when debate moderator Althia Raj from HuffPost Canada introduced the next “question from a Canadian” and the screen cut to a familiar scene: The Nest’s grand wooden steps, with a middle-aged and seemingly white-presenting woman standing in front of the gathered students. I looked over and saw her standing in front of a Global TV camera, asking a question that was relayed to the federal leaders live.

I was dismayed and disappointed. This campus is filled with students who care about the election and who have been talking about it for weeks, if not months or years. I recently spent two weeks writing a story for The Ubyssey and I talked to many UBC students who spoke passionately about the issues they care about, from the climate crisis to affordability to housing justice.

There are students marching at the front of climate strikes, advocating for social justice and pushing our government to do better. Why are their voices not being broadcast onto that stage?

This question that was asked amongst us — in the middle of the passion and energy of the students on this campus — was not asked by a student or a young person. As a result, it was not centred around any of the issues that we care about.

This year, for the first time, voters aged 18 to 38 will make up the largest voting bloc as 37 per cent of the Canadian electorate. From looking around the Lower Atrium alone, I could see how much people cared about the election, enough to stop and watch this debate or even skipped class for it like I did. We care — and we care because we have to. The IPCC reported that we have 11 years left to act on the climate crisis and our future prospects when it comes to adult things like jobs and home ownership are bleak.

This election will have a huge impact on the lives of young Canadians and we’re tuning in. But it feels like federal politics is tuning us out.

I’m a woman of colour and on Monday night, I worried that it will be decades before I see someone who looks like me on the debate stage. Watching a middle-aged white woman ask a question in front of a group as diverse as a crowd of UBC students also hurt because I don’t want to feel any more excluded from — and disillusioned with — the political process than I already do.

It’s time for the federal parties, the Federal Commission and whoever the hell organized this debate to wake up to the fact that young people are here and ready to use our votes. Fifty-seven per cent of voters age 18 to 24 voted in the 2015 election and the stakes are even higher for us now. If we aren’t given the opportunity to bring up the issues we care about, we’ll make our own opportunities, through voting, exercising our political power beyond heading to the polls, organizing protests and calling on our leaders to do better.

The Canada these leaders are vying to win over is our Canada now and it will be our Canada long after they’re gone. We have more power than anyone knows.

Sarah Zhao is a second-year arts student and staff member of The Ubyssey.