Op-ed: In response to "Why I'm not voting" 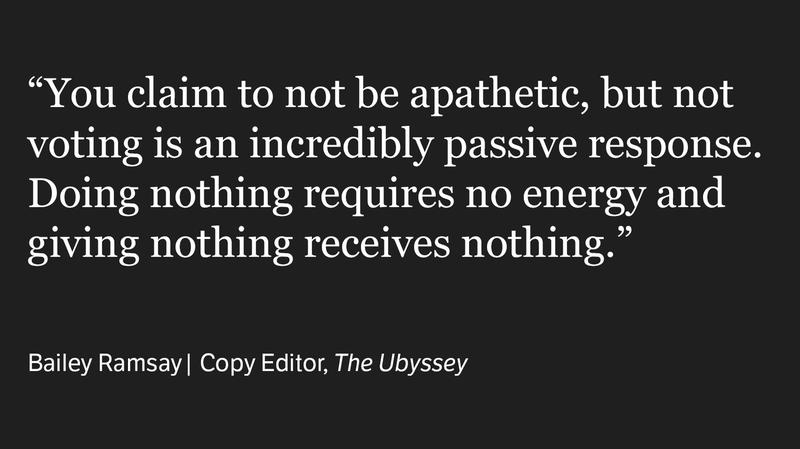 This op-ed is in response to “Letter: Why I’m not voting” by Jastej Luddu.

In your letter, you condescendingly state: “if you think the system works fine, then enjoy the thrill of filling out a ballot.”

Canadians are visibly upset by the state of their government and unhappy with the system — that I can agree with. However, strategic voting is a way to fix it.

If you were as informed as you say, perhaps you’d realize that all parties have expressed serious support for reforming the electoral system and parting ways with first-past-the-post — of course, all the parties with the exception of the Conservatives.

You claim to not be apathetic, but not voting is an incredibly passive response. Doing nothing requires no energy and giving nothing receives nothing.

You claim that Canada has a simple solution: “It sounds like a dream, but all it requires is that people stop pretending democracy works in this country.”

Yes, a dream is exactly what that sounds like — a dream in which you can lay in your bed with your eyes closed and blindly hope that your collective passivity will achieve something. It won’t. If we want to change the system, we need to figure out how to change it from within. If nobody voted, governments would steam ahead unopposed while Canadians watched. Walking away from something that frustrates you is easy; challenging politicians at their own game is hard.

You complain about the substance of various political platforms: “Take a look at the issues that have dominated this election season: the niqab, Bill C-51 and Justin Trudeau’s hair. The politics are of fear, misinformation and superficiality reign supreme.”

Please note that all three of the issues you listed are part of the Conservative Party’s fear-mongering platform. These dirty political tactics are exactly why we must collectively conquer this current government in order to alleviate these issues in the future.

If you are unhappy with your current government, passivity won’t achieve anything but more inequality.

Bailey Ramsay is a fourth-year English Literature major and copy editor at The Ubyssey.