Last Words: Apologizing on behalf of whoever defaced the Cairn 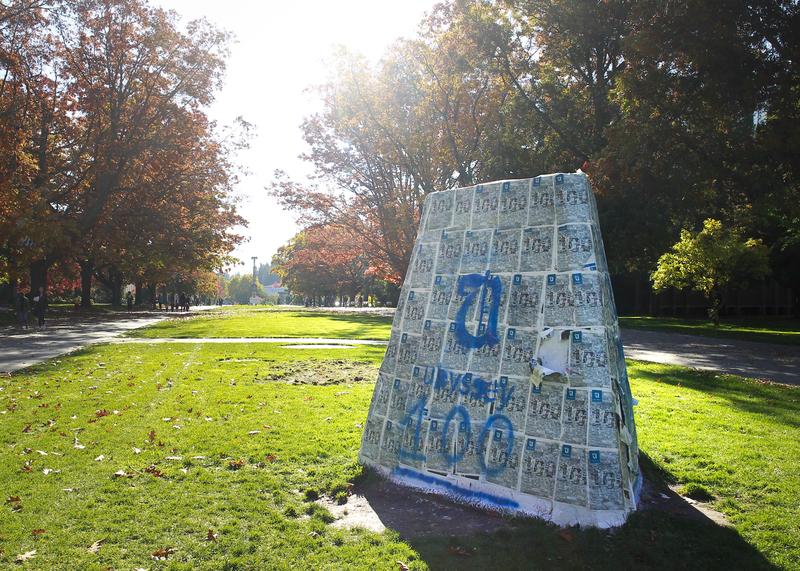 A “dingbat,” for those who don't know. Elizabeth Wang

Defacing the Cairn is a rite of passage for many campus groups. The faculty of forestry plants trees around it, promoters paste their event details onto its three faces and UBC Improv proves they can draw with comical doodles over the infamous “E.”

Last week, UBC awoke to a papier-mâche covered Cairn. Given how sturdily hundreds of copies of The Ubyssey’s centennial issue were pasted onto the campus icon, whomever did it is probably really, really sorry for the work they created for that poor EUS first-year charged with cleaning it up.

When we walked by the Cairn the morning of October 17, the mâche had dried solidly and formed an impenetrable shell of journalistic integrity. The blue spray paint that spelled out our logo and “100” was an extremely subtle nod to the 100 years of Ubyssey history that October 17 marked, and it hadn’t faded one bit in the many, many hours since the vandals finished up and celebrated at a westside McDonald’s the evening before. Although, that was also the day cannabis was legalized in Canada, so who’s to say what the vandals were truly celebrating?

Even if the engineers haven’t found the Ubyssey “U” — a “dingbat,” for those who don't know — spray-painted under the papers, they should know that whoever is responsible is probably really, really remorseful.

The perpetrators, although we don't know them or their motives, most likely regret that they pre-taped rows of old Ubyssey issues together, attached them firmly to the Cairn with copious amounts of packing tape, and then pasted on another layer of the centennial issue for good measure.

The Okanagan peach cider they were drinking probably doesn’t sit well in their stomachs knowing the ruckus they’ve caused.

It must have taken a long time to get all the paper and tape sorted, buy the spray paint, make a dingbat stencil, and actually pull this amazing centennial prank off — so even if they’re not sorry, the sleep deprivation will have certainly taught the hooligans who did this a lesson.

On top of that, thinking of all the paper wasted, frankly, makes us sick, and it probably makes whoever committed this blatant act of vandalism just as ill. We can’t imagine how wracked with guilt they must be. Whoever they are.

Trust us when we say it will take several hours for the glue to dry enough for them to pick it off their hands — we’ve done our research.