Op-Ed: A queer take on the UBC Pride Installation 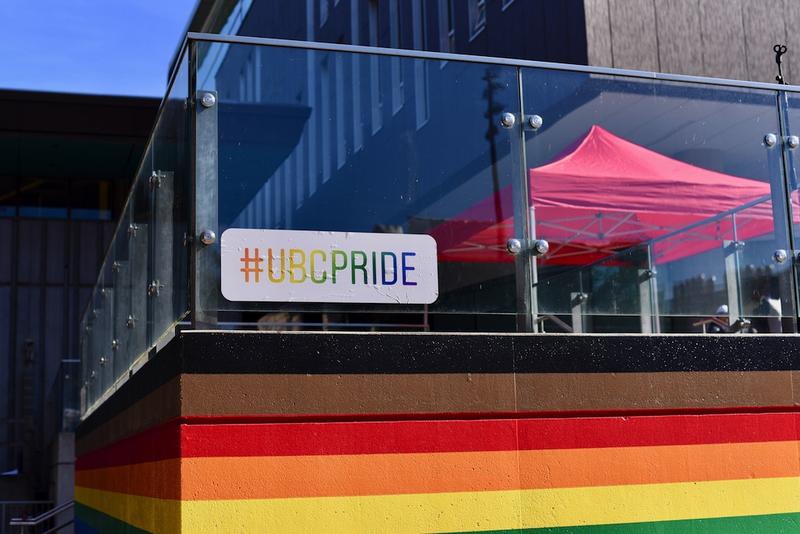 "Equity consulted the UBC Pride Collective about what the queer community would like to see in a permanent art installation on campus." Elizabeth Wang

The first time I saw the UBC Pride Installation, I sat down on a bench and started to cry. As an American trans dude, I’d never seen the transgender flag up in a public place apart from smaller flags being carried or waved in Pride parades. But here it was at my new university, right outside The Nest where everyone could see. I was both overjoyed and relieved.

However, the reality behind the UBC Pride Installation is a little more complicated than that. In a press release, UBC Equity and Inclusion called the installation “a symbol of the university’s commitment to welcoming the LGBT2SQIA+ community.” But how much of a symbol was it, really?

“Theoretically, we at Pride would like to support [UBC] Equity,” said Pride volunteer Shoshana Messinger. “But historically, they haven’t given our opinion the gravity that I think [it] merits. Especially considering we’re the only funded group on campus that is run by queer people for queer people.”

Eight months before the installation was approved, Equity consulted the UBC Pride Collective about what the queer community would like to see in a permanent art installation on campus. Over the course of four to five meetings, Pride gave a variety of suggestions such as hiring a queer artist to design the mural, hiring queer people to paint, or not painting the flags at all and instead using the installation money to help queer students.

In the end, only two of Pride’s suggestions were incorporated into the final design: the addition of black and brown stripes – colours that symbolize queer people of colour that have been historically excluded from Pride celebrations – as well as a different name. But getting those changes wasn’t easy.

“Initially, we reached out to Equity [about the name] and our email wasn’t replied to,” Messinger said. Only after Pride shared their concerns publicly via The Ubyssey did Equity change the name.

Messinger also noted that the black and brown stripes were only added to the design after Equity faced criticism for the installation’s name. “When they released the [poll] results to us, they were going to go ahead with painting the steps the pride flag without the black or brown stripes,” she said. “And paint the pillar the trans flag.”

But when Equity put the rainbow flag and the trans flag together, they ran out of steps and moved to a nearby wall. Only then did they add the black and brown stripes.

The Pride Collective’s frustration with Equity didn’t begin and end with the UBC Pride Installation.

Over the summer, Equity called for transgender people to read scripts for a university video, written by a UBC PhD student. Pride’s request to review the scripts was never responded to. The Pride Collective wasn’t even initially informed of the UBC Pride festival held in early August 2018.

For other events, such as the Jumpstart “LGBT Pizza Social,” Pride was invited — but only to table at the event.

“[Equity] could have had an event [run] by Pride put on the Jumpstart calendar,” said Messinger. “This is just another thing where [Equity] is doing things for the queer community and they get us to come so it looks like we’re working together.”

Equity and Inclusion, on the other hand, doesn't seem to see any issues with the relationship.

“We continue to reach out to members of The Pride Collective to encourage them to connect with us and identify how we can support them through other initiatives and resources,” said Sara-Jane Finlay, associate vice president, equity and inclusion in a written statement to The Ubyssey.

Finlay listed the annual pride flag-raising, the Transgender Day of Remembrance event, the the Get Connected movie screening for queer & trans students, the Pride installation, UBC Pride and the Jump Start Get Connected Pizza Party as “successful” collaborations.

“The UBC Equity & Inclusion Office recognizes the important role The Pride Collective plays in the campus community and regularly seeks to engage it on initiatives of shared value and interest,” she wrote.

These sound like small mistakes — a missed email, some suggestions overlooked, ambitious projects that couldn’t be finished on deadline — and can be passed off as accidental and well-meaning.

Back at my old university, I used to keep count of how many cis men in the bathroom would blink or look confused when they saw me. I would joke about it with other trans people, because joking was the easiest way to deal with the knowledge that for a lot of trans people, that confusion could at any point become violence. But insofar as I called them “jokes,” I can still remember each time it happened.

This is to say that small mistakes do not mean the same thing for people living in a continuum of the same mistakes again and again.

Every time I pass the UBC Pride Installation, I am grateful for its existence. But I also can’t help but imagine what could have happened if a queer artist had designed it or if queer people had painted it — if queer labour had been paid and prioritized.

Perhaps the same. But behind it would be us, painting a mural for ourselves, knowing that our university also values the work of our queer hands.

Moe Kirkpatrick is a second-year student, a volunteer of the Pride Collective and a Ubyssey staff writer.