Their Campus: A song of rebellion in Barcelona 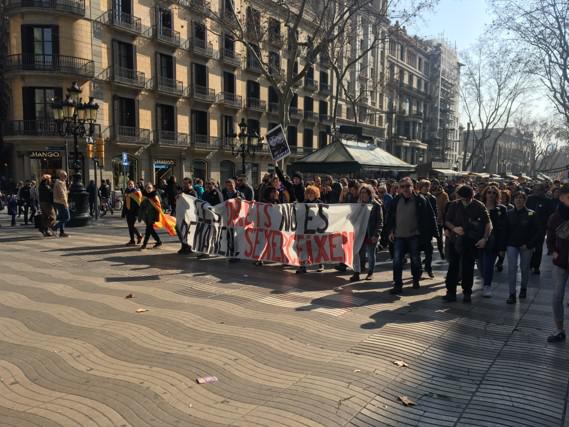 We marched with the locals, partly amazed at the mobilization we were seeing. Ricardo Zatz

I’ve always had a thing for politics. When I told my mother I managed to get a spot at Universitat Pompeu Fabra in Barcelona for a term abroad, it came as no surprise that the first thing she said back to me — congratulations aside — was “My son, do not get yourself mixed up in local politics.”

For the first month of my Barcelona experience, I heeded my mother’s command and steered clear of “political trouble,” but quietly attended talks, debates and conversations about the political situation to educate myself and better understand the reality in which I had been inserted. Since 2017, the region of Catalonia had been through a ‘rebellion,’ a change of government, a short-lived proclamation of independence and a frustrated independence referendum that ended with the arrests of 12 leaders and the exile of former President Carles Puigdemont.

Despite it having been almost two years since the 2017 riots, the air in Barcelona felt no less convoluted. Every building in every street hung at least one independence flag, turning the streets in the Eixample and Gothic quarters into a flurry of red, yellow and blue. Together with the flags, slogans reading “freedom to political prisoners” could be spotted on virtually every surface. Even some Republican flags from the time of the Spanish Civil War had been brought out and hung from some balconies again. To me, an outsider just arriving in a brand new city, the social climate in January 2019 seemed to me as if I had stepped off of a plane and into the mouth of a loaded cannon, about to blow. By the time February came around, I couldn’t pretend nothing was happening anymore.

It all started with a few rumours, and soon enough flyers started being seen on the walls calling for a student assembly to vote on a general strike. The trial of the 12 Catalan leaders arrested in 2017 under charges of sedition and rebellion for organizing the independence referendum was scheduled to begin on February 12. Since the Independentistes ­— “Independentists,” in a free translation — saw the trial as a farce. The leadership all over universities of Catalonia and Catalan workers’ unions started mobilizing for a general strike in solidarity with the defendants on the day of the trials.

The threat of a general strike was serious, coming to the point where Madrid postponed the trials for two weeks at the very last minute to try and break cohesion. Still, the strikers persevered and on February 21, I woke up to crowds taking the streets. Classes were cancelled. The university shut down. From outside my window in the Gothic quarter all I could see was an endless wave of people wrapped around independence flags, loud speakers reverberating messages in Catalan that could be felt through the walls of buildings and an overwhelming majority of young students leading and participating in the marches.

My friends and I agreed to meet at the halfway mark of the demonstration, at Plaça Univesitat. We marched with the locals, partly amazed at the mobilization we were seeing, partly nervous over what the government forces might do in response. It wouldn’t be the first time independence marches ended badly in Barcelona, and I had a vinegar bottle and an old t-shirt in my backpack, something I picked up after years of demonstrations in my home country to neutralize tear gas, just in case.

Luckily, things never got out of hand. Apart from the loud shouting and some banging of drums, the march was one of the most peaceful I’ve ever taken part in. The Guardia Civil never intervened and the mass of people moved along the whole trajectory of the march chanting and making their voices heard. Angry, yet peaceful.

As time passed, eventually the march clustered around Plaça Catalunya by the end of the afternoon. There, I witnessed one of the most beautiful events of my entire exchange: as people gathered in and around the square, I spotted out of the corner of my eye this kid and his friend climb up on top of a bus stop. He didn’t look any more than 18, nor did his friend. I looked on attentively as he, balancing himself on top of a surface definitely not intended to hold his own and his friend’s weight, pulled out of his bag and quickly assembled a golden trumpet. After a few seconds of tuning in, his friend pulled out a banner reading “freedom to political prisoners” and this anonymous trumpeter starts beautifully playing the anthem of Catalonia. Initially just the melody, after a few moments more and more voices started singing to it.

Within a minute, an entire half of a sea of people in Plaça Catalunya were singing. One thunderous voice, like the one you hear cheering, echoing within the walls of Camp Nou in a FC Barcelona game day, but this time to the anthem of their country-that-never-was. Sung in Catalan, it was a powerful song and the tone of the march reflected the imposing nature of it in full. Still, I couldn’t help but notice a tone of melancholy in the voices, too. Maybe I should have taken more Catalan courses, who knows, maybe I was just imagining things.

But I don’t think I’ll ever forget the feeling of being in a crowd, shoulder to shoulder with people singing at the top of their lungs to a song of independence, a song emanating from a single rebellious trumpeter atop a bus stop.