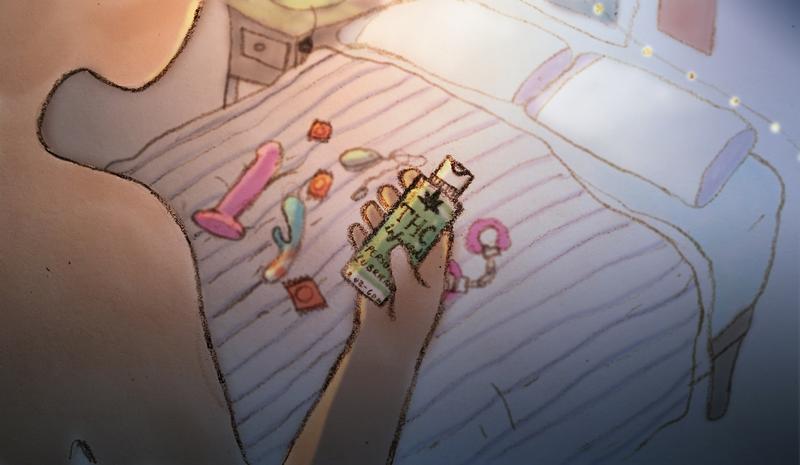 Weed lube is one of those things that happens when you take two pretty great things and smush them into one even greater thing, like brownie ice cream, or dipping fries your in your milkshake. Like brownie ice cream or milkshake fries, we can also be pretty sure it was invented by a stoner.

Sitting down in a back room that was mostly occupied by a massage table, we covered everything from the human endocannabinoid system to hypersensitive skin. The way she talked about weed’s power to heal was straight-up inspirational — in her own life, cannabis was more effective and less side-effective than her previous meds. Her mother, sister, and grandmother have all used the herb for different reasons.

One of her goals with the club is to change the stereotypical image of a couch-ridden, useless stoner: weed really has the power to help people, and she works in the perfect setting to see just how. “Our biggest customer base is seniors,” she said. “Dogs, too.”

I left the dispensary equipped with a half-pinky-sized phial full of amber-colored CannaMed Lady-Lube in my pocket, alongside a doob tube containing a small amount of Sutra Personal Lubricant by a brand called “Miss Envy.” My designated co-pilot was MIA, so I flew solo.

They were quite different from any lube I’ve tried before. For starters, both of them are amber-colored and smell like weed, though the Sutra cuts it with ylang ylang and lavender oil. Second off, they’re oil based. Unlike water-based lubes, they stay silky indefinitely, never getting sticky. Unlike silicon-based lubes, they flow easily and didn’t get gummy. Unlike both, they will thoroughly fuck up a latex condom, so I was happy not to need one.

The tiny phial of CannaMed felt immediately warm and tingly — if there ever were a clit-specific lube, this is it. I felt like I was rocking a few more nerve endings than usual. According to the internet, I should have waited 20 to 40 minutes for the THC to kick in, but patience has never been one of my strong suits. Maybe it was all placebo, but if so, it was highly recommendable placebo.

While folk medicines have prescribed cannabis as an aphrodisiac for centuries now, the science is very far from conclusive. On one hand, there is an unambiguous correlation between increased frequency of use and increased frequency of sex. On the other, weed affects people differently in the moment, from “cuddly & connected” to “disconnectedly stuck in your own head.”

At the end of the day, everyone reacts to weed differently. I’ve met people who love it more than anything, people who panic instantly at the smell, and one dude who said it made him strangely angry. I can’t say what dosage makes sense for you, how it’ll affect you, or even whether or not you’ll like it. But as far as I’m concerned, it’s worth my time to buy a full-size bottle of one of these guys.

As Krista puts it, “Just try it. It's honestly worth it. There isn't not going to be any downside unless you're allergic to something in here, but there are no health effects, nothing that it's going to mix with, that it's going to be bad for us all. I think it's just worth trying for people, if you're open.”