Last Words: What The Ubyssey wants to see from UBC in 2018 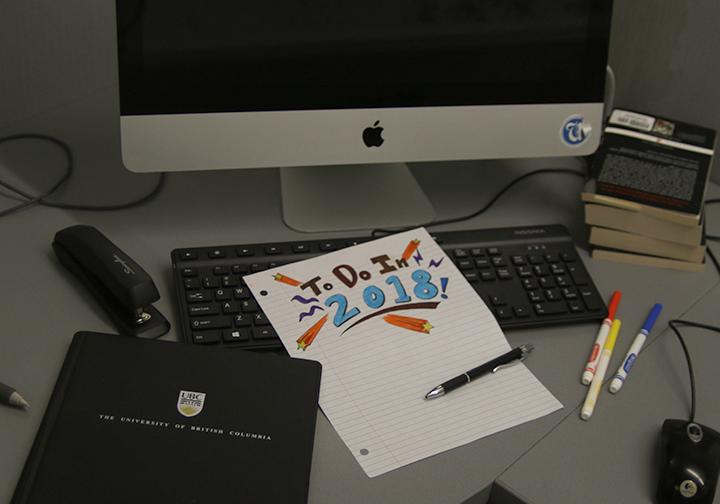 January is the time of year that we all are trying to get back into the swing of school and work, on top of trying to balance our New Year’s resolutions.

But these resolutions often fall through the cracks of our busy schedules, and UBC has a tendency to “forget” about what it previously said it would do. To help them out, The Ubyssey has compiled a list of things that we want to see from the university, that it can actually commit to.

As of last week, Rob McCloy is the new director of UBC’s Campus Security department. McCloy brings more actual security and safety experience that previous directors haven’t had — when former director Barry Eccleton was hired five years ago, they weren’t stringent about the person having a background in security (odd, we know). Eccleton was transferred to UBC Athletics last year after an externally conducted review recommended that the director role be tweaked to more accurately represent the campus’s needs and act as “the face and the voice of community safety for UBC.”

This is a testament to student feelings about Campus Security — although they can usually be counted on to report to specific incidences, their typical lack of a tangible presence (for instance, not many officers patrolling at night) has repercussions for how safe students feel. The external review found “a dissonance between the importance of safety on campus and the functioning of campus security found on campus,” we reported in 2016, and it’s about time UBC started implementing change based on that critique.

We hope that McCloy takes his 28 years serving various roles with the RCMP and uses that knowledge to not only respond to security infringements, but also to consistently emphasize a culture of safety and acceptance at UBC with more outreach and communication. More preemptives measures such as increased patrol officers and consistently functioning blue phones would also be nice.

All over UBC Confessions, Reddit threads, Twitter and other social media outlets are calls for support regarding student mental health. While UBC has certain plans in place — the Wellness Centre, SASC, Student Health Services, etc. — we are still seeing a lot of students seeking help but not receiving any in a timely manner. It is evident that UBC is not offering a strong sense of community.

In October, The Ubyssey published an editorial looking into a timeline of the fall reading break discussion, citing how Ono talks a big game regarding mental health issues on campus, but doesn’t seem to have a cohesive plan to actually address shortcomings.

More recently, we reported that UBC is still a ways away from getting a fall reading break. It appears that Senate is more concerned about students getting the best return on tuition rather than student well-being. But don’t students deserve the chance to recharge to be able to adequately do their work and be present in class?

The Indian Residential Schools History and Dialogue Centre at UBC was originally slated to open in the summer of 2017, but has now been pushed back to March 2018 with seemingly no announcement of the delay. The IRSC is “designed to be a history centre, but also to be a dialogue centre” according to UBC.

In August, The Ubyssey reported that Santa Ono planned to apologize for UBC’s role in the Indian Residential School System in late September, 2017. After confirming the apology and publicizing a live streamed discussion to take place the day after, UBC postponed the apology on September 26 — two days before the event — due to “a scheduling conflict.” We followed up on January 4, 2018 and were told that UBC would get back to us soon. The Ubyssey has still not received word on when Santa Ono’s apology will take place, and this is something we would like to see addressed moving forward.

We can’t report on important campus issues if we don’t get the right information. Some of our most important investigative reporting results from information we gain through freedom of information (FOI) requests to the UBC access and privacy office. Legally, UBC has 30 days to reply to FOI requests and has the option to tack on another 30 days if they need additional time to sift through the documents, but the vast majority of our requests take longer than the 60-day period the university is legally allowed.

As far as we can tell, this isn’t because the office’s employees are lazy — they’re just overworked. In 2015, we published an op-ed highlighting the fact that UBC needs add funding to the UBC Access and Privacy office to increase the timeliness and accuracy of their responses to FOI requests.

Fighting for student affordability, not against it

Due to some snazzy provincial legislation, UBC isn’t allowed to raise domestic students’ tuition more than two per cent every year — which they do, every year — but that hasn't stopped them from raising other fees and lobbying the government to remove the restriction.

It would be nice if UBC shifted its fight from the right to dump their financial problems on the backs of students to the fight for, say, increased federal and provincial funding for higher education, or — dare we say it — the fight for education as a human right.