Nobel laureate visits UBC ‘with the answers to the universe’ 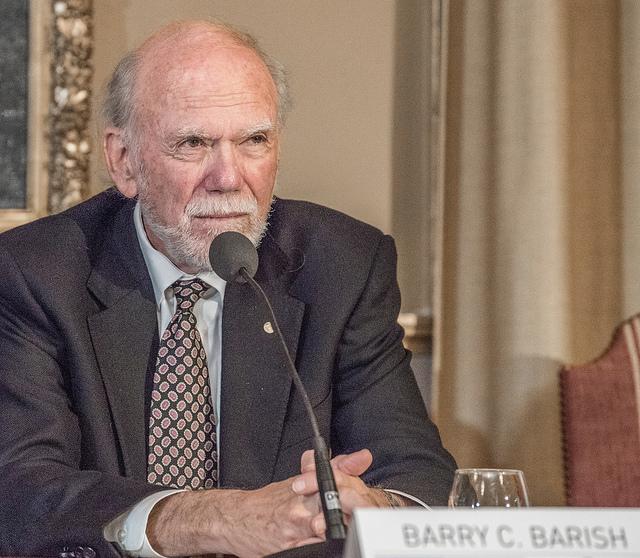 On September 14, 2015, the Laser Interferometer Gravitational-Wave Observatory (LIGO) detected the universe’s gravitational waves for the first time and altered our current understanding of astrophysics and general relativity. Although first predicted in 1916 by Einstein, there has been a lot of confusion over the years about whether this phenomenon is really possible.

Yet, the LIGO team proved the impossible when they detected waves coming from a collision between two black holes that took place 1.3 billion years ago. This inspiring contribution was awarded the 2017 Nobel Prize in physics, and UBC’s physics and astronomy department was lucky to host Dr. Barry Barish, one of the recipients of the prize, to talk about his findings on November 30, 2017.

Gravitational waves can be loosely quantified as ripples in spacetime caused by violent and energetic processes in the universe. Space-time, on the other hand, is the concept of time and three-dimensional space fused in a four-dimensional continuum, which Barish described as “space and time being unified in 4D.”

Barish began his talk by describing that space-time is extremely stiff and hence changes in distance are very small, which is why the observed effects are so small as well. As a result, although Einstein predicted the existence of gravitational waves, he himself was skeptical about successfully detecting them.

While Arthur Eddington observed the distortion in space-time during the solar eclipse of 1919, this skepticism resurfaced in January 1957 at the Chapel Hill conference.

But Barish said these apprehensions only inspired the scientists at LIGO to find more concrete evidence to support the existence of gravitational waves.

Einstein’s hypothesis stemmed from general relativity, which is special relativity — an experimentally determined theory relating space and time — that takes acceleration into account. Einstein’s mathematics proved that massive objects that accelerate towards each other would disrupt space-time in such a way that ‘waves’ of distorted space would radiate from the source.

Much like the speed at which gravitational waves travel, Barish broke down the norms of special and general relativity at the speed of light.

UBC students were also lucky to hear from the man himself how Einstein’s mathematics translated into their work.

“When this was but a theory, I couldn’t possibly tell a crowd that I firmly I believe in this but cannot justify it,” said Barish. “Yet, today I stand in front of you all with the answers to the universe.”

With the help of the extremely sensitive LIGO detectors and a mathematical rationale to show how gravitational waves affect the curvature of space-time, Barish really did have all those answers. Not only did these findings help scientists locate the origin of the wave, but they even changed the discipline by giving us a more comprehensive understanding of the nature of gravity itself.

The origin of these waves was traced back to a collision between black holes and the death of binary neutron stars. As Barish described them, “black holes are regions in space with strong forces of gravity that allow nothing to escape.”

Barish went on to explain that while the gravitational waves detected didn’t completely conform to the image Einstein had created as waves with no dispersion, this discovery still has several implications. Not only does it validate a longstanding confusion in astrophysics, it now provides us with a better way of looking at the discipline, while taking gravitational waves into account to explain new phenomenon.

Moreover, it is also a new proof for general relativity, without which the entire existence of gravitational waves would not be possible.

But these implications don’t stop Barish and his team from further pursuing this field.

“This is but a small step forward in revolutionizing astrophysics,” he said. “As is our motto, we learn from our mistakes, learn from other scientists, build on our existing work and try again.”